Cross a crow and it’ll remember you for years.

Crows and humans share the ability to recognize faces and associate them with negative, as well as positive, feelings. The way the brain activates during that process is something the two species also appear to share, according to new research being published this week.

“The regions of the crow brain that work together are not unlike those that work together in mammals, including humans,” said John Marzluff, University of Washington professor of environmental and forest sciences. “These regions were suspected to work in birds but not documented until now.

“For example it appears that birds have a region of their brain that is analogous to the amygdala of mammals,” he said. “The amygdala is the region of the vertebrate brain where negative associations are stored as memories. Previous work primarily concerned its function in mammals while our work shows that a similar system is at work in birds. Our approach could be used in other animals – such as lizards and frogs – to see if the process is similar in those vertebrates as well.” 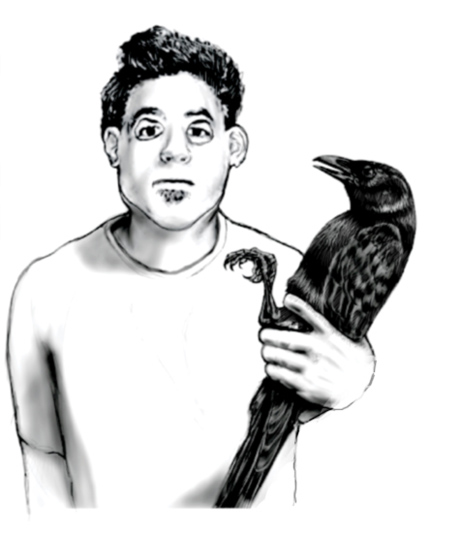 Crows were captured by investigators wearing threatening masks. Although never treated in a threatening way, the crows associated negative feelings with the mask. Image credit: Jack DeLap/U of Washington

Marzluff is the lead author of a paper being published the week of Sept. 10 in the online edition of the Proceedings of the National Academy of Sciences.

Previous research on the neural circuitry of animal behavior has been conducted using well-studied, often domesticated, species like rats, chickens, zebra finches, pigeons and rhesus macaques – and not wild animals like the 12 adult male crows in this study.

The crows were captured by investigators all wearing masks that the researchers referred to as the threatening face. The crows were never treated in a threatening way, but the fact they’d been captured created a negative association with the mask they saw. Then for the four weeks they were in captivity, they were fed by people wearing a mask different from the first, this one called the caring face. The masks were based on actual people’s faces and both bore neutral expressions so the associations made by the crows was based on their treatment.

In most previous neurological studies of animals, the work usually starts by sedating the animals, Marzluff said. Instead the approach developed by the UW involved injecting a glucose fluid commonly used in brain imaging into the bodies of fully alert crows that then went back to moving freely about their cages. The fluid flooded to the parts of the crow brains that were most active as they were exposed for about 15 minutes to someone wearing either the threatening or caring mask. 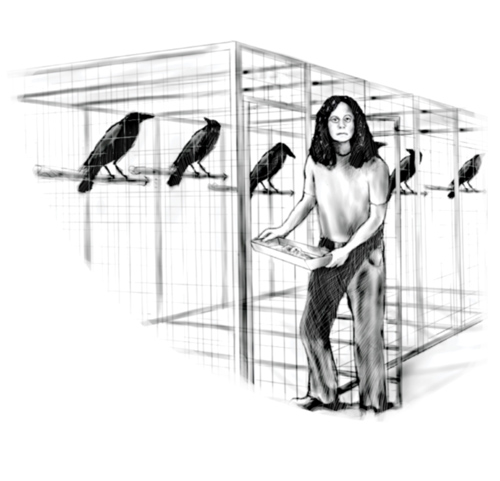 “Our approach has wide applicability and potential to improve our understanding of the neural basis for animal behavior,” wrote Marzluff and co-authors Donna Cross, Robert Miyaoka and Satoshi Minoshima, all faculty members with the UW’s radiology department. The department funded the preliminary work while the main project was conducted using money from theUW’s Royalty Research Fund.

Most neurological studies to date in birds have concerned their songs – how their brain registers what they hear, how they learn and come up with songs of their own. This new approach enables researchers to study the visual system of birds and how the brain integrates visual sensation into behavioral action, Marzluff said.

Among other things the findings have implications for lowering the stress of captive animals, he said.

“By feeding and caring for birds in captivity their brain activity suggests that the birds view their keepers as valued social partners, rather than animals that must be feared. So, to keep captive animals happy we need to treat them well and do so consistently,” he said. 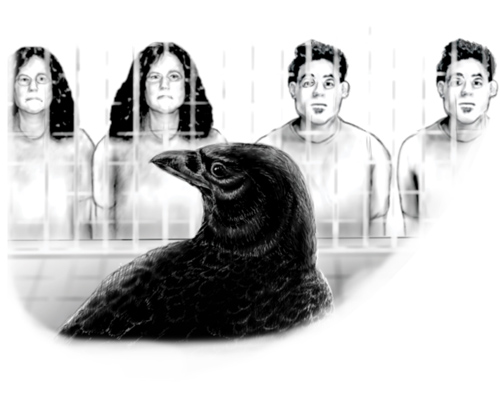 Before brain scanning, a crow was exposed on and off for about 15 minutes to a person wearing either a caring mask or a threatening mask, but not both. Image credit: Jack DeLap/U of Washington

Intriguingly, Marzluff said the findings might also offer a way to reduce conflict between birds and endangered species on which they might be feeding. In the Mojave Desert, for instance, ravens prey on endangered desert tortoises. And on the West and East coasts, crows and ravens prey on threatened snowy plovers.

“Our studies suggest that we can train these birds to do the right thing,” Marzluff said. “By paring a negative experience with eating a tortoise or a plover, the brain of the birds quickly learns the association. To reduce predation in a specific area we could train birds to avoid that area or that particular prey by catching them as they attempt to prey on the rare species.”

The partnering of neuroscientists with ecologists could be used to better understand the neural basis of cognition in widely diverse animals, said co-author Cross. For example, her suggestion to use the glucose technique prior to brain scans, so the crows could be fully awake, could be used for other animals.

“This was a true collaboration that would never be possible without the people that were involved with very different areas of expertise,” she said. 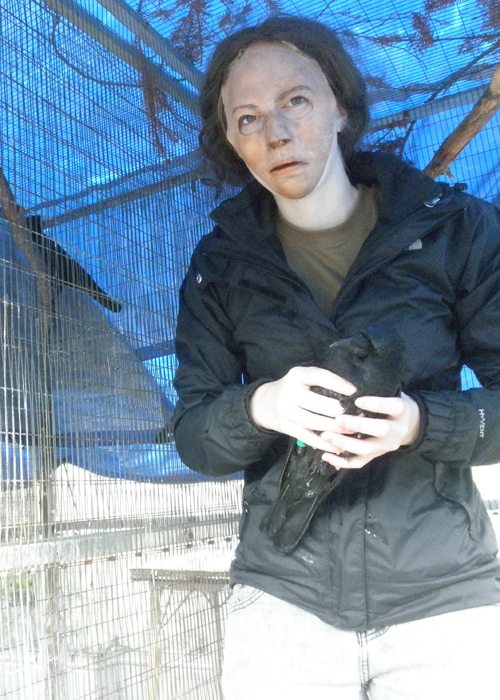 Ila Palmquist, a member of John Marzluff’s laboratory group, wears a threatening mask while catching and handling crows. The mask carries a neutral expression so the associations made by the crows was based on their treatment. Image credit: Marzluff Lab/U of Washington