During spring break the last five years, a University of Washington class has headed to the Nevada desert to launch rockets and learn more about the science and engineering involved. Sometimes, the launch would fail and a rocket smacked hard into the ground.

This year, the session included launches from a balloon that were deliberately directed into a dry lakebed. Far from being failures, these were early tests of a concept that in the future could be used to collect and return samples from forbidding environments – an erupting volcano, a melting nuclear reactor or even an asteroid in space.

“We’re trying to figure out what the maximum speed is that a rocket can survive a hard impact,” said Robert Winglee, a UW professor of Earth and space sciences, who heads that department and leads the annual trek to the desert. 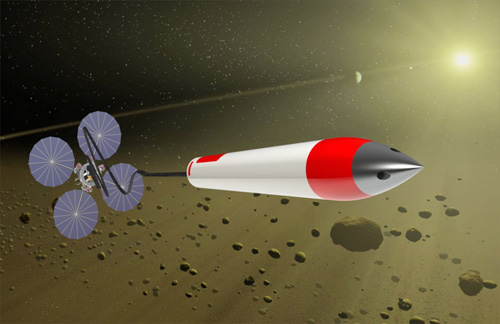 An artist’s conception shows a sampling rocket, with a tether linking a return capsule inside the rocket to a recovery craft. Image credit: Chad Truitt / UW

The idea for a project called “Sample Return Systems for Extreme Environments” is that the rocket will hit the surface and, as it burrows in a short distance, ports on either side of the nose will collect a sample and funnel it to an interior capsule. That capsule will be attached by tether to a balloon or a spacecraft, which would immediately reel in the capsule to recover the sample.

“The novel thing about this is that it developed out of our student rocket class. It’s been a successful class, but there were a significant number of rockets that went ballistically into the ground. We learned a lot of physics from those crashes,” Winglee said.

The technology, which recently received $500,000 over two years from NASA Innovative Advanced Concepts, could have a number of applications, he said.

On Earth, it would allow scientists a relatively safe way of recovering samples in areas of high contamination, such as Japan’s Fukushima Daichi nuclear power plant and the Chernobyl nuclear power facility in Ukraine, both of which suffered catastrophic failures. Or it could collect samples from an erupting volcano to give Earth scientists a better understanding of the processes at work during one of nature’s most violent shows. In either case, the tethered sample-return capsule could be hauled in by a balloon or a plane.

In space, the system could collect samples from a single asteroid or a series of them, with a “mothership” recovering the tethered capsules and returning them to Earth.

“It would be like taking a core sample before you go mining,” Winglee said.

He noted that there has been growing interest in possibly mining asteroids, both for finding substances that are in increasingly short supply on Earth, and potentially to find the natural resources to create fuel for long-term space missions.

For this project, Winglee is working with Robert Hoyt of Tethers Unlimited Inc. of Bothell, Wash., which has developed tether technology for use in space, on Earth and in the oceans.

In the first phase of testing earlier this year in Black Rock Desert, about 100 miles north of Reno, Nev., rockets were fired from an altitude of 3,000 feet. It turned out that wasn’t high enough for proper performance testing, Winglee said, but even then components of the system survived supersonic impact under rocket power.

The second phase of testing could take place in California next summer, with follow up tests a year later. Rockets would be fired from a higher altitude in an attempt to achieve twice the speed of sound, or about 1,520 mph.

UW Earth and space sciences faculty and students used a kite to hoist a rocket high above the Nevada desert in March 2013, then fired the rocket directly into a dry lakebed.