WORCESTER, Mass. – Expanding their scope of study on the mechanisms of bacterial infection, researchers at Worcester Polytechnic Institute (WPI) have reported the surprise finding from a small clinical study that cranberry juice cocktail blocked a strain of Staphylococcus aureus (S. aureus) from beginning the process of infection.

The data was reported in a poster presentation at the American Chemical Society’s national meeting in Boston on August 23, 2010, by Terri Camesano, professor of chemical engineering at WPI. “Most of our work with cranberry juice has been with E. coli and urinary tract infections, but we included Staphylococcus aureus in this study because it is a very serious health threat,” Camesano said. “This is early data, but the results are surprising.”

The virulent form of E. coli that Camesano studies is the primary cause of most urinary tract infections. Strains of S. aureus can cause a range of “staph infections” from minor skin rashes to serious bloodstream infections. One particular strain, known as Methicillin-resistant Staphylococcus aureus, or MRSA, is a growing public health problem in hospitals, nursing homes, and other institutions because it doesn’t respond to most antibiotics.

To cause an infection, bacteria must first adhere to a host, then gather together in colonies to form a biofilm. In the current study, Camesano recruited healthy female students at WPI to drink either cranberry juice cocktail or a placebo fluid that looked and tasted like cranberry juice. The subjects provides urine samples at prescribed intervals after drinking the juice or placebo, and those samples were incubated in petri dishes with several strains of E. coli and a single strain of S. aureus. 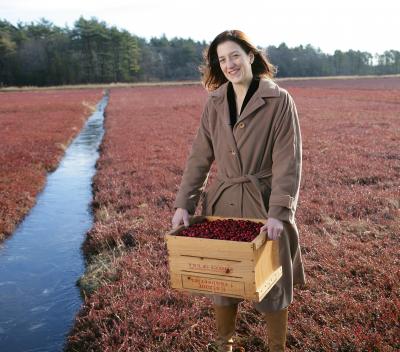 Camesano’s team stained the bacteria with a special dye, then used a spectrophotometer to measure the density of the bacterial colonies in the dishes over time. Their analysis showed that the urine samples from subjects who had recently consumed cranberry juice cocktail significantly reduced the ability of E. coli and S. aureus to form biofilms on the surface of the dishes.

“What was surprising is that Staphylococcus aureus showed the most significant results in this study,” Camesano said. “We saw essentially no biofilm in the staph samples, which is very surprising because Staph aureus is usually very good at forming biofilms. That’s what makes it such a health problem.”

With E. coli, Camesano’s focal point is the small hair-like projections known as fimbriae, which act like hooks and help the bacteria latch onto cells that line the urinary tract. Camesano has shown that exposure to cranberry juice causes the fimbriae on E. coli to curl up, blunting their ability to attach to cells. S. aureous, however, doesn’t have fimbirae, so there must be other reasons why the cranberry juice affected its biofilm formation in the study. “These results do create more questions than answers,” Camesano said. “We believe this is an important new area to explore, and we are now thinking about how best to proceed.”

Since bacterial adhesion is required for infection, Camesano hopes that better understanding of the specific mechanisms and forces involved in biofilm formation will help inform future studies aimed at identifying potential drug targets for new antibiotics. The data may also be useful in studies aimed at engineering the surfaces of invasive medical devices like catheters to make them more resistant to bacterial adhesion.

The research detailed in the current study was supported by grants from the Cranberry Institute and the Wisconsin Cranberry Board.