Astronomers have solved a 21-year-old cosmic mystery with the discovery of a star whose companion exploded, confirming that the surviving star was partly responsible for the resulting supernova. A team of 12 scientists, including the University of Chicago’s Vikram Dwarkadas, recently published the discovery in the Astrophysical Journal.

Supernovae happen approximately once a second somewhere in the universe and are classified according to their characteristics. Massive stars, the like one that exploded, successively burn heavier elements to produce energy that opposes the gravitational pressure caused by their huge mass.

“Once they reach an iron core, they no longer produce enough energy to support the massive envelope, which collapses on itself, causing the star to explode,” said Dwarkadas, senior research associate in astronomy & astrophysics. “The stellar material expands outwards at an astonishing 10,000 kilometers per second, resulting in a supernova.” 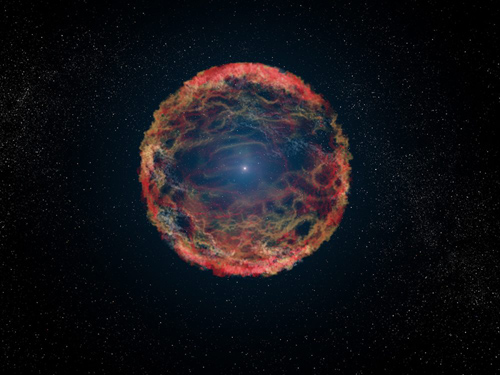 This is an artist’s impression of supernova 1993J, an exploding star in the galaxy M81 whose light reached Earth 21 years ago. The supernova originated in a double-star system, in which one member was a massive star that exploded after siphoning most of its hydrogen envelope to its companion star. After two decades, astronomers have identified the blue helium-burning companion star, seen at the center of the expanding nebula of debris from the supernova. The Hubble Space Telescope identified the ultraviolet glow of the surviving companion embedded in the fading glow of the supernova. Image courtesy of ESA and G Bacon (STScI), NASA

The one in question, named SN 1993J for the year its light was detected, is located in galaxy M81. This is approximately 11 million light years away, the astrophysical equivalent of just across the street.

SN 1993J is classified as a rare Type IIb, which means that it was a collapsing massive star, but it had much less hydrogen than its counterparts at the time of the explosion. “This has generally been understood by invoking the existence of a nearby companion star that pulls the hydrogen envelope away from the primary star before it explodes,” Dwarkadas said.

How the primary star lost its hydrogen was the mystery, and solving it would lead to a deeper understanding of the conditions surrounding supernova formation. If this were a murder case, the team researching the supernova would have to prove the murderer—the companion star—existed.

Dwarkadas was part of the international team that used NASA’s Hubble Space Telescope to confirm the companion star’s existence. The team included Alex Filippenko, professor of astronomy at the University of California, Berkeley.

“When I first identified SN 1993J as a Type IIb supernova, I hoped that we would someday be able to detect its suspected companion star,” Filippenko said. “The new Hubble data suggest that we have finally done so, confirming the leading model for Type IIb supernovae.”

Pinpointing the glow of the companion star in the glare of the supernova could be compared to finding a single LED in a field of football stadium floodlights. However, light from a supernova dims over time, potentially allowing the companion to be seen at a later stage.

Dwarkadas and his colleagues used the Hubble Telescope to chart the brightness and sieve through the light of the supernova to find the companion star. They found a surplus of ultraviolet light emission left over after they subtracted the light of the supernova and other stars visible in the telescope’s field of view. The extra light matched that predicted for the companion star from theoretical models, and they concluded that they had found the companion.

“This experiment was like a Sherlock Holmes case, where once all other possibilities were discarded, what remains must be the truth,” said Dwarkadas.

Further observations are needed to provide beyond doubt that the star is present. The team has been awarded more time on the Hubble Telescope to do exactly that.