A composer, a president, and a dean share in conversation about creativity and expression

While working on a new piece, composer John Adams sometimes has to experience a deep sense of failure before his ideas really start to flow.

“You can win every prize in the book … but when you are alone with yourself in that room and what you are doing is not even worthy of a five-year-old — you can’t imagine how humiliating that is,” he told an audience in Sprague Memorial Hall on Oct. 16. “You have to get to that level of abject humility to finally get to point of being receptive, then ideas come. Usually when they come they’re dressed in extremely shabby clothes. You just have to go with it.”

The renowned American composer and conductor, on campus for a weeklong residency at the School of Music, spoke about his creative process in a conversation with Yale President Peter Salovey and School of Music Dean Robert Blocker. He went on to compare the initial flow of creativity to new growth in a petri dish. As his composition begins to take shape, he told his audience, he then becomes more like a gardener, deciding where to “trim” and how to “feed” what he has created, a process that “involves intuitive taste and judgment.” 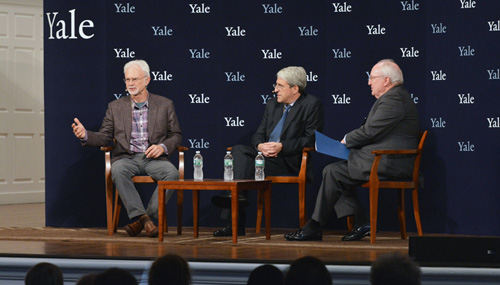 Adams’ orchestral scores — among them  “Shaker Loops,” “Harmonielehre,” “Short Ride in a Fast Machine” and Violin Concerto — are among the most frequently performed compositions by a contemporary American composer. He is also the composer of numerous operatic works, including “Nixon in China,” “The Death of Klinghoffer,” and “Doctor Atomic.” Among his recent works are the Passion oratorio “The Gospel According to the Other Mary,” “Absolute Jest,” and the Saxophone Concerto. His numerous honors include an honorary doctorate from Yale in 2013.

Blocker moderated the Sprague Hall discussion, which covered such topics as the roles of the artist, creativity, and free expression at a university. The School of Music dean asked Adams how he selects the topics or themes of his works, alluding to the controversy that has surrounded Adams’ opera “The Death of Klinghoffer,” which is based on the hijacking of the passenger liner “Achille Lauro” by the Palestine Liberation Front in 1985 and the murder of wheelchair-bound passenger Leon Klinghoffer. (Last summer, the Metropolitan Opera, which will soon stage the opera, cancelled its live HD transmissions of those performances amidst complaints that they might fuel anti-Semitism.)

“You are speaking to me about controversy?” quipped Adams, before answering: “I’ve done some theatrical works that I consider to be American versions of our own mythology. … I feel Americans’ mythology really comes from the news, from significant public events. … The operas I’ve chosen prod the collective unconscious of society.” He noted that his opera “Nixon in China” explores the “collision” of the capitalist and social welfare states, while “Dr. Atomic,” about the development of the atomic bomb, is “the image of man and his power” and the “marvel of science and the horrible danger” that can result from scientific advances. In addition to the theme of terrorism, “The Death of Klinghoffer,” the composer said, is about “how people scream at each other without listening.”

Salovey spoke of the importance of free expression in the setting of the university, which he said must be a place “where controversial ideas can be expressed and debated.” He noted that he made free expression the topic of his address to the freshmen class this year, and said that while civility, tolerance, and mutual respect are also important values that should be encouraged on campus, these values cannot result in a sacrifice of the free expression and exchange of ideas.

“We have to put up with a certain amount of discomfort,” Salovey said, adding, “We are an environment in which we are willing to listen to anything, even if it offends us. [And] if it does, we have an obligation to speak back to it.” Free expression, he continued, is “fundamental to creativity and change.”

Adams noted that of all of the art forms, music is the most emotionally expressive. Salovey agreed, and shared how he once was engaged in a psychology research experiment which called for its subjects to feel sorrow, an emotion that was elicited by the playing of a Prokofiev piece titled “Russia Under the Mongolian Yoke” at half speed. “People would weep,” recalled Salovey.

Of his own musical performance as a member of the band Professors of Bluegrass, Salovey said he never had any formal training in his instrument, the double bass, which he plays by ear.

“The only way I can do this, not having training — and playing with three people who are better musicians — is to really concentrate. In the moment I find flow, if I think about anything else, I screw up the rest of the band. I need all my capacity to play.”

Adams commented that he, too, must find space that is free of distraction for his creativity to flow.

“If I’m in shape — very much like an athlete —things come more regularly,” he said.

During his time on campus, Adams will also conduct a concert on Oct. 17 featuring his concerto “Absolute Jest,” in addition to Beethoven’s Symphony No. 4 and Stravinsky’s “Orpheus.” He has also taken part in classes and discussions with School of Music students.

In one of those, Martin Bresnick’s composition class, Adams spoke to the students about their engagement with popular culture, and warned them of its pitfalls, he told his Sprague Hall audience.

“I think it’s wonderful that young composers draw a lot from popular culture,” said Adams, noting how artist Andy Warhol successfully made use of the vernacular in his art. “What sometimes worries me is the tendency to become so bedazzled by popular culture that one neglects deep learning.”

Salovey touched upon the same theme during the discussion, during which he said art allows its practitioners to achieve what has never been done before. But in every profession, he added, the individuals who stand out are those who learn from what has already been accomplished but are then willing to set out in unchartered territory.

“The pressures to conformity are high,” said Salovey. “But the great ones are the ones who say ‘I understand that, I respect that, but now I’m going down my own road.’”