*A new study finds that low concentrations of the chemical methylisothiazolinone has subtle but measurable negative effects on the neural development of tadpoles. The chemical is found in some cosmetics, although the study does not provide any evidence that cosmetics are unsafe for humans.*

PROVIDENCE, R.I. [Brown University] — Scientists, health officials, and manufacturers already know that a chemical preservative found in some products, including cosmetics, is harmful to people and animals in high concentrations, but a new Brown University study in tadpoles reports that it can also interrupt neurological development even in very low concentrations.

In the cosmetics industry, the biocide methylisothiazolinone or MIT, is considered safe at concentrations of less than 100 parts per million. Lab studies, however, have found that lower concentrations affected the growth of animal neurons. Picking up from there, the Brown researchers performed a series of experiments to investigate how 10 days of exposure at concentrations as low as 1.5 ppm would affect whole, living tadpoles as they develop. Their results appear in advance online in the journal Neuroscience. 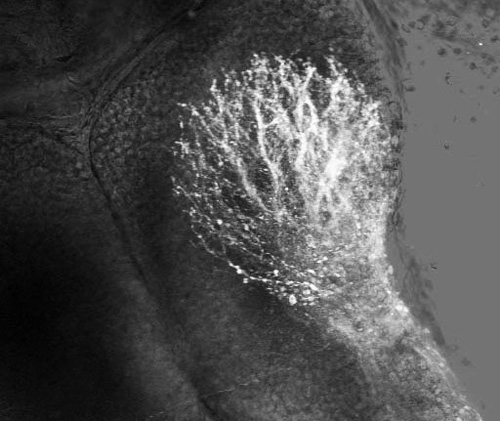 Interrupted development. Even small concentrations — 1.5 parts per million — of a biocide used in cosmetics interrupted neurological development in tadpole brains. There is no evidence those concentrations are harmful to humans. Image credit: Aizenman lab/Brown University

“The lower concentrations we studied didn’t kill the animals or cause any big deformities or affect the behavior you’d see just by looking at them,” said Carlos Aizenman, associate professor of neuroscience and the study’s senior author. “But then we decided to do a series of functional tests and we found that exposure to this compound during a period of development that’s critical for the fine wiring of the nervous system disrupted this period of fine tuning.”

Aizenman emphasized that there is no evidence in the study that any products with MIT, such as shampoos or cosmetics, are harmful to consumers.

When Aizenman and lead author Ariana Spawn explored the consequences of exposing tadpoles to two nonlethal concentrations, 1.5 ppm and 7.6 ppm, they found some deficits both in behavior and in basic brain development.

In one experiment they shined moving patterns of light into one side of the tadpole tanks from below. As they expected, the unexposed tadpoles avoided the light patterns, swimming to the other side. Tadpoles that had been exposed to either concentration of MIT, however, were significantly less likely to avoid the signals. 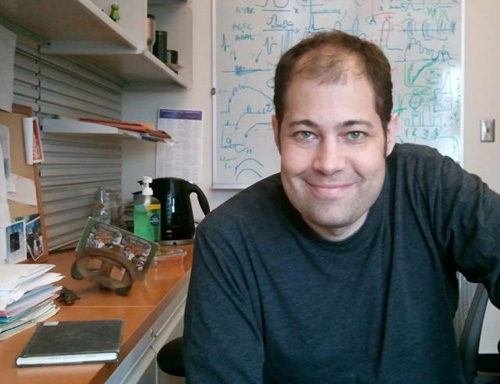 In another experiment, Aizenman and Spawn, who was an undergraduate at the time and has since graduated, exposed the tadpoles to another chemical known to induce seizures. The tadpoles who were not exposed to MIT and those exposed to the lower concentration each had the same ability to hold off seizures, but the ones who had been exposed to the 7.6 ppm concentration succumbed to the seizures significantly more readily.

In these experiments, seizure susceptibility had nothing to do with epilepsy, Aizenman said, but was instead a measure of more general neural development.

After observing the two significant behavioral effects in the tadpoles, Aizenman and Spawn then sought the underlying physiological difference between exposed and unexposed tadpoles that might cause them. They performed an electrophysiological analysis of each tadpole’s optic tectum, a part of the brain responsible for processing visual information. They found evidence that the chemical seems to have stunted the process by which tadpoles prune and refine neural connections, a key developmental step.

Aizenman said consumers should know about the study’s results and pay attention to the ingredients in the products they use, but should not become worried based on the basic science study.

Aizenman said one area where further studies may be warranted is in cases of repeated exposure in industrial or occupational settings, but the study’s broader message may be that chemical manufacturers and independent labs should test more for neurodevelopmental effects of even low concentrations of products. In the specific case of MIT in tadpoles, he noted, “It’s resulting in a non-obvious but real deficit in neural function.”

Brown University and the Whitehall Foundation funded the research.