For corals adjusting to climate change, it’s survival of fattest and most flexible

The future health of the world’s coral reefs and the animals that depend on them relies in part on the ability of one tiny symbiotic sea creature to get fat — and to be flexible about the type of algae with which it cooperates.

In the first study of its kind, scientists at the University of Delaware and Ohio State University discovered that corals — tiny reef-forming animals that live symbiotically with algae — are better able to recover from yearly bouts of heat stress, called “bleaching,” when they keep large energy reserves — mostly as fat — socked away in their cells.

“The response of coral reef ecosystems to global climate change is of significant concern to those of us who study the ocean,” according to Mark Warner, a professor in UD’s College of Earth, Ocean, and Environment (CEOE). “When ocean waters warm, corals get stressed and release their symbiotic algae, making them turn white, or bleach. Our research showed that some coral species rebound after annual bleaching events, but others get progressively more susceptible.”

“We concluded that annual coral bleaching could cause a decline in coral diversity, and an overall decline of coral reefs worldwide, ” said Andréa Grottoli, professor in the School of Earth Sciences at Ohio State and co-author of the paper. 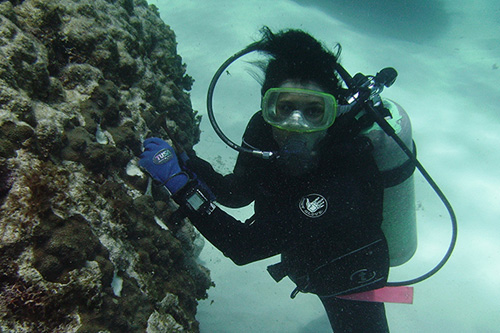 The study, which appears in the July 9 online edition of Global Change Biology, indicates that some coral species will almost certainly decline with global climate change, while others that exhibit large fat storage and flexibility in the types of algae they partner with will stand a better chance of enduring repeated rounds of stress as oceans get hotter.

It also suggests that the hardiest species would make good targets for conservation efforts because they are most likely to survive.

“If we conserve reefs that contain coral species with these survival traits, then we’re hedging our bets that we might be able to preserve those reefs for an extra decade or two, buying them enough time to acclimatize to climate change,” Grottoli said.

Corals are essentially colorless; the brilliant browns, yellows, and greens that are associated with them are actually the colors of algae living inside the corals’ animal cells. That’s why, when stressed coral dump most of the algae from their cells, their bodies appear pale, or “bleached.”

Bleached corals can recover by growing more resident algae or acquiring new algae as water temperatures return to normal. This research shows that changes in the type of symbiotic algae has a large effect on their recovery.

But if corals don’t recover and reefs die, thousands of fish species and other sea creatures lose their habitat. 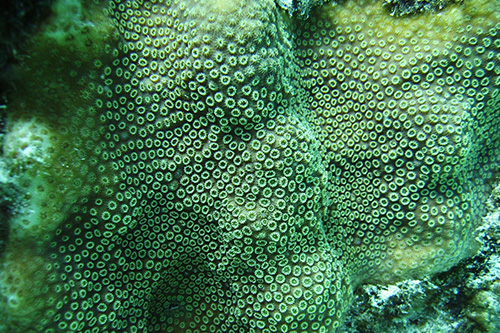 Normally, bleaching is a rare event. But by 2025, Caribbean waters are expected to be hot enough that the coral living there will be stressed to the point of bleaching once a year. The rest of the tropics are expected to experience annual bleaching by 2050.

Warner, whose primary appointment is in CEOE’s School of Marine Science and Policy, explained, “While both warming waters and ocean acidification are of concern for corals and are happening simultaneously, we will see the affects of warming temperatures on corals more immediately.”

Previous studies have only followed coral through one bleaching event, or through two events several years apart. So the team tested what would happen if they subjected some common Caribbean corals to bleaching for two years in a row.

Corals can supplement their diet by eating plankton, but they get most of their energy from their symbiotic relationship with algae. The algae get nutrients from the coral, and the corals get to siphon off sugars that the algae produce in photosynthesis. Like humans, corals can store excess energy as fat. 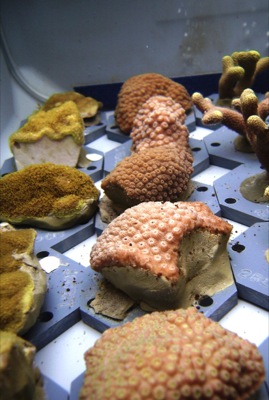 Two key survival strategies emerged in this study. The most resilient corals stored up fat reserves in times of plenty, and were able to switch to a new dominant algal type in order to gather food in times of stress. Corals that didn’t store fat or were stuck with their original algal partner didn’t fare as well.

And species that bounced back from one round of bleaching didn’t necessarily bounce back a second time.

“We found that the research on single bleaching events can be misleading,” Grottoli said.  “Species that we think are resilient to temperature stress are actually susceptible and vice versa when stressed annually.”

The research team tested three corals from Puerto Morelos Reef National Park, off the coast of Mexico. Two years in a row, they plucked samples of Porites divaricata, Porites astreoides, and Orbicella faveolata — more commonly known as finger coral, mustard hill coral, and boulder coral — from the ocean floor, and placed them in warm water tanks in an outdoor lab until the corals bleached.

Both times, the researchers returned the corals to the ocean to let them recover. They measured several indicators of how well the different species recovered, including the number and type of algae present in the corals’ cells and remaining energy reserves.

The mustard hill coral kept lower fat reserves, and partnered with only one algal species. It recovered from the first round of bleaching but not the second.

The boulder coral kept moderate fat reserves, but partnered with six different algae and changed between dominant algal types following each bleaching. It recovered from both rounds of bleaching, though it’s growth slowed.

The real winner was the finger coral, which switched completely from one algal partner type to another over the course of the study, and had the largest fat reserves — 47 percent higher than the boulder coral or mustard hill coral. The finger coral was barely even affected by the second bleaching and maintained a healthy growth rate.

The bottom line is that as some species adjust to climate change and others don’t, there will be less diversity in reefs, where all the different sizes and shapes of coral provide specialized habitats for fish and other creatures. Interactions among hosts, symbionts, predators and prey would all change in a domino effect. Reefs would be more vulnerable to storms and disease in general.

“We’re actually a bit optimistic, because we showed that there’s acclimation in a one-year window, that it’s possible,” Grottoli said. “In two of our three coral species, we have recovery in six weeks. The paths they took to recovery are different, but they both got there.”

CEOE brings the latest advances in technology to bear on both teaching and conducting ocean, earth and atmospheric research. Current focus areas are ecosystem health and society, environmental observing and forecasting, and renewable energy and sustainability.