Copper alloys may make more hygienic cooking surfaces than stainless steel, according to a recent study by Sadhana Ravishankar of the UA department of veterinary science and microbiology. Her lab group discovered that copper alloys have antimicrobial effects against the foodborne pathogen Salmonella enterica.

Each year a tiny, rod-shaped species of bacteria with a fondness for proliferating on human food causes numerous cases of food poisoning around the world, sometimes leading to severe illness and even death.

The culprit, Salmonella enterica, is a leading cause of diarrheal illness worldwide, said Sadhana Ravishankar, an assistant professor in the University of Arizona department of veterinary science and microbiology.

But Ravishankar’s lab may have discovered a way to reduce the number of food poisoning cases due to Salmonella and possibly other bacteria: prepare food on surfaces made with materials that contain some amount of the element copper, known as copper alloys.

Ravishankar’s lab collaborated with Chris Rensing, formerly an associate professor in the UA department of soil, water and environmental sciences and now at Research Triangle Institute International, for the study, which was published recently in the journal Food Microbiology.

“Chris Rensing had already done some research with copper, and he knew that copper surfaces have antimicrobial activity,” said Ravishankar. 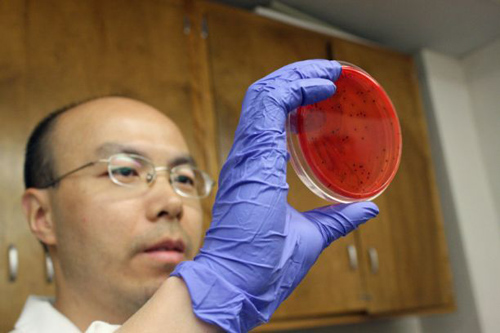 Libin Zhu, Sadhana Ravishankar's lab manager, tested the survivability of Salmonella on copper alloys with varying copper concentrations. The bacteria cells sometimes died out on copper surfaces within hours, while they survived for up to two weeks on stainless steel. (Photo by Beatriz Verdugo/UANews)

The International Copper Association donated six samples of copper alloys for the study, including samples of copper mixed with metals such as nickel, iron, chromium, phosphorous and tin that varied in their copper concentration from 60 to 99.9 percent.

Copper is harmful to bacteria because it reacts with oxygen in the atmosphere over time in a process called oxidation, which produces a residue that is toxic to some bacteria. Oxidation is what makes pure copper change in color over time from a rusty gold to a watery green.

“We decided to see the antimicrobial effect of all these copper alloy surfaces on Salmonella,” said Ravishankar. Salmonella was selected as the microbial guinea pig for the study because of its prevalence and the significant harm it causes worldwide because of diarrheal disease.

“Salmonella has caused outbreaks from eating a broad range of different types of foods, including meats and poultry, dairy products, peanut products, ice creams and even chocolate,” said Ravishankar.

Ravishankar found that because of oxidation, food contact surfaces made of materials containing copper are far less habitable for bacteria than stainless steel, which showed no antimicrobial properties at all. 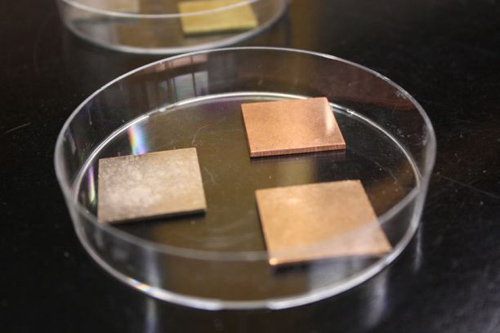 The researchers tested the survivability of Salmonella on six different copper alloys. Bacteria die out on surfaces containing copper much more quickly than on stainless steel surfaces, owing to the antibacterial properties of copper. (Photo by Beatriz Verdugo/UANews)

One test by Ravishankar’s lab manager, Libin Zhu, showed that Salmonella can survive for longer than two weeks on stainless steel surfaces. By contrast, the bacteria showed significant reductions on copper alloys.

In most cases, Salmonella on steel surfaces dropped in concentration from 10 million cells to 1 million cells, said Zhu. However, on copper alloys, the concentrations of bacteria dropped by a far greater number, to 100 cells or less.

“We tested three copper-resistant strains and one copper-sensitive strain,” said Zhu. Copper-resistant strains are lineages of bacteria that have been exposed to copper for several generations, long enough for the cells to develop genetic resistance to its antimicrobial effects. Copper-sensitive strains, by contrast, have never been exposed to copper and are much more susceptible to the toxicity of oxidation.

The researchers placed small samples of each of the Salmonella strains onto the copper alloys, and stored them at different conditions to simulate different types of food processing environments in which the bacteria might exist.

“Salmonella can be a problem in dry foods and wet foods,” Ravishankar said. 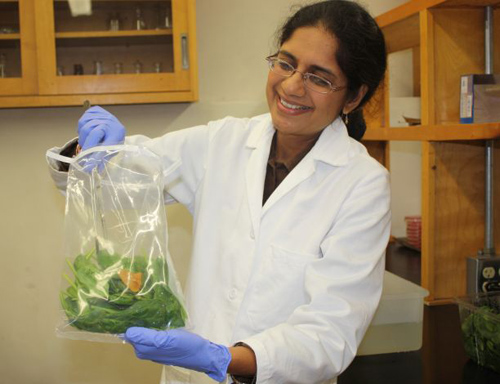 Sadhana Ravishankar, an assistant professor in the UA department of veterinary science and microbiology. (Photo by Beatriz Verdugo/UANews)

Salmonella survived for longer in the simulated wet conditions than in dry conditions, Zhu said. In addition, “copper resistant strains under dry conditions only survive for about 15 minutes – just about five minutes longer than the sensitive strain.”

In dry conditions, oxidation occurs more quickly because the copper in the surface comes into contact with oxygen in the air. 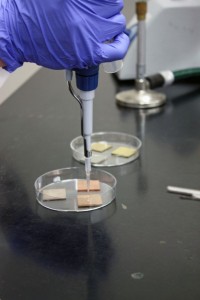 The researchers replicated the environments in which bacteria might grow on food contact surfaces. Closed plates reproduced the effects of a wet surface by not allowing humidity to escape, while open plates such as these reproduced a dry surface. (Photo by Beatriz Verdugo/UANews)

This is still much less than the two weeks survival achieved by Salmonella on stainless steel, leading the researchers to their conclusion: Copper alloys may be more hygienic surfaces for food processing and preparation than stainless steel.

Ravishankar said she would like to do further tests to see if organic materials on a food contact surface, such as crumbs wedged in cracks or leftover protein residues or grease from oils, could change the effectiveness of copper alloys as antimicrobial agents.

“In a food processing environment, there are going to be hard-to-reach areas where you can still have food particles,” said Ravishankar. “We want to see if the presence of food particles or some kind of organic matter on the copper surfaces changes the efficacy of the copper alloy. Does it become less effective, or is it equally effective?”

Using pure copper is not currently an option, Ravishankar said, due to the high cost of pure copper, and also due to as-yet unresolved concerns that high concentrations of copper residues could potentially have toxic effects on humans as well, if they were ingested.

In the meantime, while using copper alloys as cooking surfaces instead of stainless steel may be slightly more costly, “it will be worthwhile,” Ravishankar said. The high antimicrobial potency of copper alloys, she said, has the potential to significantly reduce cases of food poisoning.

Ravishankar’s study was funded by the International Copper Association, with preliminary research supported by Ravishankar’s start-up funds from the UA College of Agriculture and Life Sciences.