Engineering principles developed only 150 years ago were found to have evolved first in biological circuitry that controls cell growth, according to new UA research.

In the last 150 years, engineers have developed and mastered ways to stabilize dynamic systems, without lag or overshoot, using what’s known as control theory. Now, a team of University of Arizona researchers has shown that cells and organisms evolved complex biochemical circuits that follow the principles of control theory, millions of years before the first engineer put pencil to paper.

Consider your home air conditioner, for example. You set the temperature to 82 degrees and leave for work. When you return after a long, hot day, you set the temperature to 72 degrees. Your air conditioner then blasts cold air into your home until the thermostat reaches 72. This is an analog for what’s called feedforward control – your thermostat sets a goal, gets as close to 72 degrees as fast as it can, and turns off when it meets the goal.

The remainder of the evening, your air conditioner senses when the temperature deviates from 72 and turns on in small bursts to maintain a stable temperature. This is an analog for a feedback control, where small fluctuations away from the set temperature feedback onto the controller and cause the system to adjust. 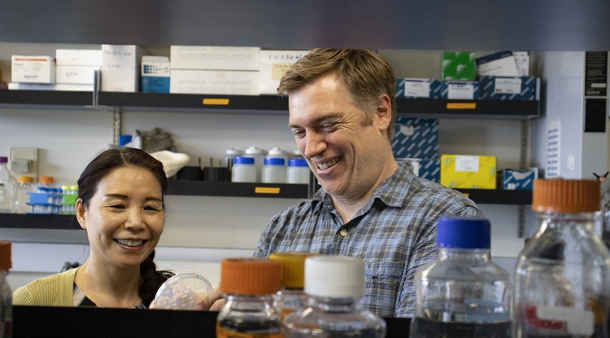 From left: Senior Research Scientist Xiangxia Luo and Andrew Capaldi, associate professor of molecular and cellular biology, examine cell lines they built that allow them to turn the TOR and PKA pathways on and off using drugs. (Photo credit: Michele Vaughan)

A UA team discovered that the coupling of two interconnected biochemical circuits within a cell – the TOR and PKA pathways – work like a thermostat to control the growth of cells in response to the availability of nutrients. For decades, it has been known that mutations in both PKA and TOR cause disease; The new research found that each pathway has its own distinct role and teased out exactly how and why the two pathways work together.

The study, published in Nature Communications, was led by associate professor of molecular and cellular biology and BIO5 Institute member Andrew Capaldi. He and his team wanted to know, if TOR and PKA both activate genes that cause cells to grow and turn on and off in response to nutrients, then why does the cell need both pathways to control growth?

Cells are constantly adapting to what’s available in their environment. They discovered that when a cell has a steady availability of nutrients, the TOR pathway makes sure the cell chugs along at an appropriate (matched) pace. But when a cell suddenly gets rich in a certain nutrient, the PKA pathway shifts into gear and triggers a 25-fold increase in gene production before turning itself off and letting the far more precise TOR controller take over again. Without PKA, TOR’s response to the influx of nutrients would lag.

“If you just have the TOR pathway, you’d always replicate at a good pace. The problem would be that when the conditions change, it would take a cell hours to adjust its growth rate. So nature added PKA,” Capaldi said. When you run out of nutrient, PKA can also quickly shut things down to let TOR take over again. “What’s happening is you have two controls – one whose job it is to speed up the response, and the other to keep it exactly right.”

Chemical engineers use the same principle to tightly control temperature.

“Often, chemicals must maintain a certain temperature or you’ll end up with unwanted side reactions. So, engineers include a thermostat inside the chemical mixing chamber,” Capaldi said. “Let’s say the next stage of a reaction is going to create a ton of heat. They use a feedforward control like PKA to quickly adjust the temperature, and then feedback control takes over to keep it steady like TOR.”

Because cells must be incredibly precise, cellular pathways are numerous and complex.

“Our cells have 30,000 proteins, and biologists have shown that if there’s anything wrong in one of a few thousand that control growth, then you can get a disease,” Capaldi said. “That is because these pathways do not work as simple on-and-off switches. As we have shown in our new study, they act like complex circuits, even computers.”

In fact, like computers, signaling networks have what are called hubs. The TOR and PKA pathways act as hubs because they are highly connected to each other, as well as hundreds of other proteins and pathways in the cell. As a result, when either of these hubs get broken the whole system goes down, just as we find with the internet.

“The most important take-home message is to think about all the different pathways in a cell in this way – that is, think about how pathways work together to provide precise control. We won’t be able to design truly effective drugs until we do,” he said.

“I want our research to continue along the same theme,” Capaldi added. “We’ll keep trying to figure out how different pieces of the growth-control network work together. There are hundreds and hundreds of signaling pathways that are interconnected, but we still don’t know how or why they talk to each other. There is just so much we still have to learn.”