However, the name of one of the key contributors to the work, which is detailed in the online version of the Proceedings of the National Academy of Sciences, is not listed among the paper’s authors. That’s because it’s a cluster of computers.

Through a collaboration between plant and computer scientists, MSU researchers figured out how certain genes in a plant turn on and off depending on the stress the plant is experiencing, be it cold or heat, drought or too much water, or bacterial infection.

The genome of the plant that was studied, the Arabidopsis thaliana, contains more than 25,000 genes. Of those, about 3,000 to 10,000 are used to cope with extremes under just one particular stress.

The question is: What combination of factors has to occur to make the right genes switch on at precisely the right environment? 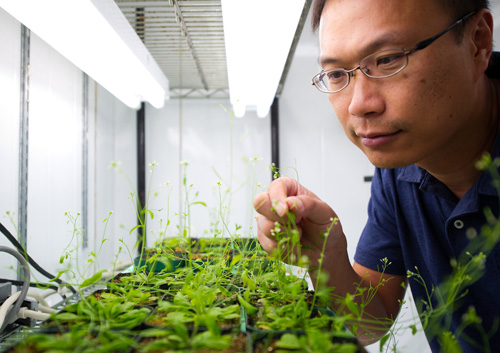 Shin-Han Shiu is an associate professor of plant biology at MSU. He and colleagues recently published a paper in the Proceedings of the National Academy of Sciences detailing how plants are able to cope with extreme environments. Photo by G.L. Kohuth

“Until now, we did not know how these genes were turning on and off at a genome-wide scale,” said Shin-Han Shiu, a plant biologist who was a member of the research team. “Now we have a better idea of how these work, and that will give us more opportunity to control the genes to help them cope with extremes.”

The switches that essentially turn on and off the necessary genes are called cis-regulatory elements. By using the artificial intelligence of computers, Shiu and colleagues got a better handle on how they operate. The computers were able to run myriad switch combinations simultaneously to speed the research along.

“Suppose you have thousands and thousands of switches in front of you,” Shiu said, “and you want to know which combination will create the right kind of response in the plant. Don’t let humans do it. We rely on machines to find the combinations.”

It was through this work that the scientists were able to better understand which genes were relevant in coping with extreme environments and how they are controlled.

“Our work will contribute to improving crops so they can deal with environmental changes better,” Shiu said. “More broadly, what we find is important to better understand how global climate change may impact plant growth and food production.”

Other contributors to the paper were Cheng Zou, Kelian Sun, Joshua Mackaluso, Alexander Seddon from the plant biology department; Rong Jin from computer science and engineering; and Michael Thomashow of the MSU-DOE Plant Research Laboratory.