AUSTIN, Texas — An inexpensive antifungal drug, thiabendazole, slows tumor growth and shows promise as a chemotherapy for cancer. Scientists in the College of Natural Sciences at The University of Texas at Austin made this discovery by exploiting the evolutionary relatedness of yeast, frogs, mice and humans.

Thiabendazole is an FDA-approved, generic drug taken orally that has been in clinical use for 40 years as an antifungal. It is not currently used for cancer therapy.

In trials using mice, the researchers found that thiabendazole decreased blood vessel growth in fibrosarcoma tumors by more than a half. Fibrosarcomas are cancers of the connective tissue, and they are generally heavily vascularized with blood vessels.

“This is very exciting to us, because in a way we stumbled into discovering the first human-approved vascular disrupting agent,” said Marcotte, professor of chemistry. “Our research suggests that thiabendazole could probably be used clinically in combination with other chemotherapies.” 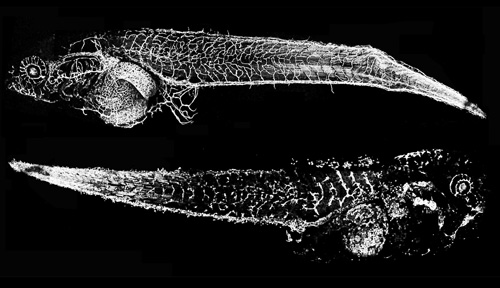 A frog tadpole with normal blood vessel development (fluorescing, top) and a frog tadpole with blood vessel development that was disrupted by the common antifungal medication, thiabendazole (bottom). New research published by Cha et. al. reveals that thiabendazole slows tumor growth and shows promise as a chemotherapy for cancer. Image credit: Hye Ji Cha, The University of Texas at Austin

The scientists’ discovery is a culmination of research that crosses disciplines and organisms.

In a previous study, Marcotte and his colleagues found genes in single-celled yeast that are shared with vertebrates by virtue of their shared evolutionary history. In yeasts, which have no blood vessels, the genes are responsible for responding to various stresses to the cells. In vertebrates, the genes have been repurposed to regulate vein and artery growth, or angiogenesis.

“We reasoned that by analyzing this particular set of genes, we might be able to identify drugs that target the yeast pathway that also act as angiogenesis inhibitors suitable for chemotherapy,” said Marcotte.

Turns out they were right.

Cha, a graduate student in cell and molecular biology at the university, searched for a molecule that would inhibit the action of those yeast genes. She found that thiabendazole did the trick.

She then tested the drug in developing frog embryos. These are fast growing vertebrates in which scientists can watch blood vessel growth in living animals.

Cha found that frog embryos grown in water with the drug either didn’t grow blood vessels or grew blood vessels that were then dissolved away by the drug. Interestingly, when the drug was removed, the embryos’ blood vessels grew back.

“We didn’t set out to find a vascular disrupting agent, but that’s where we ended up,” said Wallingford, associate professor of developmental biology and Cha’s graduate advisor with Marcotte. “This is an exciting example of the power of curiosity-driven research and the insights that can come from blending disciplines in biology.”

About the video: Watch a video of blood vessel development in tadpoles with and without the common antifungal drug thiabendazole showing how the drug is a “vascular disrupting agent.”

The scientists’ goal is now to move the drug into clinical trials with humans. They are talking with clinical oncologists about next steps.

“We hope the clinical trials will be easier because it is already approved by the FDA for human use,” said Marcotte.

Funding for this research came from the Cancer Prevention Research Institute of Texas (CPRIT), the Welch Foundation, the National Institutes of Health (grants GM067779 and GM088624) and the Howard Hughes Medical Institute (HHMI). Marcotte is the Mr. and Mrs. Corbin J. Robertson, Sr. Regents Chair in Molecular Biology. Wallingford is an HHMI Early Career Scientist.