A new species of carnivorous dinosaur – one of the three largest ever discovered in North America – lived alongside and competed with small-bodied tyrannosaurs 98 million years ago. This newly discovered species, Siats meekerorum, (pronounced see-atch) was the apex predator of its time, and kept tyrannosaurs from assuming top predator roles for millions of years.

“It’s been 63 years since a predator of this size has been named from North America,” says Lindsay Zanno, a North Carolina State University paleontologist with a joint appointment at the North Carolina Museum of Natural Sciences, and lead author of a Nature Communications paper describing the find. “You can’t imagine how thrilled we were to see the bones of this behemoth poking out of the hillside.” 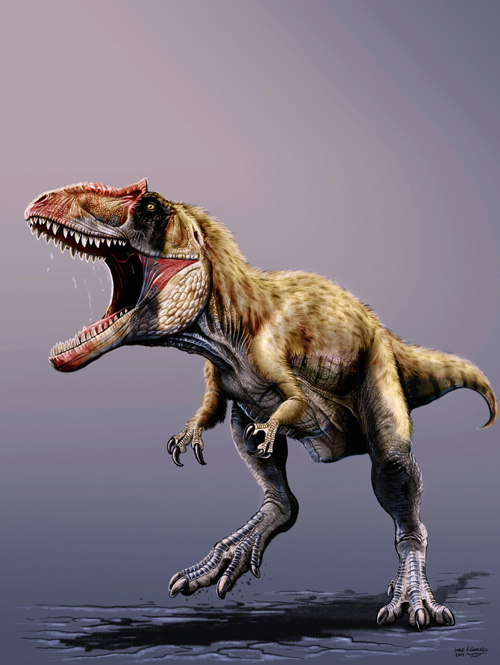 Zanno and colleague Peter Makovicky, from Chicago’s Field Museum of Natural History, discovered the partial skeleton of the new predator in Utah’s Cedar Mountain Formation in 2008. The species name acknowledges the Meeker family for its support of early career paleontologists at the Field Museum, including Zanno.

The recovered specimen belonged to an individual that would have been more than 30 feet long and weighed at least four tons. Despite its giant size, these bones are from a juvenile. Zanno and Makovicky theorize that an adult Siats might have reached the size of Acrocanthosaurus, meaning the two species vie for the second largest predator ever discovered in North America. Tyrannosaurus rex, which holds first place, came along 30 million years later and weighed in at more than twice that amount.

Siats terrorized what is now Utah during the Late Cretaceous period (100 million years ago to 66 million years ago). It was previously unknown who the top meat-eater was in North America during this period. “Carcharodontosaurs reigned for much longer in North America than we expected,” says Zanno. In fact, Siats fills a gap of more than 30 million years in the fossil record, during which time the top predator role changed hands from carcharodontosaurs in the Early Cretaceous to tyrannosaurs in the Late Cretaceous.

The lack of fossils left paleontologists unsure about when this change happened and if tyrannosaurs outcompeted carcharodontosaurs, or were simply able to assume apex predator roles following carcharodontosaur extinction. It is now clear that Siats’ large size would have prevented smaller tyrannosaurs from taking their place atop the food chain.

At the time Siats reigned, the landscape was lush, with abundant vegetation and water supporting a variety of plant-eating dinosaurs, turtles, crocodiles, and giant lungfish. Other predators inhabited this ecosystem, including early tyrannosaurs and several species of other feathered dinosaurs that have yet to be described by the team. “We have made more exciting discoveries including two new species of dinosaur,” Makovicky says.

“Stay tuned,” adds Zanno. “There are a lot more cool critters where Siats came from.”