EAST LANSING, Mich. — A team of Michigan State University researchers will soon be heading into the rainforests of Nicaragua to help an endangered species known as a Baird’s tapir co-exist with local farmers whose crops are being threatened by the animals.

The animals were thought to be extinct in that part of the world until just two years ago when the MSU team discovered them still living there through the use of “camera trapping” – the setting up of still and video cameras in order to “capture” the animal.

Now a battle is under way between the Baird’s tapir, one of four species of the elephant look-alike animals, and local farmers who say they are eating their crops.

The MSU team, led by Lyman Briggs College assistant professor Gerald Urquhart, will attempt to capture a number of the animals and place a GPS collar on them to monitor their movements.

“We’d like to figure out how and where they live and if they can co-exist with the agricultural community,” Urquhart said. “We hope the results of this project are that the tapirs can persist in the landscape and can be tolerated by the humans in that area.

“The farmers may have to recognize that there might be some crop losses, but nothing too substantial.” 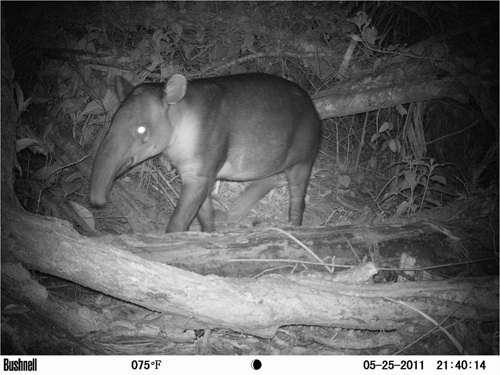 A Baird's tapir caught on camera in the rainforest of Nicaragua by an MSU team of researchers. The scientists are studying ways in which the endangered animal and local farmers can co-exist. Image credit: Michigan State University

Despite being related to elephants, Baird’s tapirs are known to the local population as the “cow of the rainforest.” Weighing in at about 600 pounds, the animal plays a major role in seed dispersal – eating fruits and spreading seeds throughout the region.

The work is being funded in part by a $25,000 grant from the Disney Worldwide Conservation Fund.

“The funding,” Urquhart said, “will help cover the cost of trapping and collaring the animals, along with local conservation and education efforts.”

He said the camera-trapping work also has helped the local economy as the team has hired local people to help with the project.

“Hopefully through this work they’ve recognized the value of wildlife for purposes other than for food,” Urquhart said. 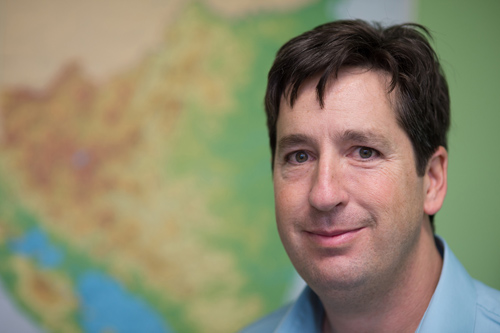 Gerald Urquhart, an assistant professor in MSU's Lyman Briggs College, is working in Nicaragua to save the Baird's tapir. Urquhart and his team will use GPS collars to track the movements of the animal, which is on the endangered species list. Photo by G.L. Kohuth.

It’s estimated that about 4,500 Baird’s tapirs still exist in the world today, most of which live in Central and South America. Their numbers have been declining steadily due to human encroachment into their environment.

All four species of tapirs are either endangered or threatened.

Much of the research work also is funded by a grant from the National Science Foundation.