Closing ranks on an invader

Years ago the city of Grand Rapids, Michigan, changed its policy on dealing with the emerald ash borer (EAB), a pretty but deadly insect that has killed many of the state’s ash trees.

Instead of cutting down all ash trees, they allowed residents to treat high-value trees with insecticides at their own expense, says Kathy Quick, an assistant professor in the University of Minnesota’s Humphrey School of Public Affairs who was working in Grand Rapids at the time.

Later, after Quick had joined the U, she spoke about these events to an entomology class.

“The students were appalled,” she recalls. “They felt it was inevitable that the ash borer would destroy virtually all urban ash trees, and it would be best to accept that and act accordingly.” But she soon discovered that even those who agree with that grim scenario don’t necessarily agree on what to do about it.

The opinion divide defines a classic public policy problem: deciding how to address an issue, who should do it, how much to spend, and so on.

Quick and a Humphrey colleague, Jennifer Kuzma, tackled it locally by bringing a range of concerned parties together to figure out strategies, starting with focus groups to survey the landscape of perceptions, potential responses, and gaps in understanding about the EAB. 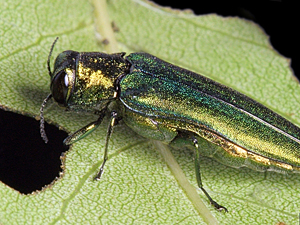 This image by David Cappaert of Michigan State University shows the shimmering colors of the emerald ash borer.

Out of many, one

• Experts: people from entomology, research, forestry, cities coping with the EAB, the Minnesota Department of Agriculture (MDA), and the U’s Minnesota Landscape Arboretum

• People interested in, but not focused on, the EAB: tree care professionals, master gardeners, neighborhood and environmental groups

• Members of the general public

After gathering and analyzing input from the groups, Quick and Kuzma shared the data with the groups at a roundtable and sought a way to join forces against the insect.

Conflict arose over the MDA’s use of imported, EAB-killing wasps. 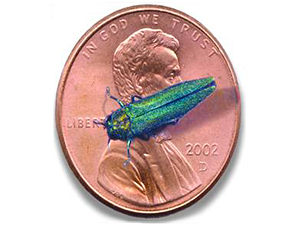 Though destructive, emerald ash borers are tiny, as shown in this image by Howard Russell of Michigan State University.

“Scientists said, ‘We’ve tested this and we have high confidence about its safety, but not how effective it will be,'” Quick recalls. “The general public and interest groups said, ‘That’s a freaky proposition, releasing one nonnative species to deal with another one. But we believe it could work, and we’re desperate for a solution, so we’ll go with it.'”

The roundtable converged on several messages to state agencies:

• Be assertive about solutions. Emphasize to the public that they must not move firewood to a new area.

• Scientists and public agencies must quash any notion that the wasps, or anything else, is a magic bullet and everyone must be responsible for their behavior

• Public agencies like the MDA, DNR, U.S. Forest Service, and U of M Extension should enlist more volunteers, arborists, and other underutilized parties, especially master gardeners.

Bottom line: The state must adopt an integrated, consistent plan of action and communicate it clearly.to all parties, especially the public.

A ripple becomes a swell

The Minnesota Forest Resources Council invited Quick to present her and Kuzma’s research findings and the roundtable recommendations. The council, comprising private landowners, tribes, the DNR, Superior/Chippewa National Forest, the forest industry, and others, advises the governor and Legislature on sustainable forestry policies.

Council Executive Director David Zumeta says the focus group and the roundtable were valuable because they brought together two groups that don’t always talk to each other: urban and community forestry interests with folks from the broader forest resources community statewide.

“It was a unique opportunity to talk about the ash borer impacts from the streets of the Twin Cities to the BWCA wilderness,” says Zumeta. “This is important because urban areas are a breeding ground for spread to rural forests.”

Impressed by the U gatherings, Shawn Bernick, vice president of Rainbow Treecare Scientific Advancements, convened a roundtable with, among others, experts from other states with more pervasive EAB infestations. Because mature trees are so ecologically valuable and replacing them is so expensive, they focused on tree preservation. For example, treating just some city trees with insecticides could limit the damage—and expenses—in any one season.

All native ash trees will eventually succumb, Bernick says, but Asian ash trees may have some resistance. Planting other trees next to ashes to shorten the replacement interval is another approach.

“Our objective is to make sure that regarding EAB, the Twin Cities area is the most prepared and educated metro area,” Bernick says.

“It’s quite unusual for social scientists to do this kind of research, focusing on an insect problem,” he says. “I think we need to figure out ways to have more scientists do this.”