Any multicellular animal, from a blue whale to a human being, poses a special challenge for evolution.

Most of the cells in its body will die without reproducing; only a privileged few will pass their genes to the next generation.

How could the extreme degree of cooperation required by multicellular existence actually evolve? Why aren’t all creatures unicellular individualists determined to pass on their own genes?

Joan Strassmann and David Queller, evolutionary biologists at Washington University in St. Louis, provide an answer in this week’s issue of the journal Science.

Experiments with amoebae that usually live as individuals, but must also join with others to form multicellular bodies to complete their life cycles, show that cooperation depends on kinship. 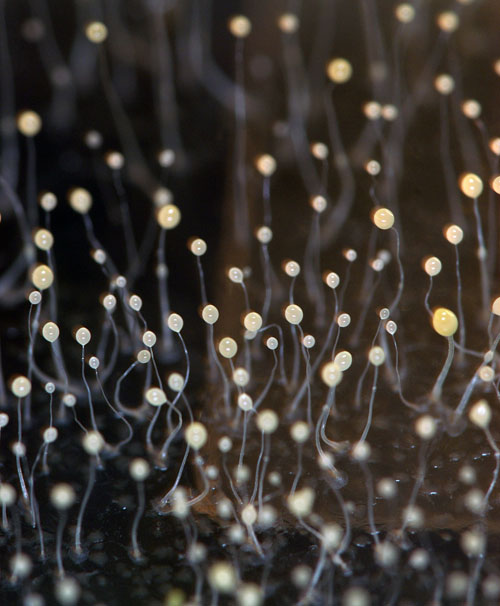 The social amoeba Dictyostelium discoideum is the subject of a new study of evolution. Image credit: Owen Gilbert

If amoebae occur in well-mixed cosmopolitan groups, cheaters will always be able to thrive by free-loading on their cooperative neighbors.

But if groups derive from a single cell, cheaters will usually occur in all-cheater groups and will have no cooperators to exploit.

The only exceptions are brand new cheater mutants in all-cooperator groups, and these could pose a problem if the mutation rate is high enough and there are many cells in the group to mutate.

The scientists calculated just how many times amoebae that arose from a single cell can safely divide before cooperation degenerates into a free-for-all.

The answer turns out to be 100 generations or more. 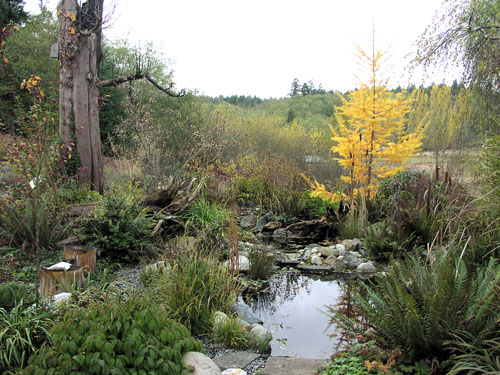 Rotting logs on the forest floor are among Dicty's favorite habitats. Image credit: State of Washington

Population bottlenecks that kill off diversity and restart the population from a single cell are powerful stabilizers of cellular cooperation, the scientists conclude.

“The leap from single-celled organisms to multicelled ones was a critical step in the history of life that paved the way for the world’s plants and animals, including humans,” says Sam Scheiner, program director in the National Science Foundation’s (NSF) Division of Environmental Biology, which funded the research. “This study provides important clues that about the conditions necessary for that leap.”

Queller and Strassmann moved to Washington University from Rice University this summer, bringing a truckload of frozen spores with them.

Although they had worked for years with wasps and stingless bees, Queller and Strassmann’s current “lab rat” is the social amoeba Dictyostelium discoideum, known as Dicty for short. 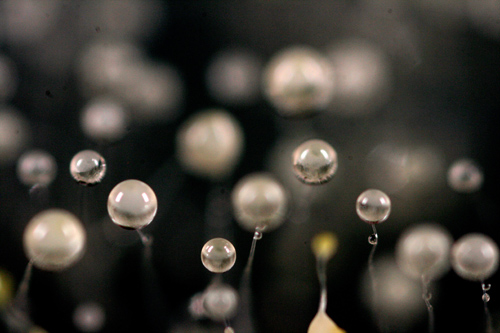 The social amoebae, better known as “slime mold,” can be found almost everywhere: in Antarctica, in deserts, in the canopies of tropical forests and in Forest Park, the urban park that adjoins Washington University.

The amoebae spend most of their lives as tiny blobs crawling through soil looking for E. coli and other bacteria to eat.

Things become interesting when bacteria are scarce and the amoebae begin to starve. Then they release chemicals that attract other amoebae, which follow this trail until they bump into one another.

A mound of some 10,000 amoebae forms and elongates into a slug a few millimeters long that crawls forward, but not backward, toward heat and light.

The slug stops moving when it has reached a suitable place for dispersal. Then the front 20 percent of the amoebae die to produce a stalk that the remaining cells flow up to become spores.

The 20 percent of the amoebae in the stalk sacrifice their genes so the other 80 percent can pass theirs on.

When Strassmann and Queller began to work with Dicty, one of the first things they discovered was that the amoebae sometimes cheat.

Scientist Dennis Welker of Utah State University had given them a genetically diverse collection of wild-caught clones–genetically identical amoebae.

They mixed amoebae from two clones together, then examined the fruiting bodies to see where the clones ended up.

Each fruiting body included cells from both clones, but some clones contributed disproportionately to the spore body. They had cheated.

How can a blob of cytoplasm cheat?  In more ways than you’d think.

“They might,” says Queller, “have a mutation that makes an adhesion molecule less sticky, for example, so that they slide to the back of the slug, the part that forms spores.”

“But there are tradeoffs,” says Strassmann, “because if you’re too slippery, you’ll fall off the slug and lose all the advantages of being part of group.”

Strassmann and Queller wondered if it would be possible to break the social contract among the amoebae by setting up conditions where relatedness was low, and each clonal lineage encountered mostly strangers and rarely relatives.

Together with then graduate student Jennie Kuzdzal-Fick, they set up an experiment to learn what happened to cheating as heterogeneous (low relatedness) populations of amoebae evolved.

“At the end of the experiment we assessed the cheating ability of the descendants by mixing equal numbers of descendants and ancestors, and checking to see whether the descendants ended up in the stalks or the spores of the fruiting bodies,” says Strassmann.

They found that in nearly all cases the descendants cheated their ancestors. What’s more, when descendant amoebae were grown as individual clones, about a third were unable to form fruiting bodies.

Many of the mutants, in other words, were “obligate” cheaters.  Having lost the ability to form their own fruiting bodies, they were able to survive only by free-loading, or taking advantage of the amoebae that had retained the ability to cooperate.

This result, Queller and Strassmann say, shows that cheater mutations that threaten multicellularity occur naturally and are even favored–as long as the population of amoebae remains genetically diverse.

But the scientists were aware that obligate cheaters are either very rare or altogether missing among wild social amoebae. They had not found any obligate cheaters in the more than 2,000 wild clones they sampled.

They also knew that in the wild, the amoebae in fruiting bodies are close kin if not clones.

What prevents cooperation in wild populations from degenerating into the laboratory free-for-all?

Could the difference be that the amoebae in the laboratory were distant relations and those in the wild are kissing kin?

Suppose, the scientists thought, one amoeba ventured alone into a pristine field of bacteria.

As it grew and multiplied, making copies of itself, how long would it take for cheating mutations to appear or what was the mutation rate? Additionally, how successfully would these mutations proliferate–how strongly would they be selected?

In this experiment, amoebae that mutated didn’t have to compete against amoebae that were faithful replicators.

In the absence of selection, all but the most severe mutations were also reproduced and became a permanent part of the lineage’s genome.

The scientists allowed 90 different lines of amoebae to accumulate mutations in this way.

“At the end,” says Queller, “we found that among those 90 lines not a single one had lost the ability to fruit. So that’s almost 100 lines, almost a thousand generations and 100,000 opportunities, to lose fruiting and none of them did.

“That allowed us, using statistics, to put an upper limit on the rate at which mutations turn a cooperator into an obligate cheater.”

The rate was low enough that if fruiting bodies were forming in the wild from amoebae that were all descended from one spore, cheating would never be an issue.

But the scientists wanted to ask another, bigger question.

They used calculations invented for population genetics to ask how many times the amoeba could divide–theoretically–before cheating became a problem.

What if, they asked, “we let an initial single amoebae divide enough times so there would be as many of them as there are cells in a fruit fly, then transferred one amoeba and allowed it to divide until the daughter colony reached fruit fly size, and so on?

“What if we let the colonies grow to human size?  To elephant size? To blue whale size?  Would the cheaters bring down the whale-sized Dicty colony?”

The answer, it turned out, was no.

A whale-sized Dicty colony is not the same thing as a whale, but nonetheless the experiments suggest how organisms, over the course of evolution, have sidestepped the cheating trap and maintained the levels of cooperation multicellular bodies demand.

“It’s the single-cell bottleneck,”he says, “that generates the high relatedness among the cells that allows them to cooperate.”