A Playbook for Fitness

Even if you’re not a football fan, you’ve probably noticed the Minnesota Vikings in the news a lot, whether it’s in regard to the 2011 season or their push for a new stadium.

What often goes unnoticed is the team’s record of community engagement and financial benevolence. Over the years the Vikings have given millions to the local community. 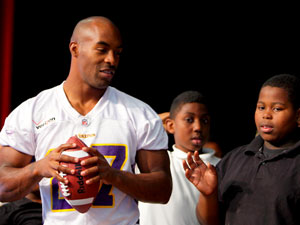 Even more under the radar is the team’s long partnership with the University of Minnesota. For 30 years, the Vikings Children’s Fund has supported the Department of Pediatrics and the Amplatz Children’s Hospital to the tune of nearly $6 million, much of that for research-related seed grants and most recently by adopting the Minnesota Vikings room at the new hospital.

One current program, called the Vikings Fitness Playbook, is a three-year effort to combat the epidemic of childhood obesity.

The Vikings Fitness Playbook program is designed to improve the lives of children through education about healthy eating choices and fitness.

Toward that end, an outreach arm of the program is built around a simple two-page “playbook,” with both offensive plays (geared around physical activity) and defensive plays (centered on healthy eating). Some examples of the defensive plays:

• “Tackle your thirst. Choose water instead of juice or soda.”
• “Pass the fruits and vegetables. Fill one-half of your plate with power foods.”

“People respond best to simple, concrete goals when it comes to improving their lifestyle,” says Aaron Kelly, assistant professor in the Department of Pediatrics and principal investigator for the project.

He notes that the program is aimed as much at parents of obese children as the children themselves.

“If parents don’t model healthy habits, it’s not going to trickle down to their kids,” he says. “The parents are really the key to this.”

The outreach component included visits to two schools—one in Minneapolis and one in St. Paul—by Vikings running back Lorenzo Booker, cheerleaders, and Viktor the Viking. In addition, playbooks were distributed at the Minnesota State Fair and at the Vikings’ game against Denver on December 4 (along with 10,000 pedometers).

The second component of the program is research based as well as educational.  It involves a cohort group of 10 families coming to the University each Tuesday for 10 weeks to meet with a dietitian and with a physical activity leader, or PAL. The PALs are kinesiology students from the U who work individually with a child and his or her parents.

One week this fall included a swimming session with Vikings players at the U’s Cooke Hall pool. Swimming and walking are ideal activities, Kelly says, because children can engage in them either individually or with their family.

The kinesiology students benefit, as well. They’re offered a two-week short course in pediatric medicine—with a focus on obesity—and then get to apply their knowledge in the community.

Carrying the football analogy a step further, the Vikings Fitness Playbook program is bringing press coverage—if not an all-out blitz—to the epidemic of childhood obesity.

“It’s a really good partnership between the University—our department—and the Vikings,” Kelly says. “They’re very interested in giving back to the community, and it makes sense to do that in the context of the NFL’s Play60 goals of physical fitness and being healthy. They are a football team, after all.”