A new study combining the latest archaeological evidence with state-of-the-art geoscience technologies provides evidence that climate change was a key ingredient in the collapse of the great Indus or Harappan Civilization almost 4000 years ago. The study also resolves a long-standing debate over the source and fate of the Sarasvati, the sacred river of Hindu mythology.

Once extending more than 1 million square kilometers across the plains of the Indus River from the Arabian Sea to the Ganges, over what is now Pakistan, northwest India and eastern Afghanistan, the Indus civilization was the largest—but least known—of the first great urban cultures that also included Egypt and Mesopotamia. Like their contemporaries, the Harappans, named for one of their largest cities, lived next to rivers owing their livelihoods to the fertility of annually watered lands. 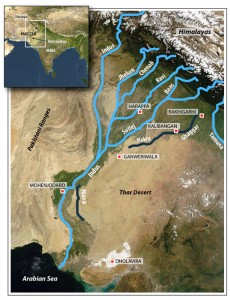 Once extending more than 1 million square kilometers across the plains of the Indus River from the Arabian Sea to the Himalayas and the Ganges, over what is now Pakistan, northwest India and eastern Afghanistan, the Indus civilization was the largest—but least known—of the first great urban cultures that also included Egypt and Mesopotamia. Named for one of their largest cities, the Harappans relied on river floods to fuel their agricultural surpluses. Today, numerous remains of the Harappan settlements are located in a vast desert region far from any flowing river. (Image credits: Liviu Giosan, Woods Hole Oceanographic Institution; Stefan Constantinescu, University of Bucharest; James P.M. Syvitski, University of Colorado.)

“We reconstructed the dynamic landscape of the plain where the Indus civilization developed 5200 years ago, built its cities, and slowly disintegrated between 3900 and 3000 years ago,” said Liviu Giosan, a geologist with Woods Hole Oceanographic Institution (WHOI) and lead author of the study published the week of May 28 in the Proceedings of the National Academy of Science. “Until now, speculations abounded about the links between this mysterious ancient culture and its life-giving mighty rivers.”

Today, numerous remains of the Harappan settlements are located in a vast desert region far from any flowing river. In contrast to Egypt and Mesopotamia, which have long been part of the Western classical canon, this amazingly complex culture in South Asia with a population that at its peak may have reached 10 percent of the world’s inhabitants, was completely forgotten until 1920’s. Since then, a flurry of archaeological research in Pakistan and India has uncovered a sophisticated urban culture with myriad internal trade routes and well-established sea links with Mesopotamia, standards for building construction, sanitation systems, arts and crafts, and a yet-to-be deciphered writing system.

“We considered that it is high time for a team of interdisciplinary scientists to contribute to the debate about the enigmatic fate of these people,” added Giosan.

The research was conducted between 2003 and 2008 in Pakistan, from the coast of the Arabian Sea into the fertile irrigated valleys of Punjab and the northern Thar Desert. The international team included scientists from the U.S., U.K., Pakistan, India, and Romania with specialties in geology, geomorphology, archaeology, and mathematics. By combining satellite photos and topographic data collected by the Shuttle Radar Topography Mission (SRTM), the researchers prepared and analyzed digital maps of landforms constructed by the Indus and neighboring rivers, which were then probed in the field by drilling, coring, and even manually-dug trenches. Collected samples were used to determine the sediments’ origins, whether brought in and shaped by rivers or wind, and their age, in order to develop a chronology of landscape changes.

“Once we had this new information on the geological history, we could re-examine what we know about settlements, what crops people were planting and when, and how both agriculture and settlement patterns changed,” said co-author Dorian Fuller, an archaeologist with University College London. “This brought new insights into the process of eastward population shift, the change towards many more small farming communities, and the decline of cities during late Harappan times.”

The new study suggests that the decline in monsoon rains led to weakened river dynamics, and played a critical role both in the development and the collapse of the Harappan culture, which relied on river floods to fuel their agricultural surpluses. 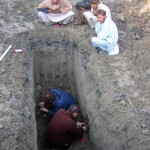 The research was conducted between 2003 and 2008 in Pakistan, from the coast of the Arabian Sea into the fertile irrigated valleys of Punjab and the northern Thar Desert. In the field, the researchers probed the landforms constructed by the Indus and neighboring rivers by drilling, coring, and even manually digging trenches (shown here). Collected samples were used to determine sediment origin, whether brought in and shaped by rivers or wind, and sediment age, in order to develop a chronology of landscape changes. (Image credit: Peter D. Clift, School of Geosciences, University of Aberdeen, UK)

From the new research, a compelling picture of 10,000 years of changing landscapes emerges. Before the plain was massively settled, the wild and forceful Indus and its tributaries flowing from the Himalaya cut valleys into their own deposits and left high “interfluvial” stretches of land between them. In the east, reliable monsoon rains sustained perennial rivers that crisscrossed the desert leaving behind their sedimentary deposits across a broad region.

Among the most striking features the researchers identified is a mounded plain, 10 to 20 meters high, over 100 kilometers wide, and running almost 1000 kilometers along the Indus, they call the “Indus mega-ridge,” built by the river as it purged itself of sediment along its lower course.

“At this scale, nothing similar has ever been described in the geomorphological literature,” said Giosan. “The mega-ridge is a surprising indicator of the stability of Indus plain landscape over the last four millennia. Remains of Harappan settlements still lie at the surface of the ridge, rather than being buried underground.”

Mapped on top of the vast Indo-Gangetic Plain, the archaeological and geological data shows instead that settlements bloomed along the Indus from the coast to the hills fronting the Himalayas, as weakened monsoons and reduced run-off from the mountains tamed the wild Indus and its Himalayan tributaries enough to enable agriculture along their banks.

“The Harappans were an enterprising people taking advantage of a window of opportunity – a kind of “Goldilocks civilization,” said Giosan. “As monsoon drying subdued devastating floods, the land nearby the rivers – still fed with water and rich silt – was just right for agriculture. This lasted for almost 2,000 years, but continued aridification closed this favorable window in the end.”

In another major finding, the researchers believe they have settled a long controversy about the fate of a mythical river, the Sarasvati. The Vedas, ancient Indian scriptures composed in Sanskrit over 3000 years ago, describe the region west of the Ganges as “the land of seven rivers.” Easily recognizable are the Indus and its current tributaries, but the Sarasvati, portrayed as “surpassing in majesty and might all other waters” and “pure in her course from mountains to the ocean,” was lost. Based on scriptural descriptions, it was believed that the Sarasvati was fed by perennial glaciers in the Himalayas. Today, the Ghaggar, an intermittent river that flows only during strong monsoons and dissipates into the desert along the dried course of Hakra valley, is thought to best approximate the location of the mythic Sarasvati, but its Himalayan origin and whether it was active during Vedic times remain controversial. 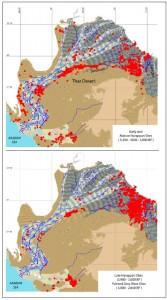 Weakened monsoons and reduced run-off from the mountains tamed the wild Indus and its Himalayan tributaries enough to enable agriculture along their valleys. During the early and mature phases of the Harappan civilization, settlements bloomed along the Indus from the coast to the hills fronting the Himalayas and along the most likely course of the mythical River Sarasvati, in what is now a waterless region, part of the Thar Desert. With continued aridification, the population moved eastward toward the Ganges basin, where monsoon rains remained reliable, marking a shift toward small farming communities and the decline of cities during late Harappan times. (Image credits: Liviu Giosan, Woods Hole Oceanographic Institution; Stefan Constantinescu, University of Bucharest; James P.M. Syvitski, University of Colorado.)

Archaeological evidence supports the Ghaggar-Hakra as the location of intensive settlement during Harappan times. The new geological evidence—sediments, topography— shows that rivers were indeed sizable and highly active in this region, but most likely due to strong monsoons. However, there is no evidence of wide incised valleys like along the Indus and its tributaries and researchers did not find any cut-through, incised connections to either of the two nearby Himalayan-fed rivers of Sutlej and Yamuna. The new study argues that these crucial differences prove that the Sarasvati (Ghaggar-Hakra) was not Himalayan-fed, but a perennial monsoon-supported watercourse, and that aridification reduced it to short seasonal flows.

By 3900 years ago, their rivers drying, the Harappans had an escape route to the east toward the Ganges basin, where monsoon rains remained reliable.

“We can envision that this eastern shift involved a change to more localized forms of economy: smaller communities supported by local rain-fed farming and dwindling streams,” said Fuller. “This may have produced smaller surpluses, and would not have supported large cities, but would have been reliable.”

Such a system was not favorable for the Indus civilization, which had been built on bumper crop surpluses along the Indus and the Ghaggar-Hakra rivers in the earlier wetter era. This dispersal of population meant that there was no longer a concentration of workforce to support urbanism. “Thus cities collapsed, but smaller agricultural communities were sustainable and flourished. Many of the urban arts, such as writing, faded away, but agriculture continued and actually diversified,” said Fuller.

“An amazing amount of archaeological work has been accumulating over the last decades, but it’s never been linked properly to the evolution of the fluvial landscape. We now see landscape dynamics as the crucial link between climate change and people,” said Giosan. “Today the Indus system feeds the largest irrigation scheme in the world, immobilizing the river in channels and behind dams. If the monsoon were to increase in a warming world, as some predict, catastrophic floods such as the humanitarian disaster of 2010, would turn the current irrigation system, designed for a tamer river, obsolete.”

This work was funded by the National Science Foundation, the Leverhulme Trust, Woods Hole Oceanographic Institution, the University of Aberdeen, and Louisiana State University.