Climate change alters the rules of sperm competition in the sea

The impact of climate change on global seawater conditions could change the rules of sperm competition for many important marine species, a pioneering new study has shown.

Researchers from the University of Exeter have shown that increasing ocean acidification, brought about by manmade carbon emissions, reduces sperm performance in a species of sea urchin, slowing down sperm in future ocean conditions. Interestingly, they found that different males were affected to different extents and that this could change the outcome when rival male ejaculates competed to fertilise a batch of eggs in the sea. 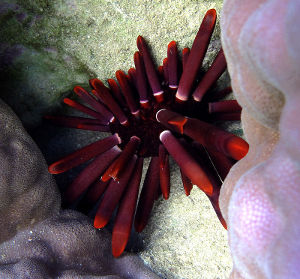 The oceans absorb about one third of the carbon dioxide produced through human activities, and this is changing the seawater chemistry. The acidity of seawater has increased by approximately 25 per cent since the industrial revolution with further change projected over the coming century unless emissions are dramatically cut.

The Exeter research team measured sperm performance in current and simulated future (ocean acidification) conditions using the same techniques employed by infertility clinics to look at how healthy human sperm are. They also ran competitive fertilisation trials where males were paired up to compete to fertilise a batch of eggs in each seawater condition with the paternity of offspring analysed to identify ‘winning’ males.

Dr Ceri Lewis, a Marine Biology expert from the College of Life and Environmental Sciences at the University of Exeter said: “The majority of marine species including sea urchins reproduce by releasing their sperm and eggs directly into the seawater. Reproduction is often the most sensitive life stage to environmental stress, so it is really important to understand how these changes in ocean chemistry will affect this essential process. Understanding the traits that determine the winners and losers in future conditions helps us unravel the impacts of change for populations of these important species.”

Anna Campbell, a PhD student at the University of Exeter and lead author of the paper said: “We know that males rarely gain sole access to a batch of eggs in the sea, and most fertilisation takes place under competition from rival male ejaculates so it’s important for a male to produce a highly competitive ejaculate. We set out to establish how the projected changes in seawater chemistry will affect the competitive quality of a male’s ejaculate to assess how the share of paternity might change in future oceans.”

Professor David Hosken, an evolutionary biology expert from the University of Exeter, said: “The results of the study indicate the fundamental impact climate change could have on reproduction in the sea.”