COLUMBIA, Mo. – Bad mortgage loans and rampant consumer debt were two of the primary causes for the recent economic recession in the U.S. Despite a national trend of debt problems, a University of Missouri researcher has found one American population that holds almost no consumer debt outside of typical home mortgages. Rui Yao, an assistant professor of personal financial planning in the College of Human Environmental Sciences at the University of Missouri, found that while 72 percent of Chinese-American households hold a mortgage, only five percent of those households have outstanding auto loans, and only three percent have any other type of consumer debt. 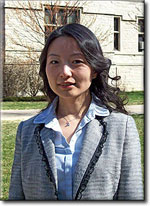 “This result may reflect some unique aspects of the Chinese culture,” Yao said. “Credit and debt are relatively new concepts to the Chinese. Having ties to a country where most purchases are made with cash, debt may not be an acceptable option for low- income households that are aware that debt needs to be repaid with interest in the future. It may also be that high levels of debt for those with relatively higher income reflect relatively higher mortgage balances.”

Yao says that while the Chinese-American population is the largest Asian-American group in the U.S., many have little experience in the American economy. She believes Chinese Americans could benefit from financial education designed to help them plan for their financial future in a manner consistent with Chinese cultural values. Yao believes encouraging Chinese Americans to take advantage of debt in a responsible fashion is important for the entire U.S. economy.

“The historic aversion of the Chinese to debt could be both a strength and a weakness in the U.S. economy,” Yao said. “It is a strength because it enables them to build a strong financial base that is not threatened by excessive amounts of consumer debt or subject to loss in uncertain financial times. However, it may be a weakness if it limits consumption. Appropriate use of debt can help households improve their quality of life as well as spur economic growth through an increase in market purchases. At the same time, excessive debt can become a financial burden to households and lenders, as proven by the recent sub-prime lending crisis.”