The number of people living in China’s cities, which last year for the first time surpassed 50 percent of the national population, is considered a boon for the consumer goods market. That is based on the assumption that there will be more families with more disposable income when poor farmers from China’s countryside move to cities and become middle-class industrial and office workers.

But the assumption overlooks a policy from the era of Chinese leader Mao Zedong that restricts the upward mobility of its rural citizens, says a University of Washington geographer.

This calls into question China’s strength in the global market and its ability to overtake the United States as a global superpower, according to Kam Wing Chan, a UW professor of geography.

His findings are published in the current issue of the journal Eurasian Geography and Economics. 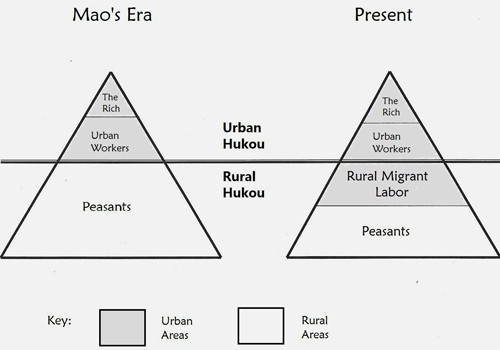 Studying China’s population statistics, Chan found that unlike many Western countries, where urbanization has generally progressed hand-in-hand with growth of middle-class urban dwellers, China’s increasing number of urbanites is largely due to higher concentrations of impoverished laborers who move from the countryside to cities for employment. These laborers usually end up in low-paid factory and service jobs. With little disposable income, they have limited prospects of moving up to the middle class.

The workers who move from the countryside to cities are also confined by a residency system, established in 1958, that created a two-tier, rural-urban divide that remains largely unchanged today, Chan said.

The system, called “hukou,” designated an urban class eligible for social welfare and a second-rank rural, peasant class, ineligible for basic social benefits largely found in the city. Forbidden to go to cities during Mao’s era, rural hukou holders were restricted to the countryside to grow food for urban workers.

Now rural workers can move to cities to work, but they cannot claim urban social benefits, including unemployment and retirement benefits, Chan said. Many employment and education opportunities are off limits to them and their family. Since hukou status is hereditary, children of rural hukou holders living in cities are not supposed to go to urban public schools. In a limited number of cities in which they are permitted in public schools, they have to pay much higher tuition fees.

Analyzing population statistics from China’s National Bureau of Statistics and the Ministry of Public Security, Chan found that about 460 million people had urban hukou status in 2010, while the entire population of Chinese city-dwellers was 666 million. The difference – 206 million, or about two-thirds of the total U.S. population – is made up mostly of rural migrants, people with rural hukou status but who live and work in cities.

This is what “supplies China with a huge, almost inexhaustible, pool of super-exploitable labor,” wrote Chan.

He also found that a significant number of new additions to the urban hukou population, people who have succeeded in changing their designation, actually have only nominal urban hukou status. In other words, they received urban status but with limited or no urban benefits.

Between those lacking any urban designation and those with only nominal status, significantly more than 206 million people are living in Chinese cities without access to basic urban social benefits.

Chan said that the consequences of this social engineering under the hukou system is a greater income gap between rich and poor, and little growth of a middle class from rural hukou holders moving to cities.

“These migrant workers and their children have slim chances of improving their circumstances through education or getting higher-paid jobs under the current system,” he said.