ANN ARBOR, Mich.—Bands of chimpanzees violently kill individuals from neighboring groups in order to expand their own territory, according to a 10-year study of a chimp community in Uganda that provides the first definitive evidence for this long-suspected function of this behavior.

During a decade of study, the researchers witnessed 18 fatal attacks and found signs of three others perpetrated by members of a large community of about 150 chimps at Ngogo, Kibale National Park. Then in the summer of 2009, the Ngogo chimpanzees began to use the area where two-thirds of these events occurred, expanding their territory by 22 percent. They traveled, socialized and fed on their favorite fruits in the new region.

“When they started to move into this area, it didn’t take much time to realize that they had killed a lot of other chimpanzees there,” Mitani said. “Our observations help to resolve long-standing questions about the function of lethal intergroup aggression in chimpanzees.”

Mitani is the James N. Spuhler Collegiate Professor in the Department of Anthropology. His co-authors are David Watts, an anthropology professor at Yale University, and Sylvia Amsler, a lecturer in anthropology at the University of Arkansas at Little Rock. Amsler worked on this project as a graduate student at U-M.

Chimpanzees (along with bonobos) are humans’ closest living relatives. Anthropologists have long known that they kill their neighbors, and they suspected that they did so to seize their land.“Although some previous observations appear to support that hypothesis, until now, we have lacked clear-cut evidence,” Mitani said. 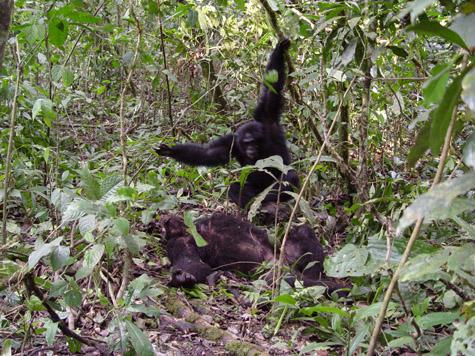 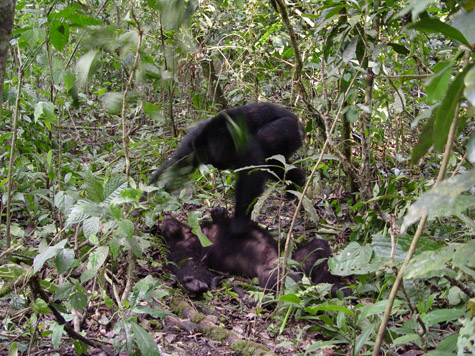 About the images above: A young adult male, who participated in the lethal attack, leaps on the dead body of the victim. Image credit: John Mitani, University of Michigan.

The bouts occurred when the primates were on routine, stealth “boundary patrols” into neighboring territory. Amsler, who conducted field work on this project described one of the attacks she witnessed far to the northwest of the Ngogo territory. She and a colleague were following 27 adult and adolescent males and one adult female.

“They had been on patrol outside of their territory for more than two hours when they surprised a small group of females from the community to the northwest,” Amsler said. “Almost immediately upon making contact, the adult males in the patrol party began attacking the unknown females, two of whom were carrying dependent infants.” 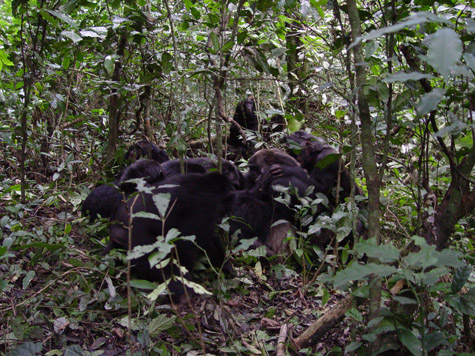 About the image above: A group of male chimpanzees attack an adult male from another community. The victim is at the bottom of the pile of attackers and hidden from view. Image credit: John Mitani, University of Michigan.

The Ngogo patrollers seized and killed one of the infants fairly quickly. They fought for 30 minutes to wrestle the other from its mother, but unsuccessfully. The Ngogo chimpanzees then rested for an hour, holding the female and her infant captive. Then they resumed their attack.

“Though they were never successful in grabbing the infant from its mother, the infant was obviously very badly injured, and we don’t believe it could have survived,” Amsler said.

In most of the attacks in this study, chimpanzee infants were killed. Mitani believes this might be because infants are easier targets than adult chimpanzees.

Scientists are still not sure if the chimpanzees’ ultimate motive is resources or mates. They haven’t ruled out the possibility that the attacks could attract new females to the Ngogo community.

Mitani says these findings disprove suggestions that the aggression is due to human intervention. Lethal attacks were first described by renowned primatologist Jane Goodall who, along with other human observers, used food to gain the chimps’ trust. Some researchers posited that feeding the animals might have affected their behavior. The Michigan researchers didn’t use food.

He cautions against drawing any connections to human warfare and suggests instead that the findings could speak to the origins of teamwork.

“Warfare in the human sense occurs for lots of different reasons,” Mitani said. “I’m just not convinced we’re talking about the same thing.“What we’ve done at the end of our paper is to turn the issue on its head by suggesting our results might provide some insight into why we as a species are so unusually cooperative. The lethal intergroup aggression that we have witnessed is cooperative in nature, insofar as it involves coalitions of males attacking others. In the process, our chimpanzees have acquired more land and resources that are then redistributed to others in the group.”

The paper is titled “Lethal intergroup aggression leads to territorial expansion in wild chimpanzees.” The research is funded by the Detroit Zoological Institute, the Little Rock Zoo, the L.S.B. Leakey Foundation, the National Geographic Society, the National Science Foundation, the University of Michigan, the Wenner-Gren Foundation for Anthropological Research, and Yale University.