A synthetic version of a rare toxin produced by a sea creature appears to hold promise for treating many different types of cancer while minimizing the harmful side effects of widely used chemotherapy drugs.

A study published in the journal Science Translational Medicine describes research on a substance called diazonamide, which prevents cell division, and was isolated from a marine animal called Diazona angulata.

Led by Patrick Harran, UCLA’s Donald J. and Jane M. Cram Professor of Organic Chemistry, researchers produced a synthetic form of diazonamide that, in rodents, appears to be effective in fighting breast cancer, colon cancer and leukemia. The compound the scientists synthesized, DZ-2384, is more potent and lasts longer in the bloodstream than natural diazonamide.

And, when combined with a chemotherapy drug called gemcitabine (which is marketed under the brand name Gemzar), the compound is effective in rodents for combating advanced pancreatic cancer.

DZ-2384 works by disrupting a molecular machine called the mitotic spindle, which the cell uses to pull replicated chromosomes apart during division. There are numerous compounds that affect spindle function, including several FDA-approved cancer drugs. These agents, which are called anti-mitotics, have a typical pattern of toxicity associated with their use. DZ-2384 is an anti-mitotic that behaves differently. 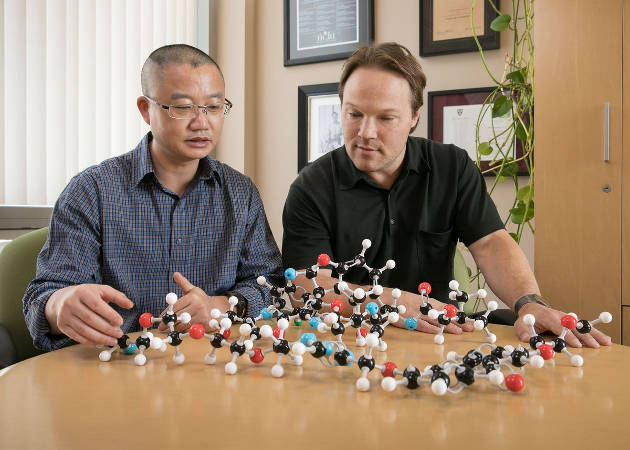 Hui Ding and Patrick Harran with a model of DZ-2384, which holds promise for treating cancer while minimizing the painful side effects associated with common chemotherapy drugs. Image credit: Reed Hutchinson/UCLA

In the study, researchers implanted or grew tumors in hundreds of rodents as models for various types of human cancer. They found that in animals receiving DZ-2384, tumors shrank as much as or more than when a conventional anti-mitotic was used, but with much less toxicity at effective doses.

Animals receiving DZ-2384 also had markedly less peripheral neuropathy — a type of debilitating nerve pain that often affects humans who take anti-mitotic drugs — than those that received docetaxel, a conventional anti-mitotic. Peripheral neuropathy is one of the chief side effects of anti-mitotic chemotherapy, and it’s often severe enough that doctors decide to stop administering chemotherapy, at least temporarily, in order to reduce patients’ pain. But that’s problematic as well, because once treatment is suspended, tumors tend to return, and often in forms that are resistant to drugs.

Harran said understanding the unique way DZ-2384 functions in animals wouldn’t have been possible without the cooperation of specialists from several fields over the past 15 years.

“One piece of the puzzle after another came into place over time,” Harran said. “Now, we have the chemistry, the biochemistry, the structural biology, the pharmacology and toxicology. We have a deep understanding of what this drug is doing.”

Harran believes the research could ultimately help large numbers of people with cancer, and he expects human clinical trials to begin within two years.

“We have good reason to expect that human clinical trials of DZ-2384 will show that, at doses effective for treating a person’s cancer, there will be much less risk of the peripheral neuropathy that can force clinicians to stop treatment,” he said.

How the study began

Harran began his work with diazonamides as a fundamental chemistry research problem. In 1991, a study by other researchers described the toxin, which they had isolated from Diazona angulata. But when Harran and his team synthesized the chemical structure described in the published report, they discovered that it was not actually diazonamide.

In 2001, Harran and colleagues published a study that corrected the chemical structure of diazonamide, and two years later they had synthesized the true structure in their lab. Next, they began studying what the molecule might be doing to block cells from dividing, and in 2007, they discovered that the synthetic diazonamides they had produced minimized undesirable toxic effects that are commonly associated with chemotherapy.

Specifically, the synthetic forms of diazonamide had an unusually large “therapeutic window” — the dosage range that would produce a desirable effect while minimizing undesirable side effects. In experiment after experiment, Harran said, the researchers found that synthetic diazonamides’ therapeutic window was at least 10 times larger than that of traditional anti-mitotic drugs.

In 2015, UCLA senior research associate Hui Ding prepared a special form of DZ-2384 that was engineered with a molecular-scale “tracking device” so scientists could monitor its activity and better understand how it worked. That helped colleagues at Montreal’s McGill University — Anne Roulston, Gordon Shore and Gary Brouhard — confirm what they had come to suspect, and what others had looked for and failed to find earlier: that the compound binds to a protein called tubulin, which is a building block of mitotic spindles and a common target of anti-mitotic drugs.

Armed with this information, researchers at Villigen, Switzerland’s Laboratory of Biomolecular Research used a technique called X-ray crystallography to determine the structure of the DZ-2384 bound to tubulin. Their work offers a possible explanation for how DZ-2384 could disrupt dynamic tubulin polymers during cell division but spare those polymers in resting cells like neurons in the peripheral nervous system. And that, Harran said, is what appears to allow the compound to attack growing cancer cells while minimizing damage to healthy cells, which can lead to the painful side effects of conventional chemotherapy.

Those who contributed to the research represent a wide range of expertise, from chemistry, biology and cancer research to neuroscience and pharmacology. Among them are Thomas Wilkie and Rolf Brekkenof UT Southwestern Medical Center in Dallas; and Michel Steinmetz of the Laboratory of Biomolecular Research.

The research was partly funded by a sponsored research agreement between UCLA and Diazon Pharmaceuticals Inc., a Montreal-based company that owns the relevant intellectual property and was co-founded by Harran in 2013.