AUSTIN, Texas — In findings of relevance to conservationists and the fishing industry, new research links short-term reductions in growth and reproduction of marine animals off the California coast to increasing variability in the strength of coastal upwelling currents — currents that supply nutrients to the region’s diverse ecosystem. 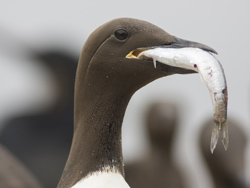 The new study, led by Bryan Black at The University of Texas at Austin’s Marine Science Institute and appearing Sept. 19 in the journal Science, shows that since 1950 the California coast has experienced winters with extremely weak upwelling more frequently than in the previous five centuries.

Winters with extremely weak upwelling are associated with slower growth in fish and lower reproductive success for seabirds, underscoring the importance of upwelling for the conservation of endangered animals and management of commercially important fisheries.

“Our study underscores the fact that California is a place of high coastal upwelling variability,” said Black, assistant professor of marine science and lead author on the study. “You have to keep that in mind if you’re managing a fishery — for example, you can’t plan for every year being moderate or reliable. There are a lot of ups and downs.”

Black said it’s not possible yet to determine whether climate change has contributed to the changes in winter upwelling variability. The strength of upwelling does seem to be related to a climate pattern called the El Niño-Southern Oscillation (ENSO). And there is evidence that ENSO has been unusually variable during the past century, which may in part explain the pattern in upwelling extremes. 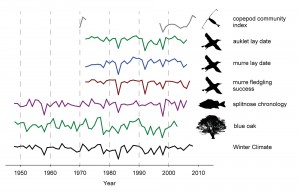 Drops in biological productivity along the California coast (represented by fish growth rates and egg laying dates and fledgling success of seabirds) correlate with weak winter upwelling (represented here by Winter Climate, a combination of three climatic conditions associated with upwelling). Because tree ring data from blue oaks correlate well with Winter Climate, they can be used as a proxy for upwelling strength going back 600 years. Image credit: University of Texas at Austin (Click image to enlarge)

“This is consistent with what we expect from climate change, but at this point, we can’t attribute it to that,” said Black. “This is something we need to continue watching to see how climate variability plays out in the coming years.

To reconstruct the past 600 years of upwelling along the California coast, the team used tree ring data from long-lived blue oak trees. The researchers demonstrated that growth patterns in blue oak trees near the coast are highly sensitive to the same climate factors associated with upwelling. During the past 600 years, four of the 10 most extremely poor upwelling years occurred since 1950, and seven of 10 have occurred since 1850.

To study the effects of changing strength of upwelling on marine life, the team integrated data on how quickly fish grew every year since the 1940s, the timing of seabird egg laying since the 1970s, and the fledgling success of seabirds since the 1970s.

When they compared the tree ring data with these various biological indicators, they found poor upwelling years correlated with drops in biological productivity. Because the birds and fish in this study tended to rebound from each of these events within a year or two, the increased variability of upwelling strength has not led to long-term declines.

“It’s interesting to see how influential climate is on biology and what a synchronizing force it is, especially across marine and terrestrial systems,” said Black.

A history (1428-2003; black line) of winter climate in the California Current ecosystem derived from blue oak tree ring data. Positive anomalies represent years with above-average upwelling and marine productivity; negative values represent years with below-average upwelling and marine productivity. Gray shading indicates uncertainty. The green line is an instrumental record of winter climate, and the yellow line is an instrumental record of winter sea level at San Francisco (SFO), which is unusually long and a strong indicator of winter climate. Red arrows indicate the 10 most extreme negative anomalies in the winter climate history, corresponding to years 1441, 1524, 1825, 1862, 1868, 1941, 1978, 1993, 1995, and 1998. Image credit: University of Texas at Austin (Click image to enlarge)

Researchers have used tree rings to reconstruct climate patterns such as ENSO before, but this is the first study to target such a focused region with such strong and direct consequences on animal growth and reproductive success.

The tree ring data allowed researchers to understand how these ecosystems were influenced by climate variation and extremes long before systematic records were kept. Few direct observations of the climate factors associated with upwelling along the west coast of North America go back more than 70 years.

Black noted that changes in upwelling strength did not affect just fish and seabirds. In a sense, these representative species were just the tips of the iceberg.

“By studying top level predators, we get an upper level view of the entire ecosystem,” said Black. “They integrate what’s happening across the whole food web.”

Black said his team will next try to project how upwelling might change in the future.

“We understand the atmospheric drivers behind winter upwelling, so now we plan to use climate models to see what they say about these drivers and whether they forecast change for those in the future,” said Black.

This research was funded by the National Science Foundation’s Biological Oceanography Program and the National Oceanic and Atmospheric Administration’s Fisheries and Environment Program.