Cementing a theory about the sea creatures of the Ediacara Biota

Earth’s earliest community of complex sea creatures lived in a warm, slimy, planetary petri dish that nurtured a broad array of exotic species. Yet we likely wouldn’t know about it at all, scientists say, if not for a quirk in the chemistry of ancient oceans.

A Yale-led research team found that the Ediacara Biota, a collection of marine fossils found in sandstone around the world, record the operation of an unusual mechanism that preserved impressions of the creatures’ soft bodies for hundreds of millions of years. The findings appear in the journal Geology.

The Ediacara Biota takes its name from a fossil deposit in South Australia, but fossils of the Ediacara Biota are found worldwide in rocks ranging in age from 541 to 580 million years old. The creatures themselves were as small as a few millimeters and as large as one meter, and lived in dense, diverse communities on the seafloor. 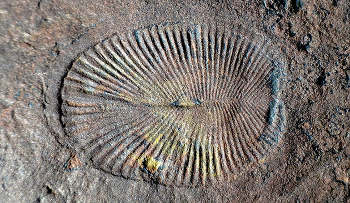 Fossil photo from the Ediacara Biota. (Photo by James Gehling)

“Many of them are outright bizarre in appearance, and do not resemble any organisms alive today,” said Lidya Tarhan, a postdoctoral fellow at Yale and first author of the study. “We would like to understand their relationship to the complex animals that evolved shortly thereafter. Are the Ediacara organisms some sort of failed evolutionary experiment, or do they include the ancestors of the animals that subsequently colonized the oceans?”

A big part of that answer involves figuring out how these fossils were able to form. The animals themselves were entirely soft-bodied; they lived before the evolution of shells, teeth, or bones, which are typically the only parts of an organism to become fossilized.

What the researchers realized, they said, was that oceans during the time of the Ediacara Biota were much richer in dissolved silica than they are today. This enabled the transformation of loose sand around the animals into rock to occur over a matter of hours or years, rather than the usual timeframe of thousands to millions of years.

“The Ediacara organisms were rapidly buried by sand during underwater storm events,” Tarhan noted. “This process of cementing the sand grains around them must have happened rapidly because otherwise, by the time the carcasses rotted away, the sand burying them would have simply collapsed into the hollow left by the erstwhile carcass.”

The team conducted its research using detailed microscope-based techniques. The researchers were able to measure the elemental composition of cements on a micron scale.

The paper was co-authored by Ashleigh Hood, who is a Yale postdoctoral associate; Derek Briggs, Yale’s G. Evelyn Hutchinson Professor of Geology and Geophysics and curator of invertebrate paleontology at the Yale Peabody Museum of Natural History; Mary Droser of the University of California-Riverside; and James Gehling of South Australian Museum and the University of Adelaide.