‘By the way, I’m visually impaired’: Sharing her disability helped others feel more welcome at work

In her 23 years at Microsoft, Angela Mills has been many things: a consultant, technical evangelist and manager for various products including Windows Server, Identity Management and Xbox Live. She is a polished presenter, compassionate mentor and a smart leader who works well with developers, sellers and customers. Last year, she took a sabbatical and began learning how to co-pilot a plane.

Mills also happens to be legally blind, a degenerative condition from childhood that she often hid at work. Over the years, close coworkers knew she used a screen reader and couldn’t see words on a whiteboard due to her lack of central vision. The disability is imperceptible to many people, and Mills, who can see peripherally, rarely talked about it until recently.

“I was effectively trained from an early age that no good comes from disclosing my disability or making too much of it,” says Mills, who now leads a team with Microsoft’s PlayFab game developer platform. 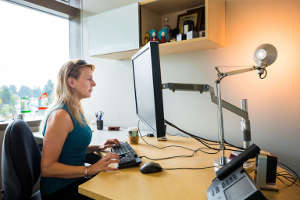 Angela Mills in her office at Microsoft in Redmond, Washington. Photo by Dan DeLong

After her eyesight began to deteriorate, she was bullied in school and discouraged by a career counselor who saw few opportunities for people with disabilities. “He looked at careers he thought were appropriate for people who are blind and sent me to basket-weaving classes, which I totally sucked at,” she says.

After going to a university and earning her degree, Mills faced repeated hiring discrimination. By the time she landed a consultant job at Microsoft in the ‘90s, she was understandably guarded about her disability. She didn’t want people to feel sorry for her, or think she was less capable or needy of help.

But 20 years after joining the company, she slowly began to share her story. In 2017, she was invited to talk at an internal team event as one of three coworkers with a disability describing their experiences. It was the first time she had talked about her disability to an audience without identified disabilities, and she found the event led to positive insight into the experience of people with disabilities at work.

“You make all these assumptions about people, and unless someone has a visible disability, most people aren’t thinking about it,” she says.

A year later, her mindset continued to change when Microsoft released Seeing AI, a mobile app that describes nearby people, text and objects for users with low vision. It enabled Mills to do things like find meeting rooms and pick out lunch items without having to ask someone to help — for the first time ever. When encouraged to share the app’s profound impact for news stories, she reluctantly did.

The spotlight unnerved her, but helped her realize the effect her story had on other people. She received a flood of support from coworkers and strangers, including younger people with visual disabilities who were inspired by her.

“It was the first time I thought, ‘I might not like the attention, but if my 20, 30, 40 years of figuring stuff out can help other people, I need to get out there and tell my story,” she says.

In the past, coworkers who didn’t know about her disability sometimes had misperceptions. They thought she was aloof when she didn’t say hi, or that she was insecure because she didn’t make eye contact — not knowing Mills can’t see directly in front of her. So she took another big step this year, when she mentioned her disability at a major presentation in front of a large group of colleagues.

“One thing I’ve learned is to not just throw information out there, but tell people what you want them to do with it,” she says. She stood on stage, introduced herself and said, “And by the way, I’m visually impaired.” Then she followed up with a request: Please say hi and your name if you see me in a hallway, because I likely won’t recognize you.

The reaction was powerful. People thanked her for sharing and asked what they could do to help her participate fully at work. Some knew she had a disability but didn’t know what it was like for her. The experience helped coworkers reduce their unconscious biases and think more inclusively.

“It really took down those walls right way,” says Jennifer Roland, PlayFab executive business administrator, who works with Mills. “Everyone’s going to engage at a different level, and it helped people feel more comfortable asking questions to make sure we’re including everyone.”

Hidden or unhidden, Mills’ disability has long been a strength at work, with her keen awareness of accessibility for customers, strong problem-solving and communications skills as a leader, and a unique perspective that benefits everyone. When she can’t read the whiteboard in a meeting, neither can anyone on the phone.

“I have been solving problems on a daily basis since I was 9 years old,” Mills says, explaining her ability to make good decisions quickly on limited data.

“Every person with a disability has honed skills to work around the limitations that their disability brings. I cannot imagine having been more successful in my career if I didn’t have the disability.”

She considers herself lucky that her skills align with a career she loves at a company that embraces inclusivity and diversity. She credits a culture shift in recent years, led by Microsoft CEO Satya Nadella and Chief Accessibility Officer Jenny Lay-Flurrie, that made her feel comfortable enough to share her disability.