In addition to being selected as one of 50 scholars awarded fellowships each year at the prestigious Radcliffe Institute at Harvard University, the UA’s Feryal Ozel has won the 2013 American Physical Society’s Maria Goeppert Mayer Award for her cutting-edge research on neutron stars.

An associate professor of astronomy at the University of Arizona, Ozel has won the 2013 American Physical Society’s Maria Goeppert Mayer Award for her work on neutron stars and her dedication to public outreach and education in science and astronomy. In addition, this year she is completing a prestigious fellowship at the Radcliffe Institute at Harvard University. Ozel came to the UA in 2003 as a NASA Hubble fellow and began a faculty position in 2005.

Neutron stars are super energetic dense remnants of collapsed stars comprised primarily of subatomic particles called neutrons. According to some calculations, the average size of a neutron star is around 12 kilometers, or 7.5 miles, even though it can pack about 1.5 times the mass of our sun. 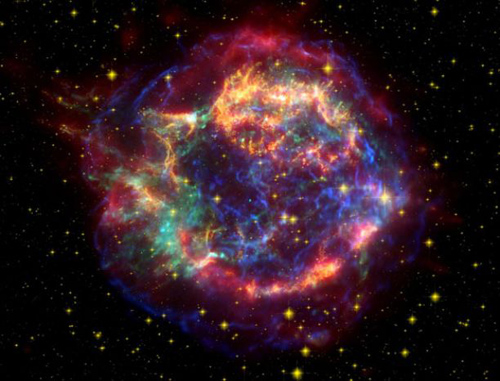 A small, bright neutron star can be seen as a tiny blue dot at the center of this image. (Image credit: NASA)

Ozel is investigating ways to more precisely measure the size of these solar relics, either by analyzing the spectrum of light waves that they emit, or by measuring and modeling the periodic variation of signals from neutron stars, which rotate around their own axes like a spinning top.

“Think about a spherical lamp,” Ozel said. “You cover most of it with some paper but leave a circular hole and spin the lamp around itself. If somebody’s looking at you doing this, they’ll see flashes of the brighter side that you didn’t cover.” 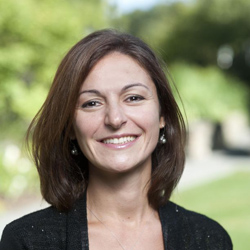 “This happens naturally on neutron stars where one side becomes brighter than the other. Part of the surface is hotter than the rest, and when it’s hotter, it’s brighter. We see the variation in brightness in stars that spin about their axis as an on-off signal,” Ozel said, as though someone were switching the light on and off.

“We can measure how big they are based on this periodic variation in brightness.” Astronomers can further use the variation in light to make a map of neutron stars’ surfaces.

Ozel’s second project focuses on black holes, preparing for an event that could change how we understand what are perhaps the universe’s most mysterious entities: super-massive invisible objects that absorb anything that draws near to them, even light.

“Normally, when we look at astrophysical phenomena, we look after the fact,” Ozel said. “It’s not a controlled experiment. Once something happens we can observe it and then we do some detective work to reconstruct what transpired.”

“Right now there is something happening in our galactic center that is different. For once we know something that is going to happen next year and we are trying to make predictions for what it is going to look like.”

Ozel’s “something” is a cloud, most likely comprised of hydrogen gas, about three times the size of the Earth and heading toward the black hole at the center of our own galaxy at considerable speed.

It will arrive there sometime around July, providing astronomers a chance to observe the result of the impact of the cloud with the black hole.

The cloud is moving fast enough through space that Ozel and her colleagues predict it will create a shockwave in front of it when it approaches the black hole, like the supersonic boom heard when an airplane breaks the sound barrier, Ozel said. The shockwave should emit radiation observable through radio telescopes.

“Shortly after that we expect that the cloud is going to be basically wrenched apart,” Ozel said. 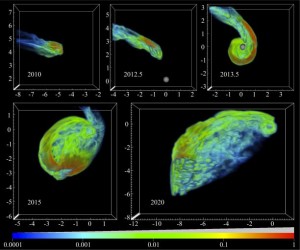 Astronomers hope to watch as the black hole at the center of our Milky Way rips apart a mysterious cloud composed primarily of hydrogen gas sometime around July 2013. The image shows a computer simulation predicting how the cloud changes over time. (Image credit: P. Anninos)

Astronomers can infer that the intense gravity of black holes absorbs material from objects that come too near, Ozel said, but normally aren’t able to see it happen in real time. The collision of the gas cloud with the black hole at the center of our own galaxy will give scientists a chance to learn about the environment of a black hole.

“It’s the first time we will be able to see a black hole having lunch,” Ozel said.

“If this cloud makes a shock, of course we won’t be able to hear it, but we will be able to see the light from it,” she explained. “That will tell us exactly the temperature and the density of the material around the black hole, among other things.”

Ozel’s work involves developing computational models using known physics to predict what the environment around black holes could be like, or what the surface of a neutron star should look like.

“That is the forward approach,” Ozel said. “The backward approach is to look at the data” and make inferences about these mysterious objects from what has been seen in observational studies. “I love doing both,” she added.

“Ultimately these ideas are useful to make future missions successful, or in the case of our black hole, advising radio astronomers on the best strategies to observe the collision of the cloud.”

Ozel will conclude her fellowship at Radcliffe Institute after the 2012-13 year and return to the UA.