Many animals, including humans, harbor ingrained biases to act when they can obtain rewards and to remain inactive to avoid punishment. Sometimes, however those biases can steer us wrong. A new study finds that theta brainwave activity in the prefrontal cortex predicts how well people can overcome these biases when a better choice are available.

PROVIDENCE, R.I. [Brown University] — Vertebrates are predisposed to act to gain rewards and to lie low to avoid punishment. Try to teach chickens to back away from food in order to obtain it, and you’ll fail, as researchers did in 1986. But humans are better thinkers than chickens. In the May 8 edition of the Journal of Neuroscience, researchers show that the level of theta brainwave activity in the prefrontal cortex predicts whether people will be able to overcome these ingrained biases when doing so is required to achieve a goal.

The study helps explain a distinctly human mechanism of cognition, said the lead researchers at Brown University, and could be applied to studying and treating reward-seeking or punishment-avoidance conditions such as addiction or obsessive-compulsive disorder.

Despite how we have evolved, life doesn’t always encourage acting to gain reward or freezing to avoid punishment. Sometimes we must restrain ourselves to gain a reward (baseball batters can get on base by not swinging at bad pitches) or take action to avoid a penalty (tax cheaters can come forward during amnesties). Acting counter to our ingrained Pavlovian biases is a matter of the brain recognizing the conflict between the rational course of action and the instinct.

“We have suggested that more advanced brain mechanisms in the prefrontal are needed to exert cognitive control over behavior in these circumstances,” said Michael Frank, associate professor of cognitive, linguistic and psychological sciences and the paper’s senior author. “This study provides evidence that temporally specific brain activity within the prefrontal cortex is related to this ability, both between and within individuals.” 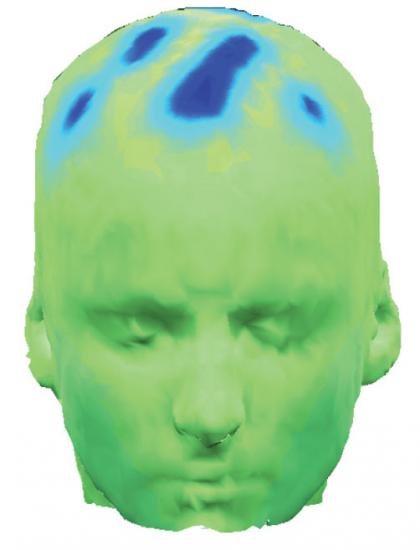 Telltale brainwaves. Choosing an action that is counter to habit takes specific brain activity (detected as brainwaves in blue) but it can be done. The research could prove useful in treating addiction. Image credit: Michael Frank and James Cavanagh/Brown University

That brain activity could be measured and quantified as theta brainwaves. Brown postdoctoral researcher James Cavanagh led the research in which he recruited 34 people to play a custom-designed computer game while wearing EEG scalp monitors.

Over many rounds, players tried to learn what to do when presented with one of four distinct symbols, each of which corresponded to a different scenario.

Cavanagh programmed the scenarios usually, but not always, to reward the proper behavior. For this reason, people had to pay attention to what was likely, rather than merely memorize a simple reliable pattern.

Cavanagh and his co-authors measured how well people learned the proper action for each scenario. With the advantage of instinct, almost everyone learned to click for a reward. Most people also managed to learn not to click to avoid penalty and even managed in similar numbers to click to avoid penalty. Like the chickens, however, significantly fewer people could restrain themselves in order to gain a reward.

Those who were bad at overcoming one Pavlovian bias were much more likely to fail at the other.

While the subjects were playing the game, the experimenters also measured theta brainwave activity in each subject’s prefrontal cortex — for instance at the exact moment they saw the distinct symbols of the tasks.

The main idea of the study was to correlate the subjects’ theta brain activity during the tasks with their ability to overcome ingrained bias when appropriate. Sure enough, the subject’s ability to repress Pavlovian bias was predicted by the enhancement of theta during the trials when the bias was unwanted, compared to when it provided proper guidance. 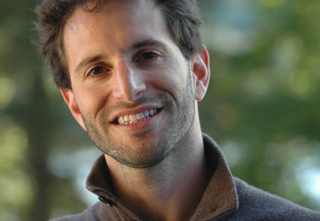 “Some people are really good at it and some are not, and we were able to predict that from their brain activity,” Cavanagh said.

This was not only true when comparing individual subjects, but also when comparing the subjects to themselves at different times (e.g., some subjects’ abilities wavered from task to task and the theta varied right along).

Many psychological factors could have confounded the results — differential sensitivity to gains and losses, for example – but Cavanagh and Frank controlled for those with the help of a sophisticated computer model that accounts for and statistically disentangles the relationship of bias and theta from those other influences.

All of the study subjects were screened to ensure they were psychiatrically healthy. In these subjects, the study results not only confirmed that people harbor the ingrained biases, but that they differ in their ability to overcome them. Frank said the variations likely come from innate and situational factors. Evidence suggests that the degree of ingrained bias may have genetic and neurological roots, he said, but can also vary within the same individual based on factors such as fatigue or stress.

For people with psychiatric disorders, Cavanagh said, the predictive value of measurable theta activity for behavioral patterns could become an important tool for diagnosis and predicting treatment outcomes.

Frank, who is affiliated with the Brown Institute for Brain Science, added that the lab has begun studying whether people can improve behavior by purposely modulating theta activity. If so, that could lead to a therapy for addiction.

“We are beginning studies that allow us to safely manipulate activity in specific frequencies like theta in the frontal cortex which will allow us to assess the causal role these signals may be playing,” he said.

It’s not easy to work against primal intuition, but people have that ability and now researchers know how that ability is reflected in brains.

“This tells us a lot about the neurobiology of why we’re special,” Cavanagh said.

In addition to Cavanagh and Frank, other authors on the paper are Ian Eisenberg of Brown, Marc Guitart-Masip of University College London, and Quentin Huys of the University of Zurich.