The father of neurosurgery, Yale’s Harvey Cushing, MD, left a remarkable gift to science. Now, for the first time, his collection of brains is being used for active research.

As Maya Lodish, MD, and her five-year-old daughter entered a room at the Yale School of Medicine, they were stunned to see the jars, hundreds and hundreds of jars. Inside, suspended in clear liquid and illuminated by yellow light, were brains. Alongside the brains were photographs of surgeries: the back of a man’s head sewn up like a seam in a pair of trousers, a young boy with protrusions from his skull that looked like rolling mounds of earth, a human brain posed on a stool.

The visit happened by chance. Dr. Lodish, a pediatric endocrinologist at the National Institutes of Health (NIH), was on a scavenger hunt organized as part of her tenth reunion at Yale Medical School.

“What a crazy coincidence,” Dr. Lodish said to herself. “I devote my career to studying kids with Cushing’s disease, and here I am, surrounded by these brains he operated on.” 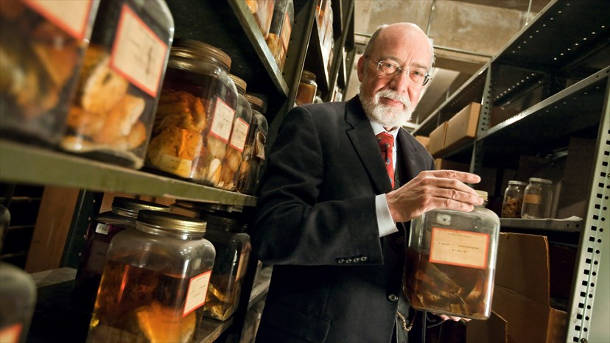 The brains, which were not on display when Dr. Lodish was a student at Yale, are part of the vast collection assembled in the early 1900s by Dr. Harvey Cushing, widely considered the father of modern neurosurgery. The brains had belonged to patients who had some of the country’s very first brain surgeries. After a conversation and tour with Cushing Center coordinator Terry Dagradi, Dr. Lodish began to wonder if the extraordinary genetic record inside these jars could be used to answer questions that arise in her own research, which focuses on the genetics behind pituitary tumors in children.

One of Dr. Lodish’s primary areas of inquiry is Cushing’s disease. This is a condition where a non-cancerous tumor called an adenoma grows inside the pituitary gland, which is located just below the base of the brain. The disease can cause the body to produce too much of the stress hormone cortisol, leading to weight gain, poor growth, high blood pressure, and diabetes. (Dr. Cushing linked the excess hormone to the condition in 1932, so the disease was named after him.) Dr. Lodish also studies growth hormone excess, a rare but sometimes deadly disorder in still-growing children. This hormonal imbalance leads to gigantism, or abnormal growth; in adults, this hormonal excess can also lead to a condition called acromegaly, in which a person’s bones—including hands, feet, and face—increase in size.

During Dr. Cushing’s era, the science of genetics was still in its infancy. Today, genetics is considered key to finding cures and advancing treatments for life-threatening conditions. Dr. Cushing operated on patients who had genetic conditions that scientists now know lead to excess growth hormone, but he diagnosed them using a much more rudimentary process. Dr. Lodish asked herself: Did Cushing’s patients have similar genetic syndromes that are known to be associated with gigantism? Could a modern-day analysis of these century-old samples help improve our understanding of how medical conditions have evolved over time?

Born in 1869, Dr. Cushing earned his Bachelor’s degree from Yale University in 1891 and his doctorate of medicine from Harvard University, four years later. He went on to have a groundbreaking career in neurosurgery, pioneering numerous techniques in the operating room such as local anesthesia, blood pressure monitoring and sterilization practices.

“Cushing was an immense figure for neurosurgery,” says Dennis Spencer MD, chair of the Department of Neurosurgery at Yale Medicine for nearly 20 years. “He essentially founded the field, and he changed the mortality rate of brain surgeries from 80 percent to eight percent over the course of his career.”

While working as a neurosurgeon at Johns Hopkins Hospital and then Harvard’s Peter Bent Brigham Hospital, Dr. Cushing recorded meticulous notes about his patients and took their photos. He kept every tissue specimen he removed during operations and autopsies for further study. He also asked his patients if they’d donate their brains to his collection upon their death.

In 1933, Dr. Cushing returned to Yale as professor of neurology in the School of Medicine. He brought along his massive collection of tissues, photographs, microscopic slides, notes, and a trove of rare books. Neurosurgeons and pathologists came from all over the country to visit the collection. “It was part of every neurosurgeon’s learning about how they could better operate on the brain,” says Dr. Spencer.

After decades of display in a Yale University museum, the collection was seen as outdated. In 1979, it was moved to the sub-basement of a student dormitory. There, the specimens went unseen, except for the occasional late-night student visitors who broke into the basement to “commune” with Dr. Cushing’s brains. In the early 1990s, medical student Christopher Wall approached Dr. Spencer with an idea about doing his thesis on the collection, and they began the long process of preparing it for public display once again. In June 2010, the collection in its current, impressive state opened in the new Cushing Center, within the Harvey Cushing/John Hay Whitney Medical Library.

Connecting past and present

After the reunion, Dr. Lodish approached Dr. Spencer to inquire about the possibility of sampling and analyzing the brains for the first time. He committed to the project, believing that it had both historical and scientific value: “It gives us a chance to look at the evolution of genetic control of a particular disease,” he says.

Dr. Lodish also suggested that the medical school advertise an opportunity for a medical student to collaborate with them and to write a thesis about the project. Many applied. The doctors chose Cynthia Tsay, then a first-year medical student.

“As a history of science and medicine major in college, I have always been intrigued by how the study of the past can inform the present and future,” says Tsay.

Now, much like Dr. Cushing, who pored over texts from the past in order to aid the present, Dr. Lodish and Tsay are using the legend’s specimens in their work.

First, they tapped the large database that Dagradi had created to catalogue the brain specimens. They turned to Dr. Cushing’s surgical notes to determine which samples came from patients with pituitary tumors secreting excess hormones. They narrowed the field down to 25 brains of interest. Tsay worked with Dr. Spencer to extract samples of the brain tissues, which were then sent to the laboratory of the section on endocrinology and genetics at the NIH.

“Working with Dr. Spencer was incredible,” says Tsay. “He played such an instrumental role in the restoration of the brains and was so knowledgeable about the collection.”

Tsay then moved on to work at the NIH, where she spent her days extracting, sequencing, and analyzing the DNA from 12 of the specimens. They took 500 milligrams of tissue from each sample. She also went to Dr. Lodish’s clinic to observe patients with gigantism and Cushing’s disease. “Meeting these patients made me appreciate, even more, what a privilege it was to have this opportunity,” she says.

Now Tsay is working with mentors in the NIH lab to sequence and studying the genes. Their team, led by Constantine Stratakis, studies the genetics of endocrine-related tumors. Their past investigations have revealed new mutations in genes leading to gigantism, and another, related endocrine disease called Carney Complex.

She plans on returning to the NIH to finish the research and analysis, and to write up the project as her medical school thesis.

But, as Dr. Cushing might appreciate, this is not the end of the story.

“Other uses of these samples will probably emerge,” says Dr. Spencer, “because the field of genetics is evolving so rapidly, and they’re such well-preserved tumors.”