Piecing together the events of the farthest touchdown a manmade spacecraft has ever made on an alien world reveals new clues about Titan’s surface and helps plan future missions to moons and planets.

The Huygens probe, ferried to Saturn’s moon Titan by NASA’s Cassini spacecraft, bounced, slid and wobbled its way to rest in the 10 seconds after touching down on Titan in January 2005, a new analysis reveals. The moon’s surface is more complex than previously thought.

Scientists reconstructed the chain of events by analyzing data from a variety of instruments that were active during the impact, in particular changes in the acceleration experienced by the probe. The probe was supplied by the European Space Agency and named after the Dutch 17th century astronomer Christiaan Huygens.

The analysis reveals that, on first contact with Titan’s surface, Huygens dug a hole about 4 1/2 inches (close to 12 centimeters) deep, before bouncing out onto a flat surface. The Huygens probe had a mass of 450 pounds (204 kilograms). It hit the ground with an impact speed that was similar to dropping a ball on Earth from a height of 3 1/2 feet (1 meter). Due to the lower gravity on Titan, the probe weighed only 60 pounds or 28 kilograms on Titan.

The probe, tilted by about 10 degrees in the direction of motion, then slid 12 to 16 inches (30 to 40 centimeters) across the surface. It slowed due to friction with the surface and, upon coming to its final resting place, wobbled back and forth five times, with each wobble about half as large as the previous one. Huygens’ sensors continued to detect weak vibrations for another two seconds, until motion subsided nearly 10 seconds after touchdown.

“Huygens landed in what looks like a big flood plain,” explained Erich Karkoschka, a senior staff scientist at the UA Lunar and Planetary Laboratory, who co-authored the study, which is published in the journal Planetary and Space Science. “There was a slight breeze in the lower atmosphere, causing the probe to parachute down at an angle. Because of the impulse, it bounced off sideways before it came to rest.” 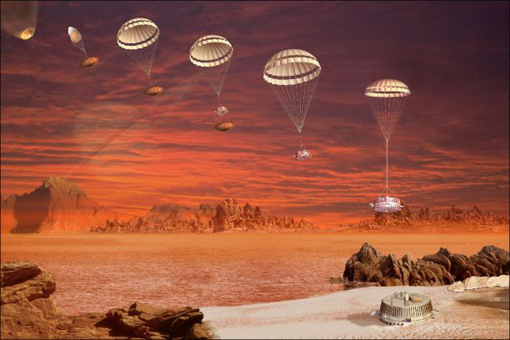 With Saturn looming above the horizon, the Huygens probe parachutes onto Titan's surface in this artist's impression. (Image credit: NASA)

Like detectives poring over the scattered evidence of a crime scene, Karkoschka and his collaborators, Stefan Schröder and Ralph Lorenz, pieced together data Huygens sent to Earth during its descent through the hazy atmosphere of Saturn’s largest moon in 2005, which lasted about two and a half hours. They compared the instrument data with results from computer simulations and a drop test using a model of Huygens designed to replicate the landing.

“A spike in the acceleration data suggests that during the first wobble, the probe likely encountered a pebble protruding by almost an inch [2 centimeters] from the surface of Titan, and may have even pushed it into the ground, suggesting that the surface had a consistency of soft, damp sand,” said Stefan Schröder of the Max Planck Institute for Solar System Research, lead author of the paper reporting the results.

“It is like snow that has frozen on top,” Karkoschka said. “If you walk carefully, you can walk as on a solid surface, but if you step on the snow a little too hard, you break in very deeply.”

Had the probe impacted a wet, mud-like substance, its instruments would have recorded a ‘splat’ with no further indication of bouncing or sliding. The surface therefore must have been soft enough to allow the probe to make a hole, but hard enough to support Huygens rocking back and forth.

“We also see in the Huygens landing data evidence of a ‘fluffy’ dust-like material – most likely organic aerosols that are known to drizzle out of the Titan atmosphere – being thrown up into the air and suspended there for around four seconds after the impact,” said Schröder. 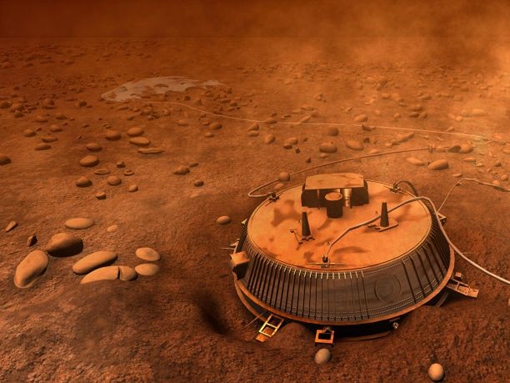 In this image reconstructed from Huygens data in 2006, the probe is pictured in a hole it excavated during impact. Now, using all data available, scientists have refined the sequence of events and discovered that the probe bounced out of its hole and slid sideways before coming to rest on undisturbed terrain. (Image credit: NASA)

Since the dust was easily lifted, it was most likely dry, suggesting that there had not been any rain of liquid ethane or methane for some time prior to the landing.

“You don’t get rain very often on Titan,” said Karkoschka, explaining that heavy downpours of liquid methane may occur decades or centuries apart. “When they do occur, they carve the channels we see in the pictures Huygens recorded as it approached the surface.”

“The top layer at the landing site was completely dry, suggesting it hadn’t rained in a long time,” he added.

“When Huygens landed, its downward-shining lamp warmed up the ground and caused methane to evaporate,” Karkoschka explained. “That tells us that just below the surface, the ground probably was wet.”

“This study takes us back to the historical moment of Huygens touching down on the most remote alien world ever visited by a landing probe,” added ESA’s Cassini-Huygens project scientist, Nicolas Altobelli. “Huygens data, even years after mission completion, are providing us with a new dynamical ‘feeling’ for these crucial first seconds of landing.”

Karkoschka added: “Our analysis goes beyond Titan in that it gives us a better idea of how a probe lands, how we can measure surface consistencies and other parameters that are important for future missions sending spacecraft to touch down on moons and planets.”

The Cassini–Huygens mission is a cooperative project of NASA, the European Space Agency and the Italian Space Agency. The Jet Propulsion Laboratory, a division of the California Institute of Technology in Pasadena, Calif. manages the mission for NASA’s Science Mission Directorate, Washington, D.C.

– By Jia-Rui Cook and Daniel Stolte