The fungal infection that killed a record number of amphibians worldwide leads to deadly dehydration in frogs in the wild, according to results of a new study.

Their findings confirm what researchers have seen in carefully controlled lab experiments with the fungus, but San Francisco State University biologist Vance Vredenburg said the data from wild frogs provide a much better idea of how the disease progresses.

“The mode of death discovered in the lab seems to be what’s actually happening in the field,” he said, “and it’s that understanding that is key to doing something about it in the future.” 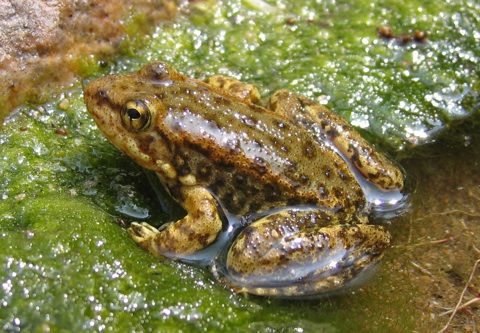 The mountain yellow-legged frog is an amphibian species affected by the chytrid fungus. Image credit: USGS

Results of the study are published on April 25, 2012, in the journal PLoS ONE.

“Wildlife diseases can be just as devastating to our health and economy as agricultural and human diseases,” said Sam Scheiner, NSF program officer for the joint National Science Foundation-National Institutes of Health Ecology and Evolution of Infectious Diseases program, which funded the research.

At NSF, the Directorates for Biological Sciences and Geosciences support the program.

“Bd has been decimating frog and salamander species worldwide, which may fundamentally disrupt natural systems,” said Scheiner. “This study is an important advance in our understanding of the disease–a first step in finding a way to reduce its effects.”

At the heart of the new study are blood samples drawn from mountain yellow-legged frogs by Vredenburg and colleagues in 2004, as the chytrid epidemic swept through California’s Sierra Nevada mountains.

“It’s really rare to be able to study physiology in the wild like this, at the exact moment of a disease outbreak,” said University of California, Berkeley ecologist Jamie Voyles, the lead author of the paper. 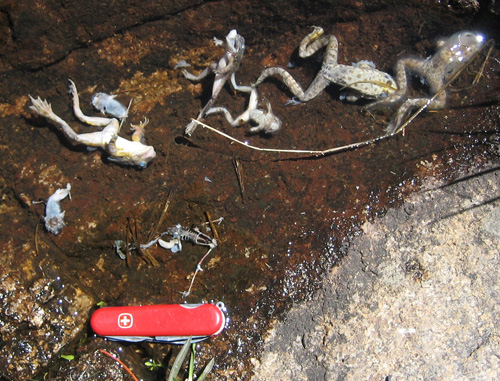 Unfortunately, it is a study that can’t be duplicated–at least not in the Sierra Nevada.

Frog populations there have been devastated by chytrid, declining by 95 percent after the fungus was first detected in 2004.

“It’s been really sad to walk around the basins and think, ‘wow, they’re really all gone,'” Vredenburg said.

The chytrid fungus attacks an amphibian’s skin, causing it to become up to 40 times thicker in some instances.

Since frogs depend on their skin to absorb water and essential electrolytes like sodium from their environment, Voyles and her colleagues knew that the fungus would disrupt fluid balances in the infected amphibians.

But they were surprised to find that electrolyte levels were much lower than anticipated. “It’s clear that this fungus has a profound effect in the wild,” Voyles said.

Scientists want to learn as much as they can about how the fungus affects wild amphibians, with the hope that these findings will lead to better treatments for the infection.

“The chytrid fungus is causing these frogs to become severely dehydrated, even though they are literally surrounded by water,” said Cheryl Briggs, a University of California, Santa Barbara biologist and co-author of the paper.

The new study suggests that individual frogs being treated for the infection might benefit from having electrolyte supplementation in the advanced stages of the disease.

Researchers like Vredenburg already are experimenting with different ways of treating individual frogs, such as applying antifungal therapies or inoculating the frogs with “probiotic” bacteria that produce a compound that kills the fungus.

“The disease is not very hard to treat in the lab with antifungals,” Vredenburg said. “But in nature, the disease is still a moving target.”

It is still unclear exactly how chytrid spreads across a region, and which frogs might be susceptible to re-infection after treatment.

Earlier this year, Vredenburg and colleagues showed that a common North American frog might be an important carrier of the infection.

The chytrid fungus has killed off more than 200 amphibian species across the globe, but Voyles said the research offers “a glimmer of hope that it might be possible to do something to mitigate the loss.”

Other co-authors of the paper are Tate Tunstall and Erica Bree Rosenblum of UC Berkeley, and John Parker of University of California, San Francisco.