From working on solar-powered energy in India and conducting historic research on the Jewish community of Buenos Aires, to studying the world parrot crisis and examining music and dance in Bali, the four 2011 Plastino Scholars recounted their experiences at a dinner on Thursday, April 26, that celebrated their experiences and welcomed the incoming 2012 cohort.

Established in 2007 by a generous gift from Dave Plastino, a 1978 graduate of the University of Delaware’s College of Arts and Sciences, the Plastino Scholars Program awards grants to undergraduates to support self-designated, off-campus projects of their passion.

“These awards give students a chance to discover and follow their interests,” said Plastino. “It takes a self-motivated individual, but any undergraduate at UD has the opportunity to become a Plastino Scholar.”

The 2012 Plastino Scholars were chosen from the largest pool in the program’s history.

“More students applied to the program this year than ever before, and their proposals were all incredibly sophisticated and compelling,” said CAS Dean George Watson. 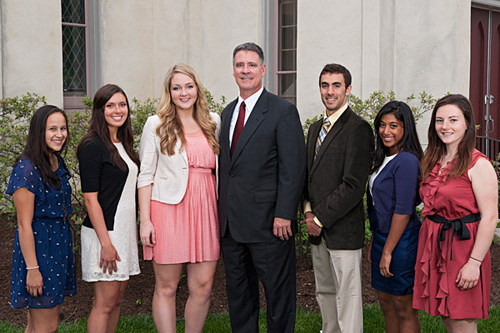 Jill Farquharson, a political science major from New Jersey, and Katie Yoder, a visual communication major, also from New Jersey, will travel the East Coast to interview people they meet about the country’s major political, economic and social issues. Beginning in New Jersey and ending in New Orleans, they will travel through 10 major cities—as well as through suburbs, small towns and communities—to expose themselves to various cultural settings and provide themselves with diverse populations to interview. Farquharson and Yoder plan to document their entire journey through film and photography, and promote their experience through social media and online blogs. They hope to complete this project in time for the 2012 elections.

Elizabeth Hetterly, a biology major and Honors Program student from Bear, Del., is a Dean’s Scholar who has just completed an independent study course on maternal health in Bangladesh, and this summer, she will travel there to study underlying causes of maternal mortality. There, she will work with an international health research institution to study integrated, community-based postpartum care as a strategy to reduce maternal mortality.

Daniel Reyes, an anthropology major and Honors Program student from West Milford, N.J., wants to study food system reform in the United States and Guatemala. He will begin this project working on the organic farm at the Women’s Environmental Institute, an organization in North Branch, Minn., dedicated to social justice and environmental sustainability. He will also undertake a research project to create educational and outreach campaigns to improve community and market connections in low-income areas of Minneapolis and St. Paul. The second half of Reyes’ project will be completed in winter of 2013, when he will spend fives weeks in Xela, Guatemala, living with a Guatemalan family, receiving Spanish tutoring, and working with a local farming collaborative in the field and at farmers’ markets.

Marcela Omans, an anthropology major and Honors Program student from Maryland, was born in and adopted from Bogota, Colombia. As a Plastino Scholar, she will return there to examine the adoption process of which she was a part of 20 years ago. Living both in the orphanage and in a hotel where adoptive parents often stay, she hopes to better understand the motivations and reasons for choosing adoption from both perspectives. Omans will travel across Colombia, starting in Bogota before moving on to Cartagena, a coastal city in the Andes Mountains, and Leticia, located in the Amazon rainforest, where she hopes to learn more about the culture of her birth country.

As a Plastino Scholar, Allison Solowsky, an international relations major from Blairstown, N.J., will study how the East Indians living in Guyana define their relationship to India. Solowsky, who was adopted by an American family as an infant, knows only one thing about her birth mother—that she was an Indian immigrant from Guyana. By traveling to Guyana and then India, she will study her own culture and heritage, which is something she has long dreamt of doing.