Bird in the Hand

When University of Delaware Prof. Jack Gelb, Jr., was given a taxidermy specimen of a Blue Hen by a retiring colleague in the Department of Animal and Food Sciences, he realized that this particular example of the Delaware state bird was somewhat the worse for wear.

And so Gelb, who is chairperson of the department as well as director of UD’s Avian Bioscience Center, turned to the Department of Art Conservation for expert help.

“This was a wonderful opportunity for me to learn about natural history materials,” said Elena Torok, now a third-year graduate student in the Winterthur-University of Delaware Program in Art Conservation. “We happily agreed to work” on the project.

The Blue Hen was one of two that had been prepared and mounted by a taxidermist around 1985 for a display at the Delaware Museum of Natural History featuring the state bird. Paul H. Sammelwitz, now professor emeritus of animal and food sciences, loaned the specimens to the museum at the time, and one was later returned to him.

When Sammelwitz retired recently, he gave his Blue Hen to Gelb, who decided to display it in the College of Agriculture and Natural Resources (CANR). However, “It was in need of restoration,” he noted.

“When the bird arrived in the lab [at Winterthur Museum] its feathers were covered with a layer of dirt and grime,” Torok said. In addition, some feathers had become dislodged, and bright-red paint that the taxidermist had used to enhance the comb and wattle was flaking, she said. 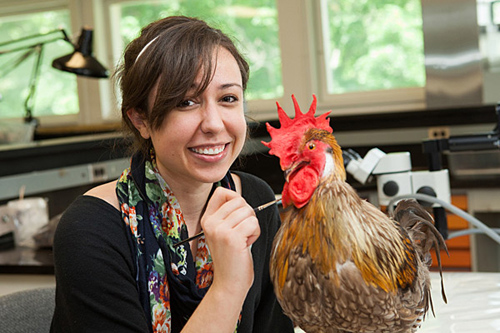 Elena Torok, a student in the Winterthur/University of Delaware Program in Art Conservation (WUDPAC), works on the specimen in a lab at Winterthur. Photo by Ambre Alexander

Torok and Winterthur scientists used radiography equipment to analyze the Blue Hen, and Torok cleaned the specimen, reshaped the feathers and touched up the paint using special materials. She said the project taught her a great deal “about the challenges associated with the long-term preservation of taxidermy [and] also about the history of the Blue Hen in Delaware.”

Gelb is having a display case built for the bird and hopes to have it available for view sometime next year.

About the Delaware Blue Hen

The Blue Hen is not a recognized breed but has been a part of state history since the Revolutionary War, when a military regiment included soldiers under the command of Capt. John Caldwell, a Kent County owner of gamecocks, including some with blue feathers.

Caldwell’s men became known as the “Blue Hen’s Chickens” for their courage and fighting ability, and in 1939 the General Assembly adopted the Blue Hen Chicken as the state bird. University sports teams have used the nickname “Fightin’ Blue Hens” since 1911.