Winemakers have long known that blending different grape varietals can favorably balance the flavor characteristics of the wine they produce. In the future, makers of advanced biofuels might use a similar strategy, blending different feedstock varieties to balance the energy characteristics of the transportation fuel they produce.

A collaborative study by researchers with the U.S. Department of Energy (DOE)’s Joint BioEnergy Institute (JBEI), a bioenergy research center led by Berkeley Lab, and the Idaho National Laboratory (INL) has shown that an ionic liquid proven to be effective for pre-treating individual biofuel feedstocks is also effective at pre-treating multiple different feedstocks that have been mixed and densified into a blend.

“Our results show that an ionic liquid pre-treatment can efficiently handle mixed feedstocks that have been milled and densified into pellets, and can generate high yields of fermentable sugars regardless of upstream processing,” says Blake Simmons, a chemical engineer who heads JBEI’s Deconstruction Division. “This indicates that blending and densifying a wide range of feedstocks has significant potential for helping to make biofuels a cost-competitive transportation fuel technology.”

Simmons and his JBEI colleague Seema Singh, director of JBEI’s Biomass Pretreatment group, led the JBEI/INL study in which four biomass feedstocks, representing the general classes of plants well-suited to serving as fuel crops, were mixed and milled into either flour or pellets then pre-treated with 1-ethyl-3-methylimidazolium acetate ([C2mim][OAc]), the ionic liquid used at JBEI as a benchmark for biomass processing. The objective was to determine the impact of mixing and densification on the efficiency at which the complex polysaccharides in cellulosic biomass could be converted into fermentable sugars for fuel production.

“Lignocellulosic biorefineries must be able to efficiently process available regional feedstocks at cost-competitive prices year round, but feedstocks markedly vary from region-to-region,” Singh says. “Also, individual feedstocks within a given region are also quite variable, depending on weather conditions, handling, storage and crop variety. Blending and densifying different feedstocks to create a single uniform feedstock has been proposed as a solution, but not much scientific attention has been paid to the efficiency of converting mixtures of feedstocks into fermentable sugars and fuels.” 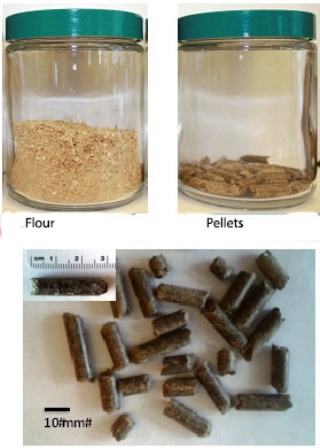 JBEI and INL researchers densified the energy content of a blend of biofuel feedstocks by milling the mixture into flour or pellets. Densification makes transporting the feedstocks easier and less expensive. Image credit: by Berkeley Lab

Given that global temperatures are now setting record highs and that the burning of fossil fuels is releasing an additional 9 billion metric tons of excess atmosphere-warming carbon each year, both the planet and the American economy stand to benefit from a large-scale domestic advanced biofuels industry. Produced from the microbial fermentation of sugars in lignocellulosic biomass, advanced biofuels are clean, green and renewable, and could displace gasoline, diesel and jet fuel on a gallon-for-gallon basis and be directly dropped into today’s engines and infrastructures.

The sugars in lignocellulosic biomass, however, are complex polysaccharides that are deeply embedded within a very recalcitrant material called lignin. To break apart the complex lignocellulose and help hydrolyze the released polysaccharides into sugars that can be fermented by microbes, researchers at JBEI and elsewhere have been studying biomass pretreatments with ionic liquids – environmentally benign organic salts often used as green chemistry substitutes for volatile organic solvents.

Researchers at INL have been investigating ways to increase the energy densities of biomass feedstocks and make delivery to refineries much more economical. Milling feedstocks into flour or pellets is an effective process for large-scale energy densification, but before this latest study it was unknown as to how densification of single or mixed feedstocks would impact ionic liquid pretreatment and sugar yield. 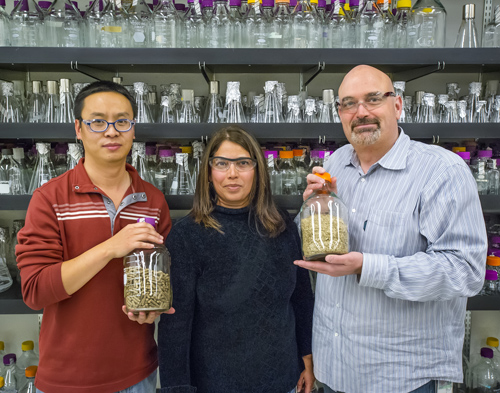 The JBEI/INL collaboration mixed switchgrass, lodgepole pine, corn stover and eucalyptus in flour and pellets and within 24 hours of saccharification were able to obtain sugar yields of up to 90-percent for both forms. Pellets, because of their higher energy density, would be the preferred form.

“Our work is the first demonstration that ionic liquid pretreatments can effectively handle mixed and densified feedstocks,” Simmons says. “We’re continuing the collaboration to next identify the most economical pelletized feedstock mixtures based on targeted regions of the United States. We’’ then determine how efficiently our process can convert these mixtures into fermentable sugars.”

The collaboration has published their results in the journal Biofuels in a paper titled “Impact of mixed feedstocks and feedstock densification on ionic liquid pretreatment efficiency.” Co-authors, in addition to Simmons and Singh, were JBEI’s Jian Shi and Vitalie Stavila, and INL’s Vicki Thompson and Neal Yancey.