COLUMBIA, Mo. ­— Each year, about 610,000 Americans suffer their first heart attack, according to the Centers for Disease Control and Prevention. Heart attacks and other symptoms of cardiovascular disease can be caused when blockage occurs in the arteries. In a new study from the University of Missouri, a scientist has discovered a natural defense against arterial blockage: bilirubin.

Bilirubin is typically something parents of newborns hear about when their children are diagnosed with jaundice. Generated during the body’s process to recycle worn-out red blood cells, bilirubin is metabolized by the liver and, usually, leaves the body harmlessly. (Many babies’ livers are not developed enough to metabolize the bilirubin, which results in the infants being diagnosed with jaundice, or high levels of bilirubin in their systems.) Now, MU scientists have found that bilirubin can be used to inhibit the clogging of arteries, and thus prevent the deadly consequences often experienced by individuals with cardiovascular disease.

“Bilirubin is generated daily in the human body, but it’s not a waste product; it has important functions, including being an antioxidant,” said William Durante, professor of medical pharmacology and physiology and lead author on the study. “What we found in our study is that bilirubin can prevent or limit the damage that occurs to blood vessels in individuals who have, or are at risk for, cardiovascular diseases such as atherosclerosis.”

When arteries are damaged, smooth muscle cells in blood vessels become activated and grow at the injury sites creating lesions inside the arteries. These lesions can block the flow of blood in arteries of the heart leading to chest pains or deadly heart attacks, Durante said. Arterial lesions can occur due to genetics or because of bad lifestyle choices such as a lack of exercise, unhealthy diet or smoking. 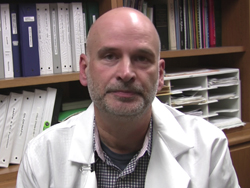 William Durante. Durante, a professor of medical pharmacology and physiology, has found that bilirubin can be used to inhibit the clogging of arteries often experienced by individuals with cardiovascular disease. Image credit: University of Missouri

“We found that bilirubin could limit the size of arterial lesions by blocking the growth of vascular smooth muscle cells,” Durante said. “Importantly, bilirubin inhibits cell growth without causing cell death, an undesirable side effect of drugs. Cell death creates cellular debris in the arterial network and leads to inflammation and possible rupture of the lesions resulting in even bigger clinical problems.”

However, Durante said that bilirubin is a challenge to use because it is not easily dissolved in water and is rapidly metabolized by the liver when taken orally.

“One possibility is to coat stents — which doctors insert into arteries to keep blood vessels open once the blockage has been cleared — with the bilirubin,” Durante said. “When the stents are inserted into the arteries, bilirubin will keep smooth muscle cells from growing and blocking the stent. Surgeons also could coat bilirubin onto blood vessels that are used in bypass surgery.”

Durante said that further studies are needed before this technique can be tested in humans. Durante’s study was published in Frontiers in Pharmacology. The early-stage results of this research are promising. If additional studies, including animal studies, are successful within the next few years, MU officials would request authority from the federal government to begin human drug development (this is commonly referred to as the “investigative new drug” status). After this status has been granted, researchers may conduct human clinical trials with the hope of developing new treatments.