*A $2-million award from DOE will help bring down the cost of next-generation fuel cells.*

Fuel cells seem like an ideal energy source—they’re clean, efficient, silent and don’t require transmission lines. The hitch? They can be costly. Now scientists at Lawrence Berkeley National Laboratory (Berkeley Lab) hope to change that equation by building a sophisticated cost model that will take into account the total cost of ownership.

With a $2-million grant from the U.S. Department of Energy, a team of scientists led by Eric Masanet will perform a detailed assessment of fuel cell design and manufacturing that takes into account both intrinsic and external benefits. The aim is to quantify not only traditional manufacturing costs but also benefits that may previously have been overlooked and may ultimately bring down the cost of fuel cells. 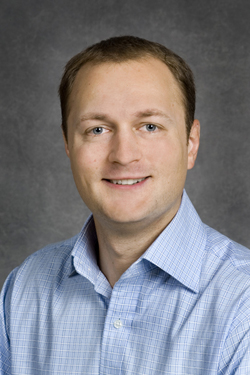 “There are, for example, human health benefits associated with fuel cells replacing fossil fuels, but they are traditionally not accounted for, especially not by the company making the fuel cells,” said Masanet of the Lab’s Environmental Energy Technologies Division. “But they are a benefit that society enjoys. So we will be using modeling techniques we’ve developed to see if there are optimal design and manufacturing strategies for different markets.”

The result will be not just a static cost analysis but a powerful public tool that can be used by designers, manufacturers and building owners as they make decisions around producing and implementing fuel cells. The tool will be based on a software platform called Analytica that Masanet likens to a visual spreadsheet. Because it is modular it will allow the user to easily change inputs, such as design and manufacturing costs and energy sources, and replace parts of the process. “Something like this will have a shelf life,” he said. “We’ll deliver a tool that can be updated over time with new processes, new designs, new cost data.”

The project will cover two types of fuel cells—solid oxide and proton-exchange-membrane fuel cells—in systems of up to 250 kilowatts. While vehicles are a common application for fuel cells, there is great demand for stationary applications such as primary and backup power for commercial and residential buildings. This project will look at several specific stationary markets, including backup power, baseload power and combined heat and power, as well as forklifts. Success with forklifts could lead to bigger transportation markets.

Another part of the cost equation normally not considered by manufacturers is that fuel cells can often be used to heat hot water in a building, which could save building owners on expenses such as hot water heaters and natural gas use. “Our model will give an idea of the big picture savings, and whether there are incentives that can be provided to make sure the savings are captured,” said Masanet. “Maybe building owners might be willing to accept a higher price if there are other advantages that manufacturers and policy makers can quantify. And when it comes to health benefits, policy makers can often provide incentives to accelerate technology adoption if they can quantify the greater benefits to society.”

Masanet and his team—including Berkeley Lab scientists Jim McMahon, Adam Weber, Chris Marnay and Max Wei—will also consider geographic factors. For example, are the benefits of fuel cells the same in Washington state, which gets much of its power from hydroelectricity, as in West Virginia, which is dominated by coal? “The cost benefits and pollution benefits might differ depending on where it’s deployed,” Masanet said. “There might be places where it’s more or less cost effective depending on external benefits.”

Ballard Power Systems, a major fuel cell manufacturer, and two groups at the University of California Berkeley—the Laboratory for Manufacturing and Sustainability and the Transportation Sustainability Research Center—are subcontractors on the project. “With Ballard on board we can make a pretty robust and more accurate model of how fuel cells are manufactured,” Masanet said. “We’ll work with their engineers, visit their facilities, and they’ll tell us if we’re modeling these processes in a realistic way.”

The project is expected to last five years. A working tool should be available in three years, and Berkeley Lab scientists will continue to update the model for another two years. The analytical tools and techniques used in this project were largely developed over the past year in a project for Berkeley Lab’s Carbon Cycle 2.0 initiative.