Laminin, long thought to be only a structural support protein in the microenvironment of breast and other epithelial tissue, is “famous” for its cross-like shape. However, laminin is far more than just a support player with a “pretty face.” Two studies led by one of the world’s foremost breast cancer scientists have shown how laminin plays a central role in the development of breast cancer, the second most leading cause of cancer death among women in the United States. In one study it was shown how laminin influences the genetic  information inside a cell’s nucleus. In the other study it was shown how destruction of laminin can play a detrimental role in the early stages of tumor development.

Mina Bissell holds the title of “Distinguished Scientist” with the U.S. Department of Energy (DOE)’s Lawrence Berkeley National Laboratory (Berkeley Lab). She herself is  famous for having discovered the critical role in breast cancer development played by the extracellular matrix (ECM), the network of fibrous and globular proteins surrounding a breast cell. Her “dynamic reciprocity” theory holds that the fate of cells – whether they stay healthy or become cancerous – hinges on the chemical signals exchanged between the ECM and a cell’s nucleus. In these latest studies, Bissell and her collaborators focused on laminin and its connections with two other proteins – actin, a cytoplasmic protein that has been linked to nuclear activities; and MMP9, an enzyme that is secreted outside the cells and is known to break down ECM constituents. 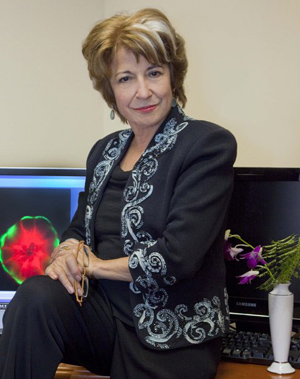 “Quiescence” is the process by which a biological cell stops growing or dividing. This is the opposite of a cancerous state, in which cell growth and division is often unchecked. Signals from laminin-111, an ECM protein that helps the cell and its ECM stick together, have been linked to cell quiescence but the mechanism was unknown. Bissell and postdoctoral fellow, Virginia Spencer, in Berkeley Lab’s Life Sciences Division, have now shown that the addition of laminin-111 leads to quiescence in breast epithelial cells through changes in nuclear actin.

“We found that high levels of laminin-111 depleted nuclear actin and this in turn induced cell quiescence,” Bissell says. “Furthermore, this process can be prevented if a form of actin that can not exit the nucleus is introduced. Under these conditions the cells do not stop growing even in the presence of laminin.”

In their study, Bissell and Spencer and their colleagues used a unique three-dimensional cell culture assay developed by Bissell’s research group, and worked with mouse and human mammary epithelial cells. Through the addition of laminin-111, they were able to decrease nuclear actin levels in the cultured cells, which reduced DNA synthesis and transcription. When nuclear actin levels were deliberately over-expressed, the effects were reversed and cells were prevented from becoming quiescent even in the presence of laminin-111. Furthermore, the high levels of nuclear actin were concentrated in regions of the breast cells where there was little or no laminin-111. Taken together, the results implicate laminin-111 as the regulator of nuclear actin and nuclear actin as a key mediator of epithelial cell quiescence.

“In collaboration with Ole Petersen’s laboratory, we had found previously that the ECM surrounding tissues from breast cancers has a dramatic reduction in laminin-111 in comparison to the ECM surrounding a normal breast cell, which is rich in laminin-111,” Bissell says. “However, just giving laminin back to cancer cells was not enough to make them normal so other factors are clearly also involved and one such factor we now know is how laminin-111 and nuclear actin talk to each other!”

Says Spencer, “Ours is the first study to actually identify laminin-111 as the physiological regulator of nuclear actin and to implicate the loss of nuclear actin as a key step in  reaching quiescence and homeostasis in the mammary gland in vivo and in culture.”

Spencer believes that the interaction between laminin-111 and nuclear actin could provide a new target for diagnostic therapeutic efforts, but this will require further study.

“While it remains to be determined whether dysregulation of the levels or organization of nuclear actin is responsible for the inability of malignant cells to respond to growth-inhibitory signals from laminin-111, our preliminary results point in this direction,” she says. “In addition, the findings that laminin-111 expression is lost in myoepithelial cells isolated from human tumors should place the interaction of laminin-111 and breast tumor cells at the forefront of future investigations.”

A paper detailing the results of this study appears in the Journal of Cell Science. The paper is titled “Depletion of nuclear actin is a key mediator of quiescence in epithelial cells.” Co-authoring the paper with Bissell and Spencer were Sylvain Costes, Jamie Inman, Ren Xu, James Chen and  Michael Hendzel. 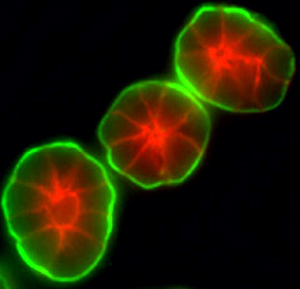 A 3D cell culture assay developed by Mina Bissell and her research group enables breast cells to reproduce actual structural units, an advantage that was essential for understanding the role of laminin in breast cancer development. Image from Bissell group.

In the second study, which was related to the role of laminin-111 in cell quiescence, Bissell and another group of collaborators examined laminin-111 in the context of matrix metalloproteinase-9 (MMP9), a zinc-dependent enzyme that plays a huge role in tissue function by virtue of its ability to cleave or degrade many of the ECM constituent proteins, including laminin-111.

“Organization into polarized three-dimensional tissue structures defines whether epithelial cells are normal or malignant,” Bissell says. “We have shown that when MMP9 degrades laminin-111 in the ECM, the tissue architecture of breast cells becomes lost and cell proliferation is initiated. This is the first demonstration of how the degradation of laminin-111 by MMP9 in a physiological context contributes to tumor progression.”

A paper detailing the results of this study has appeared in the journal Genes and Development. The paper is titled “Raf-induced MMP9 Disrupts Tissue Architecture of Human Breast Cells in Three-Dimensional Culture and is Necessary for Tumor Growth in vivo.” Co-authoring the paper with Bissell were Alain Beliveau, Joni Mott, Alvin Lo, Emily Chen, Antonius Koller, Paul Yaswen and John Muschler.

Using a model of human breast cancer where breast epithelial cells were grown in three-dimensional cultures of basement membrane, a thin layer of ECM material that envelops breast and other glandular tissue, Bissell and her co-authors found that not only did excessive MMP9 activity disrupt tissue architecture, but that silencing MMP9 restored tissue architecture and decreased the ability of human beast cancer cells to form tumors in mice.

“We found that in all conditions where tumor cells could be reverted to a normal phenotype in our 3D assays, a novel signaling loop through a pathway of Raf/MEK/ERK proteins was responsible for MMP9 activity in the breast tumor cells,” says co-author Joni Mott, a researcher with Bissell’s group in Berkeley Lab’s Life Sciences Division. “Once MMP9 was activated, the proteinase targeted the destruction of laminin-111 within the basement membrane.”

Laminin-111 in the basement membrane, Mott explains, allows mammary epithelial cells to establish a normal polarized structural unit called an “acinus,” which is responsible for storing milk and making it available for babies when they suckle.

In their Genes and Development paper, Bissell, Mott and their co-authors reported that when the integrity of the tissue architecture was compromised by laminin proteolysis, the basement membrane no longer provided the appropriate signals to restrain epithelial cell proliferation. The result was a sustained signaling of the Raf/MEK/ERK pathway that leads to continued MMP9 production and further disruption of tissue architecture and loss of cell growth control.

“This work is particularly poignant because it provides potential new therapeutic targets for controlling breast cancer and revitalizes the possibility of targeting MMPs in cancer therapy,” Bissell says. “New information on how MMP9 and other MMPs truly function may provide highly targeted and effective therapeutic strategies to control MMP activity in cancer, and may soon lead to the development of novel cancer treatments.”