Ting Xu, a polymer scientist with Berkeley Lab’s Materials Sciences Division, led a study in which supramolecules based on block copolymers were combined with gold nanoparticles to create nanocomposites that under solvent annealing quickly self-assembled into hierarchically-structured thin films spanning an area of several square centimeters. The technique is compatible with current nanomanufacturing processes and has the potential to generate new families of optical coatings for applications in a wide number of areas including solar energy, nanoelectronics and computer memory storage. This technique could even open new avenues to the fabrication of metamaterials, artificial nanoconstructs that possess remarkable optical properties.

“Our technique can rapidly generate amazing nanoparticle assemblies over areas as large as a silicon wafer,” says Xu, who also holds a joint appointment with the University of California (UC) Berkeley’s Departments of Materials Sciences and Engineering, and Chemistry. “You can think of it as pancake batter that you can spread over a griddle, wait one minute and you have a pancake ready to eat.” 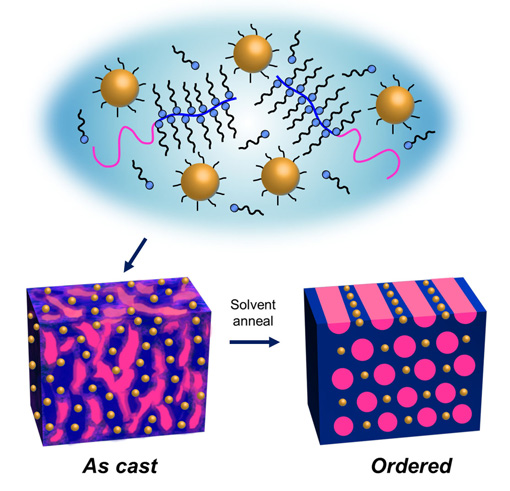 Upon solvent annealing, supramolecules made from gold nanoparticles and block copolymers will self-assemble into highly ordered thin films in one minute. Image credit: Berkeley Lab

Nanoparticles function as artificial atoms with unique optical, electrical and mechanical properties. If nanoparticles can be induced to self-assemble into complex structures and hierarchical patterns, similar to what nature does with proteins, it would enable mass-production of devices a thousand times smaller those used in today’s microtechnology.

Xu and her research group have been steadily advancing towards this ultimate goal. Most recently their focus has been on the use of block copolymer-based supramolecular solutions to direct the self-assembly of nanoparticle arrays. A supramolecule is a group of molecules that act as a single molecule able to perform a specific set of functions. Block copolymers are long sequences or “blocks” of one type of monomer bound to blocks of another type of monomer that have an innate ability to self-assemble into well-defined arrays of nano-sized structures over macroscopic distances. 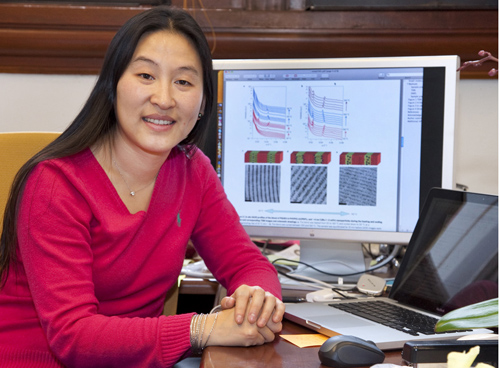 In the supramolecular technique devised by Xu and her colleagues, arrays of gold nanoparticles were incorporated into solutions of supramolecules to form films that were about 200 nanometers thick. Through solvent annealing, using chloroform as the solvent, the nanoparticle arrays organized into three-dimensional cylindrical microdomains that were packed into distorted hexagonal lattices in parallel orientation with the surface. This display of hierarchical structural control in nanoparticle self-assembly was impressive but was only half the game.

“To be compatible with nanomanufacturing processes, the self-assembly fabrication process must also be completed within a few minutes to minimize any degradation of nanoparticle properties caused by exposure to the processing environment,” Xu says.

She and her group systematically analyzed the thermodynamics and kinetics of self-assembly in their supramolecular nanocomposite thin films upon exposure to solvent vapor. They found that by optimizing a single parameter, the amount of solvent, assembly kinetics could be precisely tailored to produce hierarchically structured thin films in a single minute. 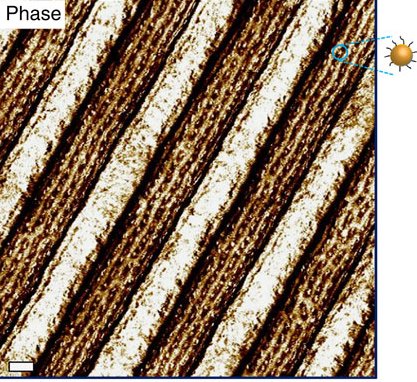 “By constructing our block copolymer-based supramolecules from small molecules non-covalently attached to polymer side chains, we changed the energy landscape so that solvent content became the most important factor,” Xu says. “This enabled us to achieve fast-ordering of the nanoparticle arrays with the addition of only a very small amount of solvent, about 30-percent of the fraction of a 200 nanometer thick film.”

The optical properties of nanocomposite thin films depend on the properties of individual nanoparticles and on well-defined inter-particle distances along different directions. Given that the dimensions of the gold nanoparticle arrays are at least one order of magnitude smaller than the wavelengths of visible light, the supramolecular technique of Xu and her colleagues has strong potential to be used for making metamaterials. These artificial materials have garnered a lot of attention in recent years because their electromagnetic properties are unattainable in natural materials. For example, a metamaterial can have a negative index of refraction, the ability to bend light backwards, unlike all materials found in nature, which bend light forward.

“Our gold nanocomposite thin films exhibit strong wavelength- dependent optical anisotropy that can be tailored simply by varying the solvent treatment,” Xu says. “This presents a viable alternative to lithography for making metamaterials.” 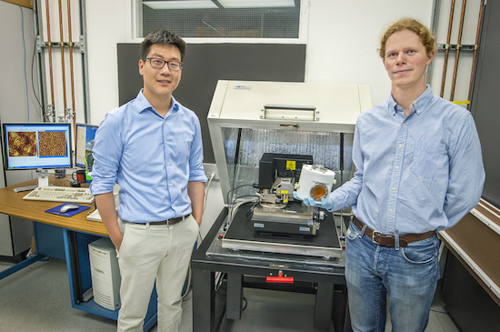 While Xu and her colleagues used gold nanoparticles in their films, the supramolecular approach is compatible with nanoparticles of other chemical compositions as well.

“We should be able to create a library of nanoparticle assemblies engineered for light manipulation and other properties,” Xu says, “using a technique that is compatible with today’s most widely used nanomanufacturing processes, including blade coating, ink-jet printing and dynamic zone annealing.”

For more information on the research of Ting Xu go here