Washington, D.C. – As part of a broad effort to achieve breakthrough innovations in energy production, U.S. Deputy Secretary of Energy Daniel Poneman announced, on July 22, an award of up to $122 million over five years to a multidisciplinary team of top scientists to establish an Energy Innovation Hub aimed at developing revolutionary methods to generate fuels directly from sunlight.

The Joint Center for Artificial Photosynthesis (JCAP), to be led by the California Institute of Technology (Cal Tech) in partnership with the U.S. Department of Energy’s Lawrence Berkeley National Laboratory (Berkeley Lab), will bring together leading researchers in an ambitious effort aimed at simulating nature’s photosynthetic apparatus for practical energy production.  The goal of the Hub is to develop an integrated solar energy-to-chemical fuel conversion system and move this system from the bench-top discovery phase to a scale where it can be commercialized.

“The Energy Innovation Hubs have enormous potential to advance transformative breakthroughs,” said Deputy Secretary Poneman. “Finding a cost-effective way to produce fuels as plants do — combining sunlight, water, and carbon dioxide — would be a game changer,  reducing our dependence on oil and enhancing energy security.  This Energy Innovation Hub will enable our scientists to combine their talents to tackle this bold and highly promising challenge.”

Senator Feinstein said, “I’m very proud that California has been on the cutting-edge of the clean energy movement. With this award, some of California’s top scientists will continue to lead the way forward by working together to create ‘artificial photosynthesis,’ a process that can emulate the inner workings of plant life to produce a useful transportation fuel we can put right into our cars without further processing.  If successful, this concept – to combine sunlight, water and carbon dioxide to produce a clean fuel – would revolutionize the energy sector. It would help scrub the atmosphere of excessive carbon dioxide, help eliminate our dependence on oil, and generate an innovative industry in the heart of California. This is very exciting.”

Senator Boxer said, “I am so pleased that this California consortium will receive this investment in clean fuels research, which has the potential to reduce our dangerous dependence on foreign oil, increase our national security and create jobs in California.”

The Fuels from Sunlight Energy Innovation Hub is one of three Hubs that will receive funding in FY10.  In May, the Department announced that a team led by Oak Ridge National Laboratory will establish a Hub on modeling and simulation for nuclear reactors.  The selection for the remaining Hub will be announced over the coming months. The Hubs are large, multidisciplinary, highly-collaborative teams of scientists and engineers working over a longer time frame to achieve a specific high-priority goal.  They will be managed by top teams of scientists and engineers with enough resources and authority to move quickly in response to new developments. 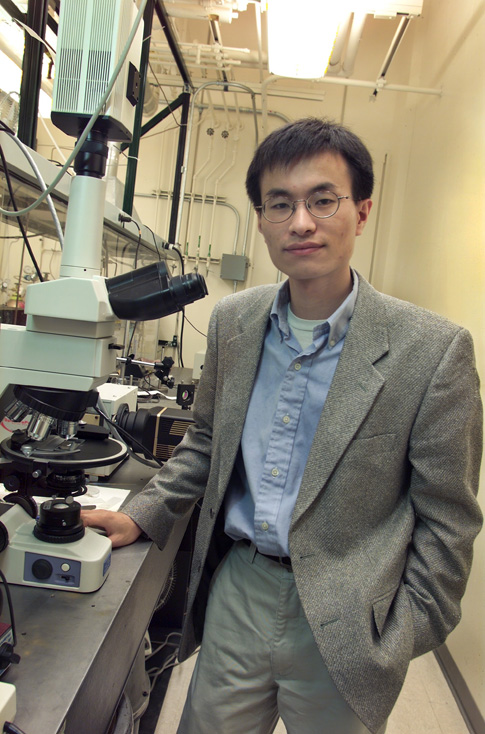 About the image above: Peidong Yang, a chemist with Berkeley Lab and UC Berkeley, will lead the Berkeley component of the Joint Center for Artificial Photosynthesis, a new Energy Innovation Hub created by the U.S. Department of Energy. Image credit: Photo by Roy Kaltschmidt, Berkeley Lab Public Affairs.

JCAP research will be directed at the discovery of the functional components necessary to assemble a complete artificial photosynthetic system:  light absorbers, catalysts, molecular linkers, and separation membranes.  The Hub will then integrate those components into an operational solar fuel system and develop scale-up strategies to move from the laboratory toward commercial viability.  The objective is to drive the field of solar fuels from fundamental research, where it has resided for decades, into applied research and technology development, thereby setting the stage for the creation of a direct solar fuels industry.

In response to the announcement, Berkeley Lab director Paul Alivisatos, an authority on nanocrystals for solar energy applications and founder of the Helios: Solar Energy Research Center, said, “In order to replace fossil fuels, we need to get a lot more proficient at harvesting sunlight and converting it into forms of energy that can be used for transportation and other human needs. Nature provides a model solution to this problem through photosynthesis. We want to emulate this process but do it with artificial materials that could be much more efficient and use much less land. The ultimate goal would be to deploy an artificial photosynthetic system across a large geographical area, at a level of efficiency that could provide the United States with a significant alternative fuel source.”

The Hub will be directed by Nathan S. Lewis, George L. Argyros Professor and Professor of Chemistry at Cal Tech.  Other members of the Hub leadership team include Cal Tech’s Harry Atwater and Bruce Brunschwig, and Peidong Yang, a chemist who holds joint appointments with Berkeley Lab’s Materials Sciences Division, and the University of California Berkeley’s Chemistry Department and Department of Materials Science and Engineering.

Said Yang, a leading authority on semiconductor nanowires which could play a prominent role in future solar cells, “This is a really the opportunity of a lifetime for to tackle such an important energy problem that will have tremendous impact in the future of our society. We will certainly have many scientific and technological challenges ahead of us, but with focused research efforts from our very talented team, we will find the ultimate solution for the solar to fuels technology.”

The selection process for the Fuels from Sunlight Hub was managed by the Department of Energy Office of Science, which will have federal oversight responsibilities for the artificial photosynthesis Hub. Selection was based on a competitive process using scientific peer review.The Hub will be funded at up to $22 million this fiscal year.  The Hub will then be funded at an estimated $25 million per year for the next four years, subject to Congressional appropriations.