How’s this for innovative: A Berkeley Lab-led team hopes to engineer a new enzyme that efficiently converts methane to liquid transportation fuel.

“There’s a lot of methane available, and we want to develop a new way to harness it as an energy source for vehicles,” says Christer Jansson, a biochemist in Berkeley Lab’s Earth Sciences Division who heads the effort.

Methane is the main component of natural gas and biogas from wastewater treatments and landfills. Another source is “stranded natural gas,” which is currently flared or vented at remote oil fields, and which represents an enormous unused energy resource.

But methane has disadvantages. It remains a gas at surface temperatures and pressure, which makes it problematic and costly to transport. Large portions of the known natural gas reserves are located in remote areas of the world. And methane is a potent greenhouse gas, with a global warming potential more than 20 times that of carbon dioxide.

Methane can be converted to liquid hydrocarbons by thermochemical processes. But these processes are both energy intensive and often non-selective. 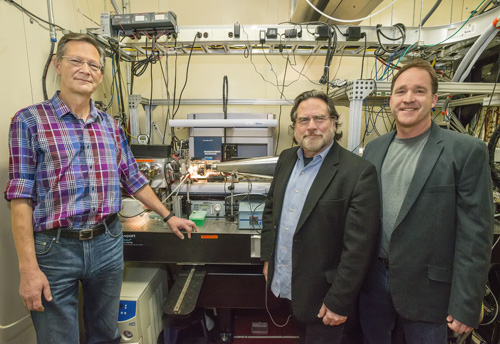 So Jansson and colleagues are turning to biology. There are bacteria in nature that gobble up methane and convert it to chemicals that can be fashioned into fuel. These bacteria, called methanotrophs, have an enzyme that serves their needs just fine. Unfortunately, the enzyme doesn’t produce chemicals with the efficiency needed to make transportation fuels.

Scientists are working to make this enzyme more efficient, but Jansson’s team is taking a new approach. They’re starting with a different enzyme that ordinarily takes in carbon dioxide. Its structure is relatively simple and well understood, making it an ideal platform to tinker with, which in this case means engineering the enzyme to consume methane instead of carbon dioxide and release a product that can feed into a pathway for fuel synthesis.

This new enzyme, a methylase, could be added to bacteria for production of different fuels such as butanol and biodiesel. In practice, these specially designed bacteria would be placed in a bioreactor. Simply add methane—and out comes liquid transportation fuel. Repeat the cycle over and over for more fuel.

That’s the idea. Getting there will require a team of Berkeley Lab scientists and industrial partners.

John Tainer’s and Steve Yannone’s groups in Berkeley Lab’s Life Sciences Division will explore how the enzyme can be tweaked so that it binds with methane. They’ll use computational analysis to map the structural changes needed so that the enzyme has a shot at breaking methane’s bonds and snaring the molecule. They’ll also study the enzyme at Berkeley Lab’s Advanced Light Source, where the SIBYLS synchrotron beamline combines X-ray scattering with X-ray diffraction capabilities. This will help the scientists determine the enzyme’s functional 3-D structure.

In addition, Novici Biotech, a California-based industrial partner, will create tens of thousands of variants of the enzyme with its proprietary synthetic biology technology. Romy Chakraborty of Berkeley Lab’s Earth Sciences Division and scientists from the U.S. Department of Energy’s Joint BioEnergy Institute will assist in analyzing these variants to identify those with the best characteristics.

Ideally, each step will circle closer to a new enzyme that’s very efficient at converting methane to an oxidized product.

“Once a functional methylase has been constructed, we need to engineer a new metabolic cycle that takes up methane and regenerates the co-substrate,” says Jansson. “Just like the Calvin-Benson cycle, but with assimilation of methane instead of carbon dioxide.”

“This will take some time,” Jansson says. “But if we’re successful, the methylase can be installed into various microorganisms such as E. coli, yeast, and cyanobacteria and used on a large scale to produce liquid fuel from methane in natural gas or other sources.”

Two other industrial partners, Kiverdi, Inc. and Microvi Biotechnologies, are also involved in the project to optimize gas bioprocessing and other culture conditions for growing the engineered cells. Kiverdi is also heading the business analysis and tech transfer part of the project with Berkeley Lab business specialists Andrea Schoeller and Bill Shelander.