For years, scientists have had an itch they couldn’t scratch. Even with the best microscopes and spectrometers, it’s been difficult to study and identify molecules at the so-called mesoscale, a region of matter that ranges from 10 to 1000 nanometers in size. Now, with the help of broadband infrared light from the Advanced Light Source (ALS) synchrotron at the U.S. Department of Energy’s Lawrence Berkeley National Laboratory (Berkeley Lab), researchers have developed a broadband imaging technique that looks inside this realm with unprecedented sensitivity and range.

By combining atomic force microscopy with infrared synchrotron light, researchers from Berkeley Lab and the University of Colorado have improved the spatial resolution of infrared spectroscopy by orders of magnitude, while simultaneously covering its full spectroscopic range, enabling the investigation of variety of nanoscale, mesoscale, and surface phenomena that were previously difficult to study.

“The big thing is that we’re getting full broadband infrared spectroscopy at 100 to 1000 times smaller scale,” says Hans Bechtel, principal scientific engineering associate at Berkeley Lab. “This is not an incremental achievement. It’s really revolutionary.” 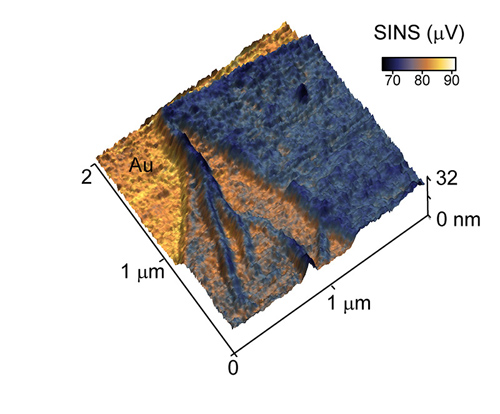 This peptoid nanosheet, produced by Gloria Olivier and Ron Zuckerman at Berkeley Lab, is less than 8 nanometers thick at points. SINS makes it possible to acquire spectroscopic images of these ultra-thin nanosheets for the first time. Image credit: Berkeley Lab

In a Proceedings of the National Academy of Sciences paper published May 6 online, titled “Ultra-broadband infrared nano-spectroscopic imaging,” Berkeley Lab’s Bechtel and Michael Martin, a Berkeley Lab staff scientist, and colleagues from Markus Raschke’s group at the University of Colorado at Boulder describe SINS. They demonstrate the nanoscope’s ability to capture broadband spectroscopic data over a variety of samples, including a semiconductor-insulator system, a mollusk shell, proteins, and a peptoid nanosheet. Martin says these demonstrations just “scratch the surface” of the potential of the new technique.

The new approach overcomes long-standing barriers with pre-existing microscopy techniques that often involve demanding technical and sample preparation requirements. Infrared spectroscopy uses low-energy light, is minimally invasive, and is applicable under ambient conditions, making it an excellent tool for chemical and molecular identifications in systems that are static as well as those that are living and dynamic. The technique works by shining low-energy infrared light onto a molecular sample. Molecules can be thought of as systems of balls (atoms) and springs (bonds between atoms) that vibrate with characteristic wiggles; they absorb infrared radiation at frequencies that correspond to their natural vibrating modes. The output from this absorption is a spectrum, often called a fingerprint, which shows distinctive peaks and dips, depending on the bonds and atoms present in the sample.

But infrared spectroscopy has its challenges too. While it works well for bulk samples, traditional infrared spectroscopy can’t resolve molecular composition below about 2000 nanometers. The major hurdle is the diffraction limit of light, which is the fundamental barrier that determines the smallest focus spot of light and is particularly troublesome for the large wavelengths of infrared light. In recent years, though, the diffraction limit has been overcome by a technique called scattering-scanning near-field optical microscopy, or s-SNOM, which involves shining light onto a metallic tip. The tip acts as an antenna for the light, directing it to a tiny region at its apex just tens of nanometers wide. 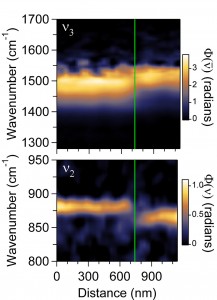 A spectral-linescan of a blue mussel shell, which transitions from calcite to aragonite, illustrates the spatial resolution and spectroscopic range capabilities of the SINS technique. The image shows two simultaneously acquired vibrational modes across the transition region. Image credit: Berkeley Lab (Click image to enlarge)

This trick is what’s used in IR s-SNOM, where infrared light is coupled to a metallic tip. The challenge with IR s-SNOM, however, is that researchers have been relying on infrared light produced by lasers. Lasers emit a large number of photons needed for the technique, but because they operate in a narrow wavelength band, they can only probe a narrow range of molecular vibrations. In other words, laser light simply can’t give you the flexibility to explore a spectrum of mixed molecules.

Bechtel, Martin and Raschke’s team saw the opportunity to use Berkeley Lab’s ALS to overcome the laser limitation. The lab’s synchrotron produces broadband infrared light with a high-photon count that can be focused to the diffraction limit. The researchers coupled the synchrotron light to a metallic tip with an apex of about 20 nanometers, focusing the infrared beam onto the samples. The resulting spectrum is analyzed with a modified FTIR instrument.

“This is actually one of very few examples where synchrotron light has been coupled to scanning probe microscopy,” says Raschke. “Moreover, the implementation of the technique at the synchrotron brings chemical nano-spectroscopy and -imaging out of the lab of a few laser science experts and makes it available for a broader scientific community at a user facility.”

From mollusks to moon rocks

The team demonstrated the technique by confirming the spectroscopic signature of silicon dioxide on silicon and by illustrating the sharp chemical transition that occurs within the shells of the blue mussel (M. edulis). Additionally, the researchers looked at proteins and a peptoid nanosheet, an engineered, ultra-thin film of proteins with medical and pharmacological applications.

Martin is excited for the potential of SINS, which is available for researchers from any institution to use. In particular he’s interested in a closer look at battery systems, with the hope that understanding battery chemistry on the mesoscale could provide insight into better performance. Further out, he expects SINS to be useful for a range of biochemistry as well. “This hints at a dream I’ve had in my mind, to look at the surface of a cell, inside the bi-layer membrane, the channels, and receptors,” says Martin. “If we could put a SINS tip on a living cell, we could watch biochemistry happen in real time.” 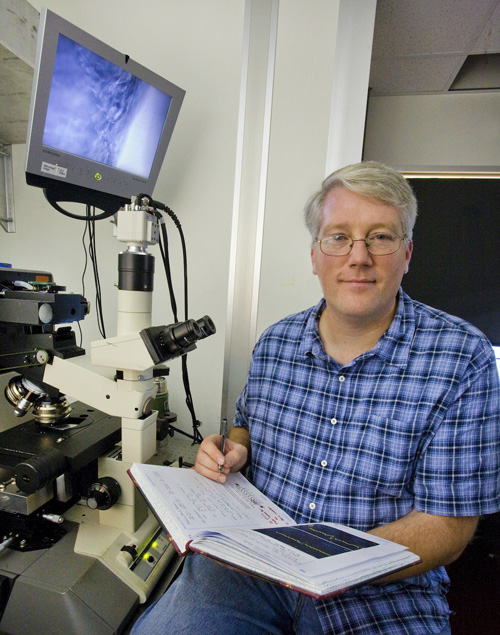 Bechtel, for his part, is intrigued by the possibility of using SINS for the study of lunar rocks, meteorites and stardust. These extraterrestrial materials have a molecular diversity that is difficult to resolve on the nanoscale, particularly in a non-destructive manner for these rare samples. A better understanding of the makeup of moon rocks and dust from space could provide clues to the formation of the planets and solar system.

Raschke is using the technique to study the processes that limit the performance of organic solar cells. He is looking to further improve the flexibility of the technique such that it can be applied under variable and controlled atmospheric and low-temperature conditions. Among other tweaks, he plans to increase the sensitivity of the technique with the ultimate goal of performing singe-molecule chemical spectroscopy.