No matter their size or shape, explosive volcanoes produce tremors at similar frequencies for minutes, days or weeks before they erupt. In the Feb. 24 issue of the journal Nature, researchers at Yale University and the University of British Columbia describe a model that explains this strange phenomenon — and may help forecast deadly eruptions.

When such volcanoes erupt they can shoot hot ash up to 40 kilometers into the atmosphere and cause devastating destruction when the ash column collapses and spreads as “pyroclastic flows”. Prior to most of these explosive eruptions the volcanoes shake slightly but measurably, and the shaking becomes more dramatic during the eruption itself.  This tremor is one of the primary precursors and warnings used by volcanologists for forecasting an eruption.

“Tremor is very mysterious, most notably because it shakes at pretty much the same frequency in almost every explosive volcano, whether it’s in Alaska, the Caribbean, New Zealand, or Central America,” said David Bercovici, Professor and Chair of the department of Geology and Geophysics at Yale, and co-author of the research.  “That it’s so universal is very weird because volcanoes are so different in size and character.   It would be like blowing on 5 different musical wind instruments and they all sounded the same.” 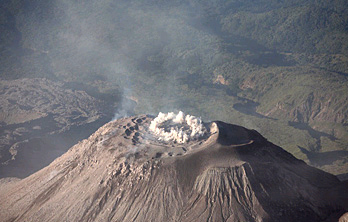 Gas/foam that surround magma escapes from the Santiaguito Volcano in Guatemala in 2010. Interactions of this ring of gas bubbles and magma seem to explain why tremors shake at the same frequency in all explosive volcanoes. Image credit: Yale University

For minutes to weeks before eruptions, tremors in nearly all volcanoes stay in a narrow band of frequencies from about 0.5 to 2 HZ.  Just before and during the eruption, the frequency climbs to a higher pitch, and the range spreads out to between 0.5 and 7 HZ.   This similarity in tremors has been hard to explain because each volcano differs in many variables such as physical structure, magma composition or gas content.

The mathematical model developed by Bercovici and his colleague Mark Jellinek at UBC suggests these similarities can be explained by “magma wagging” — or the rattling that occurs from the interaction of rising magma and the foamy jacket of gas that surrounds it.  The factors that control this rattling or wagging vary little between volcanoes, which explain why the same tremors occur in very different volcanoes.

“Explosive eruptions are some of the most spectacular and destructive phenomena in nature, and tremor is both a warning of the event and a vital clue about what is going on in the belly of the beast,” Bercovici said. “This model will provide a much needed framework for understanding the physics of tremors, and this can only help with the prediction and forecasting of destructive eruptions.”

The work was funded by the National Science Foundation and the Canadian Institute for Advanced Research.