Developmental Genes Have More Than One Way to Stop

EAST LANSING, Mich. — There’s more than one way to silence gene activity, according to a Michigan State University researcher.

Downregulating activity is how healthy genes should shift out of their development cycle. The results, published in this week’s Current Biology, discuss how specific repressor proteins – which researchers have named Hairy and Knirps – slow genes during development and how the process is comparable to slowing down a car, says molecular biologist David Arnosti.

The binding of repressor proteins to DNA provides a molecular switch for such regulation. Although the two types of protein have been identified as silencers of gene expression, each one uses a distinct molecular mechanism to halt the process, said Arnosti, director of MSU’s Gene Expression in Disease Development initiative.

These mechanisms may hold the keys to explaining how diseases, such as cancer, diabetes and arthritis can be traced to genes that are unable to shift gears properly and can’t stop, Arnosti said.

“In automotive terms, a driver can either brake or downshift the transmission to achieve the same result,” said Arnosti, who published the paper with Li M. Li, a former MSU doctoral student now working at the University of California, Berkeley. “Similarly, short-range and long-range repressor proteins both interfere with the basic gene expression machinery, but in different ways.” 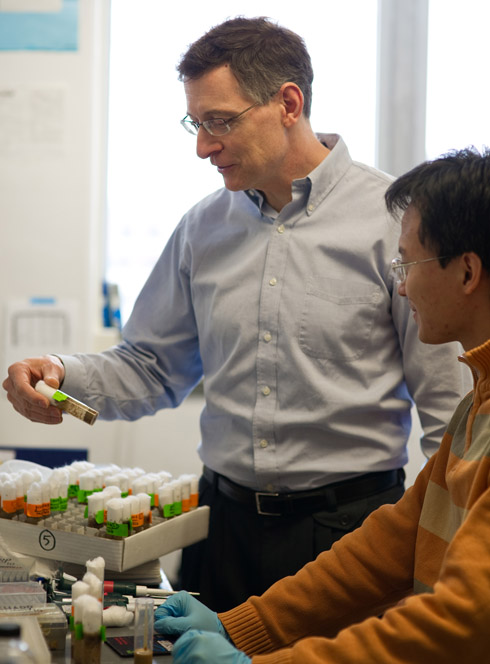 In sequencing the human genome, scientists have assembled a parts list and can point to genes that play a part in disease. Through Li’s and Arnosti’s research, however, scientists can now begin to see how these genes are regulated through special mechanisms, helping show how an entire organism’s genes are controlled.

“Mechanistic studies such as this are giving us the assembly instructions for the genome,” Arnosti said. “Basically, it’s giving us a way to read genomic control instructions.” 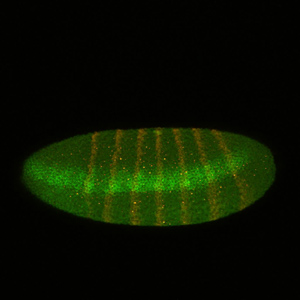 The fruit fly embryo has been stained to show gene expression patterns. Photo by Rupinder Sayal.

Arnosti’s research involved fruit flies, which have more genetic similarities to humans than was once thought. Based on these similarities, the team’s research could soon lead to advances in human medicine.

“We like to say that fruit flies are like little people with wings; they have the same basic genetic nuts and bolts, including genetic switches and proteins,” Arnosti said. “While our work is the first of its kind, it is only a small step for other scientists to begin conducting these same studies on human genes. With regards to disease, this study gives us the basic tools to look at genes in a disease state and understand what is going wrong at the genetic level.”

Arnosti’s research furthers the work of the GEDD, a group of MSU researchers using cutting-edge molecular approaches to understand mechanisms of gene regulation and promote excellence in training the next generation of biological researchers. One area that the group is promoting is integrated systems biology studies.

“By taking a systems biology approach, we’re beginning to understand that it’s not one bad gene that’s responsible for causing cancer,” Arnosti said. “We are starting to unravel how gene switches talk with one another as well as how a number of slightly defective genes interact to create a diseased state.”

Arnosti’s work is funded in part by the National Institutes of Health and the MSU Foundation.