Woods Hole Oceanographic Institution (WHOI) scientists have discovered that bacterial communication could have a significant impact on the planet’s climate.

In the ocean, bacteria coalesce on tiny particles of carbon-rich detritus sinking through the depths. WHOI marine biogeochemists Laura Hmelo, Benjamin Van Mooy, and Tracy Mincer found that these bacteria send out chemical signals to discern if other bacteria are in the neighborhood.  If enough of their cohorts are nearby, then bacteria en masse commence secreting enzymes that break up the carbon-containing molecules within the particles into more digestible bits. It has been suggested that coordinated expression of enzymes is very advantageous for bacteria on sinking particles, and Hmelo and her colleagues have uncovered the first proof of this in the ocean. 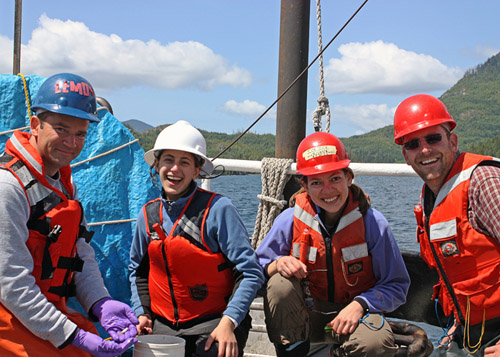 A team of biogeochemists from Woods Hole Oceanographic Institution traveled to Clayoquot Sound off Vancouver Island in 2009 to collect samples of particles of sinking marine detritus. They studied how marine bacteria coordinate their actions to break the particles apart. Aboard the research vessel Barnes are, from left, Tracy Mincer, Rose Kantor (a WHOI Summer Student Fellow), Laura Hmelo, and Benjamin Van Mooy. (Photo courtesy of Laura R. Hmelo)

“We don’t often think about bacteria making group decisions, but that is exactly what our data suggest is happening,” said Hmelo, now at the University of Washington.

The paper is published in the current online, “early view,” issue of Environmental Microbiology Reports. 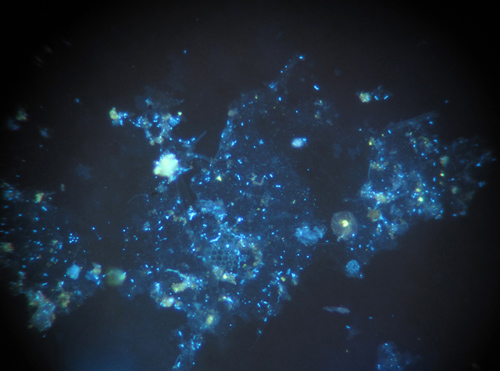 Tiny marine plants (phytoplankton) die or are eaten by tiny marine animals (zooplankton) which defecate into the water. All this detritus is sticky and agglomerates into heavier particles that sink. This epifluorescence micrograph of a stained gelatinous particle (about 200 microns in size) was harvested from a particle trap set 60 meters deep in Clayoquot Sound, British Columbia, Canada, in 2009. Note individual microbial cells (about 0.5 to 2 microns in length) embedded in gelatinous material together with other plankton “hard parts.” (Photo by Tracy Mincer, Woods Hole Oceanographic Institution)

“So microscopic bacteria buffer the amount of carbon dioxide in the atmosphere through their ‘conversations,’ ” Van Mooy said. “I think it’s amazing that there are a near- infinite number of these conversations going on in the ocean right now, and they are affecting Earth’s carbon cycle.”

The work was funded by the National Science Foundation and the Office of Naval Research.