AUSTIN, Texas — Scientists from The University of Texas at Austin, the Stanford University School of Medicine and two other institutions have discovered that bacteria have a system that can recognize and disrupt dangerous viruses using a newly identified mechanism involving ribonucleic acid (RNA). It is similar to the CRISPR/Cas system that captures foreign DNA. The discovery might lead to better ways to thwart viruses that kill agricultural crops and interfere with the production of dairy products such as cheese and yogurt.

The research appears online Feb. 25 in the journal Science.

The research team found for the first time that bacteria can snatch bits of RNA from invaders such as viruses and incorporate the RNA into their own genomes, using this information as something akin to mug shots. They then help the bacteria recognize and disrupt dangerous viruses in the future. 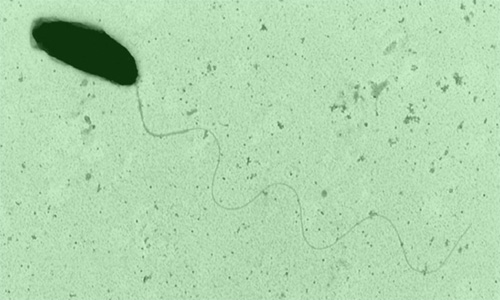 “This mechanism serves a defensive purpose in bacteria,” says Alan Lambowitz, director of the Institute for Cellular and Molecular Biology at UT Austin and co-senior author of the paper. “You could imagine transplanting it into other organisms and using it as a kind of virus detector.”

The newly discovered mechanism stores both DNA and RNA mug shots from viruses in a bacterium’s genome. That makes sense from an evolutionary standpoint, the researchers say, given that some viruses are DNA-based and some are RNA-based.

Lambowitz says that as a next step, researchers can examine how to genetically engineer a crop such as tomatoes so that each of their cells would carry this virus detector. Then the researchers could do controlled laboratory experiments in which they alter environmental conditions to see what effects the changes have on the transmission of pathogens.

“Combining these plants with the environment that they face, be it natural or involving the application of herbicides, insecticides or fungicides, could lead to the discovery of how pathogens are getting to these plants and what potential vectors could be,” says Georg Mohr, a research associate at UT Austin and co-first author of the paper.

Another application might be in the dairy industry, where viruses routinely infect the bacteria that produce cheese and yogurt, causing the production process to slow down or even preventing it from going to completion. Currently, preventing infections is complicated and costly. Lambowitz and Mohr say dairy bacteria could be engineered to record their virus interactions and defend against subsequent infections.

This RNA-based defense mechanism is closely related to a previously discovered mechanism, called CRISPR/Cas, in which bacteria snatch bits of DNA and store them as mug shots. That method has inspired a new way of editing the genomes of virtually any living organism, launching a revolution in biological research and sparking a patent war, but the researchers say they do not anticipate this new discovery will play a role in that sort of gene-editing. However, the enzymatic mechanism used to incorporate RNA segments into the genome is novel and has potential biotechnological applications.

Researchers discovered this novel defense mechanism in a type of bacteria commonly found in the ocean called Marinomonas mediterranea. It’s part of a class of microbes called Gammaproteobacteria, which include many human pathogens such as those that cause cholera, plague, lung infections and food poisoning.

Andrew Fire, a professor of pathology and of genetics at Stanford who shared the 2006 Nobel Prize in Physiology or Medicine for the discovery of RNA interference, is the co-senior author of the paper. Stanford graduate student Sukrit Silas is the co-first author.

Support for this research was provided by the National Institutes of Health and the Welch Foundation.