Bacteria can pass on memory to descendants, UCLA-led team discovers

Led by scientists at UCLA, an international team of researchers has discovered that bacteria have a “memory” that passes sensory knowledge from one generation of cells to the next, all without a central nervous system or any neurons.

“This is a huge surprise to us and to the field,” said Gerard Wong, a professor of bioengineering and of chemistry and biochemistry, member of the California NanoSystems Institute at UCLA and one of the study’s senior authors.

These findings are a major step toward understanding hard-to-treat infections caused by bacterial biofilms in people with cystic fibrosis. 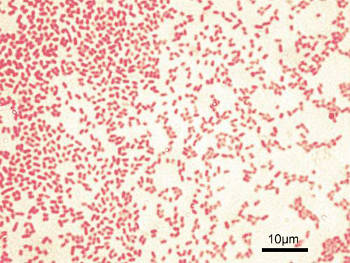 The researchers studied Pseudomonas aeruginosa, which forms biofilms in the airways of people with cystic fibrosis and can cause lethal infections. Image credit: Y_tambe – Y_tambe’s file (Source: Wikipedia)

The team studied a strain of bacteria called Pseudomonas aeruginosa that forms biofilms in the airways of people with cystic fibrosis and causes persistent infections that can be lethal. Bacterial biofilms can also form on surgical implants, like an artificial hip; when they do, they can cause the implant to fail. Bacterial biofilms are composed of genetically identical bacteria cells that can colonize nearly any surface and form communities in which single cells organize and cooperate.

“The first step in forming a biofilm is that bacteria must sense the surface and develop the ability to attach,” said Calvin Lee, a UCLA graduate student, and the study’s co-first author. “For the first time, we were able to follow the behavior of entire lineages of individual cells, and we discovered that the descendants could remember the surface sensing signals of their ancestors.”

The findings were published online in the Proceedings of the National Academy of Sciences and will appear later in the journal’s print edition.

“It was really exciting to me that we’ve learned how reversible and irreversible attachment are linked during early biofilm formation,” said George O’Toole, the study’s collaborating senior author and a professor at the Geisel School of Medicine at Dartmouth. “These concepts were described in the 1930s, but it took us almost 90 years to understand how they work hand-in-hand to help drive early biofilm formation.”

To analyze cells that are in the process of “sensing” the surface, the scientists used a multigenerational cell tracking method that was developed by Wong’s research group, along with several other data analysis methods, including one signal processing technique that is more commonly used to analyze pitch in music — the first known application of this technique for biological measurements.

The approach revealed that two events were linked in a rhythmic pattern: the expression of cyclic AMP, a signaling molecule inside bacterial cells, and the activity level of type IV pili, the appendages on bacteria cells that are involved in the cells’ movement. The study revealed that the events are separated by only a few hours.

“Bacteria sense and remember via this rhythmic pattern, which is pivotal for their decision to suppress motility, become stationary and ultimately attach to a surface irreversibly and form a biofilm,” Wong said.

Ramin Golestanian, a collaborating senior author of the study and the director of the Max Planck Institute for Dynamics and Self-Organization, said: “I was pleasantly surprised to discover how much can be learned about the decision-making process of bacteria during the early stages of biofilm formation by compiling a rigorous multiscale characterization of the system from the molecular level all the way up to the level of the biofilm.”

The study’s other authors include Jaime de Anda, a UCLA graduate student and co-first author, and Kun Zhao of China’s Tianjin University. The research was supported in part by a Human Frontiers Science program grant, the National Institutes of Health, the Recruitment Program of Global Experts, the National Science Foundation and the National Cancer Institute of the NIH.