Ricardo “Cobe” Williams isn’t shy about admitting his troubled past.

“For most of my life, I was part of the problem,” Williams told a group of students in the Master of Arts Program in the Humanities (MAPH) last month.

But Williams, who spent a combined 13-and- a-half years in prison, has dedicated his life to preventing others from following in his footsteps.

Williams is a “violence interrupter” for CeaseFire, an organization founded by Gary Slutkin, MD’75, that aims to prevent shootings by intervening in conflicts before they become violent. Many of CeaseFire’s interrupters previously have committed violent crimes or have been involved with gangs. 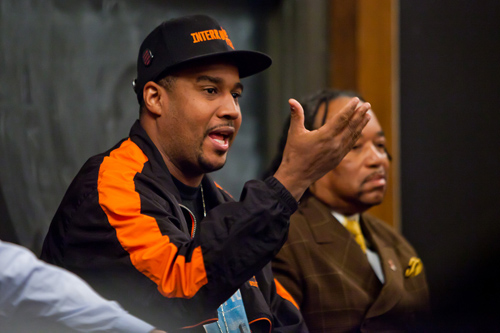 Ricardo "Cobe" Williams speaks to a group of students in the Master of Arts Program in the Humanities (MAPH) at a Nov. 11 event. Students gathered for a screening of the new Kartemquin Films' documentary The Interrupters, in which Williams appears. Williams discussed his work on the streets of Chicago as an interrupter of violence for the CeaseFire organization. Photo by Jason Smith

Williams came to UChicago to discuss Kartemquin Films’ acclaimed new documentary, “The Interrupters,” which follows three CeaseFire interrupters over the course of one year in Chicago. (The film is based on a 2008 New York Times Magazine article by former Vare writer-in-residence Alex Kotlowitz.)

Williams’ visit and a screening of the film were offered as part of MAPH’s new Service Core program, which helps to raise awareness about service opportunities throughout the city.

After the screening, Williams and fellow interrupter Ulysses Floyd spoke about their involvement with CeaseFire. 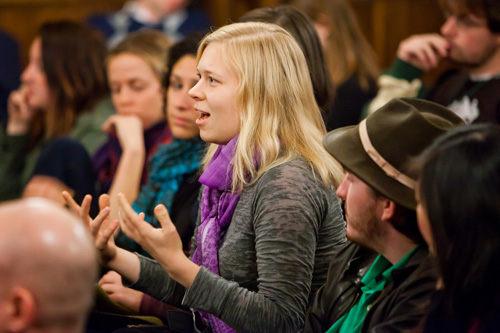 A MAPH student poses a question for the CeaseFire interrupters. Photo by Jason Smith

Throughout the discussion, Williams and Floyd emphasized one of the CeaseFire’s major tenets: violence “spreads like a disease,” Williams said. To treat the epidemic, interrupters must reach the individuals most likely to be involved in violence, including those who are actively involved in criminal activity.

The interrupters, who receive special training in dispute mediation, are intensely focused on one goal: preventing violence. They do not work to dismantle gangs or prevent the sale of drugs. When conflicts or tensions arise, they attempt to promote nonviolent conflict resolution, without passing judgment on the parties involved. 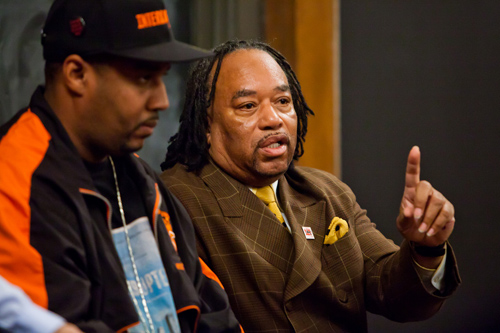 Ulysses Floyd, also a CeaseFire interrupter, accompanied Ricardo "Cobe" Williams to the film screening and discussion about their work on the streets to save lives. Most of the interrupters were previously involved in criminal activity or gangs, including Williams who has served a combined 13.5 years in prison. Photo by Jason Smith

“We meet people where they are,” Williams said.

Intervening in conflicts can be exhausting, even dangerous. Still, “somebody got to do this job,” Williams said. “We were part of the problem. Why not put your life on the line to be part of the solution?”

Neither Williams nor Floyd regretted their decision to become involved with CeaseFire. “I’ve attended a lot of funerals in my six and a half years in Woodlawn,” Floyd said. “But I’ve attended some graduations, too.”