Former Apollo astronauts at a space symposium on May 8 doubted whether commercial companies will be able to accomplish human space travel, while representatives of those companies talked about redefining what it means to succeed—or fail—in such grand endeavors.

Current and former NASA administrators and an expert on space law were among the panelists on the Ohio State University campus for the Armstrong Space Symposium. The event preceded the formal installation of aerospace innovator John M. Horack as the university’s first Neil Armstrong Chair in Aerospace Policy.

Lively discussion centered on whether humans should venture next to the moon or Mars, how to get there, and who will get there first.

“I think there may be a confluence of events in the world today that will predicate another landing on the moon, but it won’t be [by the United States],” Apollo 15 astronaut Al Worden said. “I think it might be China.”

Apollo 17 astronaut Harrison Schmitt disagreed with that prediction, but he did agree that China has big ambitions in space. “They understand what we taught them with Apollo,” he said. “Dominating space is a critical step toward dominating the geopolitical culture of the Earth.” 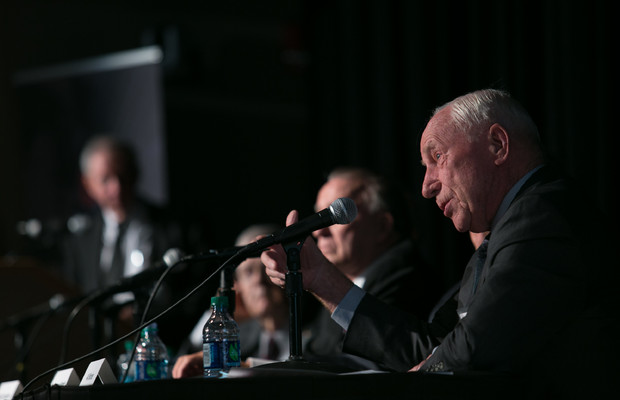 As to whether billionaire-funded companies like SpaceX, Virgin Galactic or Blue Origin will carry humans to space before any world governments do, former NASA administrator Michael Griffin asserted that commercial ventures “are not substitutes for national will…for a belief by our nation that we should be preeminent in space.”

Worden said that he favors Mars as the next target for exploration, and got a laugh from the audience when he suggested that being an 85-year-old retiree gives him the ideal mix of patience and fortitude for the tedious months-long journey.

There wasn’t a representative of SpaceX on hand, but Will Pomerantz, vice president for special projects at Virgin Galactic, responded by saying he’s had many discussions with NASA engineers who are daunted by the enormity of their own task. “All this stuff is harder than anyone thought,” he said.

Ken Davidian, director for research at the Federal Aviation Administration Office of Commercial Space Transportation, called Collins’ reaction a normal response to the uncertainty that accompanies the launch of a new industry. The idea of commercial space travel may seem irrational now, he said, but in the future, who knows? “We’re lucky that we have [people] as ‘irrational’ as Jeff Bezos and Elon Musk that they’re willing to pursue these goals.”

Todd May, director of NASA’s Marshall Space Flight Center, pointed out that more than half of NASA’s robotic missions to Mars have failed. Sending humans to Mars, he said, “is going to take all we got—NASA and the billionaires and the private space agencies. It’s going to take all mankind.”

Some panelists wondered aloud whether the best rocket fuel is youth. The average employee age at places like SpaceX today is below 30.

Schmitt commented that the success of the Apollo program was due in part to the fact that the astronauts and many people on the NASA staff at the time were similarly young. “We didn’t know how to fail yet,” he said. “It’s young people who make these things happen.”

Walt Cunningham of Apollo 7 explained why he and his fellow astronauts felt they were up to the task back then, despite their young age: “We were all fighter pilots and test pilots, and we knew what we could do.”

Clay Mowry, vice president of global sales for Blue Origin, admitted to a certain amount of idealistic enthusiasm in the company’s ethos. “Our motto is Gradatim Ferociter, or ‘step by step, ferociously,’” he said. “We do sometimes get ahead of ourselves.”

But, Pomerantz said, today’s engineers take a different approach to failure than NASA did in the 60s. The tagline to the movie Apollo 13 was “failure is not an option,” and though that particular phrase was a work of fiction, it did accurately reflect the attitude at NASA at the time. Lives were lost in Apollo 1, and during Apollo 13 lives were in grave danger.

“One thing we are doing in aerospace now is to fail sooner and with fewer consequences,” Pomerantz explained. “We want to fail in little ways in a controlled environment so we can learn from it.

“I like to say, ‘failure is not an option; it comes standard.’”

The young upstarts must be doing right, since SpaceX has delivered NASA cargo to the International Space Station, and Sierra Nevada Corporation—the most traditional of the aerospace companies in attendance, since it’s not funded by a billionaire—has won a contract to help build the next-generation space station.

When humans finally do venture beyond the low-Earth orbit of the space station, Horack said, we should go to the moon first—and stay there for a while.

“We should pursue the moon as a proving ground for Mars. Moon infrastructure is the next step,” he said.

Lesley Jane Smith, general counsel for the International Astronautical Foundation, cited some of the legal issues surrounding a lunar settlement and the development of space infrastructure in general. According to international law, no single country can own property on the moon, for instance.

“International cooperation is what we all work for,” she explained. “That cooperation is often referred to by governments in trade contexts.” The World Trade Organization compels all space programs above a certain size to buy at least some of their nonclassified equipment from foreign partners—a move by the international community to help world powers stay connected in space.

Horack was the only one of the day’s speakers to explicitly reference the current political tensions between the U.S. and Russia when he said, “Obviously, our current relationship with Russia is complex. But disrupting collaboration in spaceflight as a result of political differences on Earth remains ‘off the table.’”

The U.S. must also initiate a civil spaceflight collaboration with China, he said, because it will greatly improve our relationship with China on Earth, as it once did with Russia when we cooperated in space during the Cold War.

As the Armstrong Chair, Horack will hold a joint appointment in the John Glenn College of Public Affairs and the College of Engineering, bridging the worlds of technology and policy within the university. With previous experience in both government and industry sides of aerospace, he’s expected to enhance Ohio State’s relationship with its external aerospace partners, including Wright Patterson Air Force Base, NASA Glenn and the Ohio Aerospace Institute.

He listed some of the reasons why Ohio is already a leader in space.

According to the World Bank, Ohio’s economy—if you separated it from the rest of the United States—would rank 21st in the world, just below Saudi Arabia. Ohio hosts $7.6 billion in economic activity from the aerospace industry. Ohio has produced more NASA astronauts than any other state. The university is perfectly positioned to unify other parts of the state and make Ohio peerless in spaceflight, he said.

“We are big, we are powerful, we are a coordinated machine,” Horack concluded.

The Neil Armstrong Chair in Aerospace Policy supports intellectual thought and political leadership in the area of aerospace policy, and pioneers preeminent research and student learning in this field. The chair is funded through a gift from Huntington Bank, celebrating the 50th anniversary of Sen. John Glenn’s flight in Friendship 7, as well as funds from the Ohio State University Discovery Themes.