Space weathering — a darkening of lunar surfaces by solar wind and metal nanoparticles from vaporized meteorites — appears to happen differently on Vesta, the largest body in the asteroid belt. The discovery, from NASA’s Dawn spacecraft, has planetary geologists returning to their lunar data for another look and further analysis.

PROVIDENCE, R.I. [Brown University] — The surface of the giant asteroid Vesta is weathering in a way that appears to be completely different from any other asteroid yet visited, according to new data recorded by NASA’s Dawn spacecraft. This new type of space weathering suggests that there’s something about Vesta — perhaps its mineral composition or its position in the solar system — that makes its surface environment fundamentally different from other asteroids studied thus far.

The new data are presented in a paper published Nov. 1, 2012, in the journal Nature. 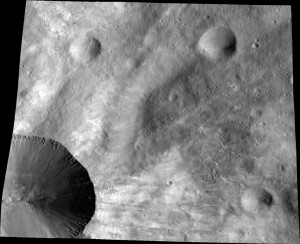 Canuleia up close. Dawn’s Low Altitude Mapping Orbit (LAMO) image of the crater Canuleia illustrates the interior of the crater and complex details of the fresh rays across the soil of the asteroid Vesta. Image credit: NASA/JPL-Caltech/UCLA/MPS/DLR/PSI/Brown

Space weathering is the term used to describe how the surfaces of airless bodies like asteroids and some moons change over time. The phenomenon was first identified on our own Moon. Soil ejected from fresh impact craters looks brighter than the surrounding background soil, often forming bright rays streaming away from the crater. It wasn’t clear at first why newly exposed soil would look different.

As laboratory equipment improved, scientists eventually showed that soils darken over time on the lunar surface because they are exposed to a constant barrage of tiny meteorites as well as energetic particles from the sun known as the solar wind. As these materials interact with the surface, they produce a fine coating of metal nanoparticles that builds up on soil grains over time, darkening the soil. Deeply buried material lacks that coating, so when it’s churned up by a large meteorite impact, it has a brighter appearance than the weathered soil.

This same type of space weathering involving metal nanoparticles was later found to occur on several asteroids as well.

“We thought we understood this pretty well,” said Brown University geologist Carle Pieters, one of the original scientists to study the phenomenon. “That’s space weathering.” Or at least it was until the Dawn spacecraft showed that Vesta, one of the largest bodies in the asteroid belt, weathers in a completely different way.

As on the Moon, soil ejected from craters on Vesta looks different from background soil, so it’s clear that some kind of weathering is taking place on Vesta. But using Dawn’s visible and infrared spectrometer, Pieters and colleagues found that weathered soil on Vesta doesn’t have any of the nanophase metal that characterizes weathered soil on the Moon and some asteroids.

“We know that the surface of Vesta is weathering,” Pieters said, “but it can’t be happening in the same way as these other bodies.” 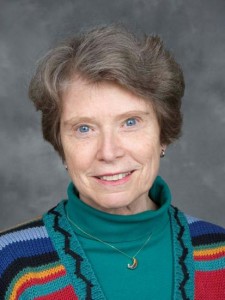 Carle Pieters. “We know that the surface of Vesta is weathering, but it can’t be happening in the same way as these other bodies.” Image credit: Brown University

Weathering on Vesta appears to happen through meteorite impacts that mix soils mechanically, not through creation of the nanophase metals like on the Moon. “Think of it like throwing a rock in a sandbox,” Pieters said. “You’re not altering the sand in any fundamental way. You’re just tossing it around.”

The trick now is figuring out why the nanophase weathering so pervasive on the Moon doesn’t seem to happen on Vesta. One possibility is that the meteorites hitting Vesta don’t vaporize as they often do on the Moon, or perhaps the solar wind is too weak out in the asteroid belt, making the formation of nanoparticles less likely, Pieters said. The prevalence of mechanical mixing could have something to do with how the gravitational characteristics of Vesta allows particles to move or with Vesta’s initial mineral composition.

“It could be a lot of things,” Pieters said. “That’s the next problem we’re working on now.”

Pieters also plans to go back and re-examine space weathering processes on the Moon and other asteroids.

“There are probably things we’ve overlooked on other asteroids because we’ve just been concentrating on the nanophase coatings,” she said. “But Vesta has shown us that this mixing process is really very important.”

Dawn’s mission is managed by the Jet Propulsion Laboratory for NASA’s Science Mission Directorate in Washington. Dawn is a project of the directorate’s Discovery Program, managed by NASA’s Marshall Space Flight Center in Huntsville, Ala. UCLA is responsible for overall Dawn mission science. Orbital Sciences Corp. in Dulles, Va., designed and built the spacecraft. The German Aerospace Center, the Max Planck Institute for Solar System Research, the Italian Space Agency, and the Italian National Astrophysical Institute are international partners on the mission team.