With their long, spiky legs and their propensity for eating anything, including each other, camel crickets are the stuff of nightmares. Research from North Carolina State University finds that non-native camel cricket species have spread into homes across the eastern United States.

“The good news is that camel crickets don’t bite or pose any kind of threat to humans,” says Dr. Mary Jane Epps, a postdoctoral researcher at NC State and lead author of a paper about the research. 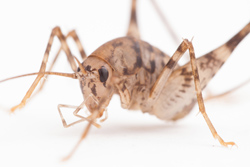 The research stems from a chance encounter, when a cricket taxonomist found an invasive cricket in the home of one of the NC State researchers. Wondering how common the species might be in the U.S., the researchers tapped in to their citizen science network, which is part of Dr. Rob Dunn’s Your Wild Life lab. Dunn is an associate professor of biological sciences at NC State and co-author of the paper.

The researchers asked the public whether they had camel crickets (also known as cave crickets) in their homes and, if so, to send in photos or mail in physical specimens. The responses they got were surprising.

The most common species reported, by more than 90 percent of respondents, was the greenhouse camel cricket (Diestrammena asynamora). Native to Asia, this species was first sighted in the U.S. in the 19th century – but it was thought to be rare outside of commercial greenhouses. Instead, the researchers found that it is now far more common than native camel crickets in and near homes east of the Mississippi.

“We don’t know what kind of impact this species has on local ecosystems though it’s possible that the greenhouse camel cricket could be driving out native camel cricket species in homes,” Epps says.

The researchers also sampled the yards of 10 homes in Raleigh, North Carolina. They found large numbers of greenhouse camel crickets, with higher numbers being found in the areas of the yards closest to homes.

The photos submitted by the public turned up a second surprise as well.

“There appears to be a second Asian species, Diestrammena japanica, that hasn’t been formally reported in the U.S. before, but seems to be showing up in homes in the Northeast,” Epps says. “However, that species has only been identified based on photos. We’d love to get a physical specimen to determine whether it is D. japanica.”

The researchers stress that homeowners shouldn’t panic if they find camel crickets in their homes.

“Because they are scavengers, camel crickets may actually provide an important service in our basements or garages, eating the dead stuff that accumulates there,” says Dr. Holly Menninger, director of public science in the Your Wild Life lab at NC State and co-author of the paper.

“We know remarkably little about these camel crickets, such as their biology or how they interact with other species,” Menninger says. “We’re interested in continuing to study them, and there’s a lot to learn.”

The paper, “Too big to be noticed: Cryptic invasion of Asian camel crickets in North American houses,” is published online in the open-access journal PeerJ. The paper was co-authored by Nathan LaSala, who did the work while a student at Enloe High School. The research was supported by National Science Foundation grant number 0953390.