In the wake of the sobering news that atmospheric carbon dioxide is now at its highest level in at least three million years, an important advance in the race to develop carbon-neutral renewable energy sources has been achieved. Scientists with the U.S. Department of Energy (DOE)’s Lawrence Berkeley National Laboratory (Berkeley Lab) have reported the first fully integrated nanosystem for artificial photosynthesis. While “artificial leaf” is the popular term for such a system, the key to this success was an “artificial forest.”

“Similar to the chloroplasts in green plants that carry out photosynthesis, our artificial photosynthetic system is composed of two semiconductor light absorbers, an interfacial layer for charge transport, and spatially separated co-catalysts,” says Peidong Yang, a chemist with Berkeley Lab’s Materials Sciences Division, who led this research. “To facilitate solar water- splitting in our system, we synthesized tree-like nanowire  heterostructures, consisting of silicon trunks and titanium oxide branches. Visually, arrays of these nanostructures very much resemble an artificial forest.” 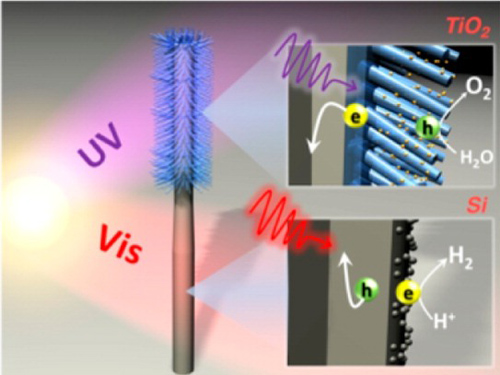 Schematic shows TiO2 nanowires (blue) grown on the upper half of a Si nanowire (gray) and the two absorbing different regions of the solar spectrum. Insets display photoexcited electron−hole pairs separated at the semiconductor-electrolyte interface to carry out water splitting with the help of co-catalysts (yellow and gray dots). Image credit: Berkeley Lab

Yang, who also holds appointments with the University of California Berkeley’s Chemistry Department and Department of Materials Science and Engineering, is the corresponding author of a paper describing this research in the journal NANO Letters. The paper is titled “A Fully Integrated Nanosystem of Semiconductor Nanowires for Direct Solar Water Splitting.” Co-authors are Chong Liu, Jinyao Tang, Hao Ming Chen and Bin Liu.

Solar technologies are the ideal solutions for carbon-neutral renewable energy – there’s enough energy in one hour’s worth of global sunlight to meet all human needs for a year. Artificial photosynthesis, in which solar energy is directly converted into chemical fuels, is regarded as one of the most promising of solar technologies. A major challenge for artificial photosynthesis is to produce hydrogen cheaply enough to compete with fossil fuels. Meeting this challenge requires an integrated system that can efficiently absorb sunlight and produce charge-carriers to drive separate water reduction and oxidation half-reactions. 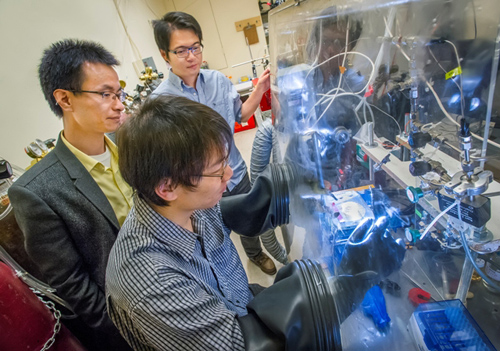 “In natural photosynthesis the energy of absorbed sunlight produces energized charge-carriers that execute chemical reactions in separate regions of the chloroplast,” Yang says. “We’ve integrated our nanowire nanoscale heterostructure into a functional system that mimics the integration in chloroplasts and provides a conceptual blueprint for better solar-to-fuel conversion efficiencies in the future.”

When sunlight is absorbed by pigment molecules in a chloroplast, an energized electron is generated that moves from molecule to molecule through a transport chain until ultimately it drives the conversion of carbon dioxide into carbohydrate sugars. This electron transport chain is called a “Z-scheme” because the pattern of movement resembles the letter Z on its side. Yang and his colleagues also use a Z-scheme in their system only they deploy two Earth abundant and stable semiconductors – silicon and titanium oxide – loaded with co-catalysts and with an ohmic contact inserted between them. Silicon was used for the hydrogen-generating photocathode and titanium oxide for the oxygen-generating photoanode. The tree-like architecture was used to maximize the system’s performance. Like trees in a real forest, the dense arrays of artificial nanowire trees suppress sunlight reflection and provide more surface area for fuel producing reactions.

“Upon illumination photo-excited electron−hole pairs are generated in silicon and titanium oxide, which absorb different regions of the solar spectrum,” Yang says. “The photo-generated electrons in the silicon nanowires migrate to the surface and reduce protons to generate hydrogen while the photo-generated holes in the titanium oxide nanowires oxidize water to evolve  oxygen molecules. The majority charge carriers from both semiconductors recombine at the ohmic contact, completing the relay of the Z-scheme, similar to that of natural photosynthesis.”

Under simulated sunlight, this integrated nanowire-based artificial photosynthesis system achieved a 0.12-percent solar-to-fuel conversion efficiency. Although comparable to some natural photosynthetic conversion efficiencies, this rate will have to be substantially improved for commercial use. However, the modular design of this system allows for newly discovered individual components to be readily incorporated to improve its performance. For example, Yang notes that the photocurrent output from the system’s silicon cathodes and titanium oxide anodes do not match, and that the lower photocurrent output from the anodes is limiting the system’s overall performance.

“We have some good ideas to develop stable photoanodes with better performance than titanium oxide,” Yang says. “We’re confident that we will be able to replace titanium oxide anodes in the near future and push the energy conversion efficiency up into single digit percentages.”